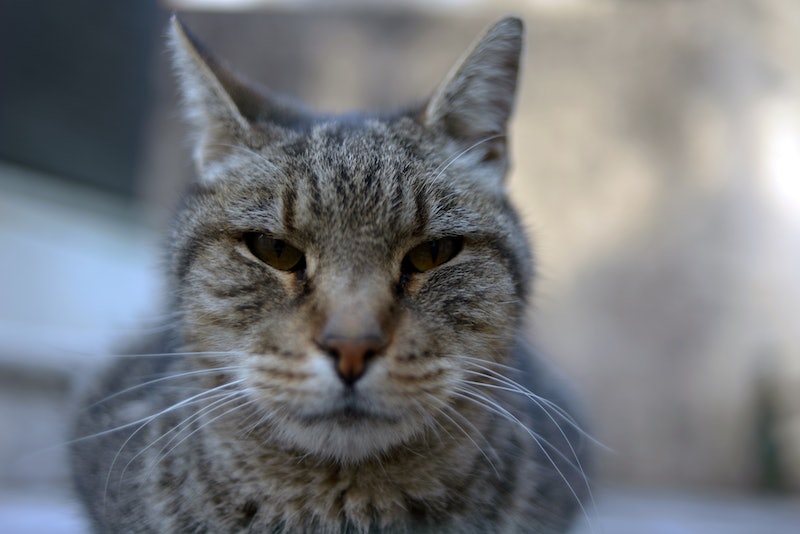 When you think of weird presidential candidates, you probably think of oddballs like Ross Perot or third party candidates like Jill Scott — or maybe even Donald Trump, who is a category unto himself. However, all of them are probably beat by Limberbutt McCubbins, a cat who's running for President in 2016. Would you vote for the Louisville, KY native over some of the other candidates in the field? I think I might.

Despite the fact that he is a cat, McCubbins has filed official paperwork to be a candidate — or rather, it was filed on his behalf by Isaac Weiss, a rising high school senior and friend of Limberbutt McCubbins's owner, Emilee McCubbins. Weiss has registered “The Committee for the Installation of Limberbutt” with Federal Election Commission via their website, and has listed Limberbutt McCubbins as a Democrat. Or rather, a "demo-cat," according to Weiss.

Weiss told his local NPR affiliate that he and his friends have already received lots of letters and emails asking about Limberbutt McCubbins's candidacy — people looking to volunteer, one from a lawyer looking to represent him, and even some asking about McCubbins's citizenship. Weiss said he didn't think these people realized that McCubbins is a cat.

It's also unclear whether McCubbins' age disqualifies him for office. The Constitution requires the president to be at least 35; McCubbins is only five in human years, but 38 in cat years. Which number should be considered his official age? It's quite the conundrum.

Regardless, the people seem to like the idea of Limberbutt McCubbins as leader of the free world. His Facebook page has been liked over 2,000 times, and he has a few hundred Twitter followers, along with his own hashtag: #MeowIsTheTime.

As Weiss pointed out to NPR, it's pretty easy to run for president, which is why a cat is able to run — and why there have been lots of odd candidates over the years.

Here are eight of the wackiest candidates to make a bid for the White House.

Rapper Waka Flocka Flame announced on 4/20 this year that he is running for president. He also stated that his first order of business would be to legalize marijuana, followed by things like "banning people with big feet." So if you are pro-marijuana and anti-Big Foot, this is the candidate for you!

In 2008, comedian Stephen Colbert ran for president — or rather, the character Stephen Colbert, played by satirist Stephen Colbert, ran for president. He was ultimately not able to get on the ballot in his native South Carolina, where he had originally planned to run in both the Democratic and Republican primaries. The campaign was sponsored by Doritos; he considered making Vladamir Putin his running mate; Lord of the Rings references were involved in the announcement; it was a good time.

Colbert isn't the only comedian to make a go at the White House in recent years — not by a long shot. And in fact, Roseanne Barr's bid in 2012 on the Peace and Freedom Ticket was arguably more successful. She actually was on the ballot, and placed fifth in the election overall. Not bad, Roseanne. American politics are so weird.

Ever heard of the American Vegetarian Party? Oddly enough, this one is not a recent invention. It was formed back in the 1940s, and their first candidate was Jonathan Maxwell, the 85-year-old, British-born owner of a vegetarian restaurant in Chicago who claimed to not have eaten meat in 45 years and to love "every vegetable except okra." What his other qualifications might have been is unclear, but he hoped to win the votes of every vegetarian in the U.S.

Would you vote for someone who's real, legal name was Vermin Supreme? How about a man who wears a boot on his head and whose platform includes giving every American a pony? Vermin Supreme has run for president multiple times before as a performance artist mocking the process, but has hinted that in 2016 he might actually try going legit and running for real. So that's... interesting.

Stunt candidacy was not invented in the 21st century, nor is Limberbutt McCubbins the first non-human to run for office. In 1968, Pigasus the Immortal, a 160 pound hog whose name was a play on "Pegasus" and the saying "when pigs fly," was nominated by the Youth International Party just before the beginning of the famously turbulent Democratic National Convention in 1968. The party members insisted he be treated as a legitimate candidate, including getting Secret Service protection. Instead, Pigasus and his supporters were arrested at the announcement. This is the American history they never teach you in school.

Although you've probably never heard of him, Homer Aubrey Tomlinson ran for president five times, in every election from 1952 until his death in 1968, as a candidate for his own "Theocratic Party" which at least was refreshingly honest in naming itself. Tomlinson, a New York City preacher, wanted to replace taxes with "tithing" and institute a cabinet secretary of "Righteousness." When he realized that his dreams of getting elected weren't working out, he decided to bypass the democratic process and declare himself King of the World, holding coronation ceremonies in over 100 countries.

Yes there is a "Godzilla for President" Facebook page. Why do you ask? Their message is, "Sick of the political parties destroying this country? Vote for the candidate who knows how to do it! Vote Godzilla!"