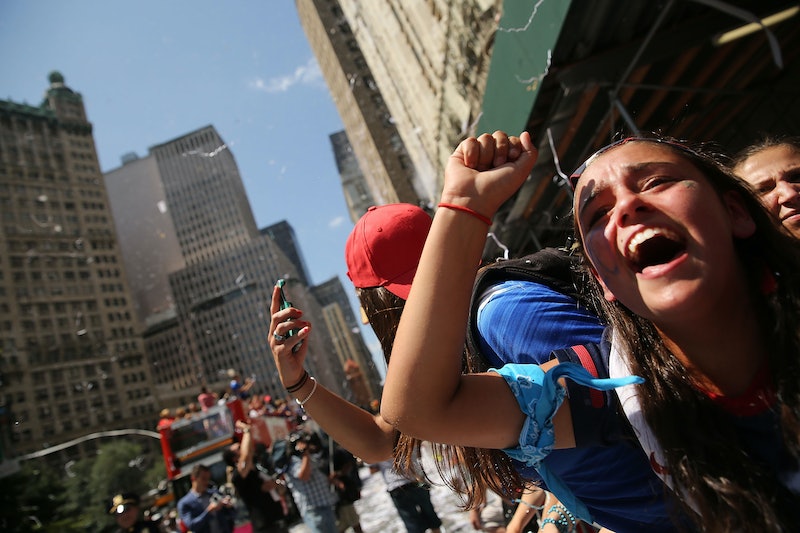 It's been 55 years since a female athlete was honored with a ticker-tape parade in New York City. Prior to Friday's celebration, Olympic gold medal–winning figure skater Carol Heiss Jenkins was the last woman to be honored. A New York native, Jenkins was just 20 years old when she rode through the Canyon of Heroes surrounded by adoring fans in 1960. The U.S. Women's Soccer Team ticker-tape parade is a bigger deal than you probably realized — it's just the second to honor great women athletes in over five decades. That said, there should have been so many more parades like this.

What did Jenkins do prior to retiring in 1962? Completely dominated the world of professional figure skating. She became World Figure Skating Champion in 1956 and held onto that title for four years, earning a silver medal at the 1956 Winter Olympics and winning gold at the 1960 Games. Jenkins' athleticism captured the imagination of the entire country. She was the first woman to successfully perform a double axel, putting her in a class all her own.

The Olympic champion, who avidly watched the Women's World Cup, penned a supportive open letter to the U.S. Women's Soccer Team on Thursday, expressing surprise that it had been so long since a ticker-tape parade honored a female athlete:

I had no idea that I was the last woman athlete to be honored with a ticker-tape parade until reporters started contacting me about it this week. It took a long time to honor other women athletes but I am glad you are the women who will have that honor. To win a third World Cup for the United States was no easy task. Having competed at the Olympic and World level, I understand the enormous pressures you faced and know what an incredible feeling it is to perform well under those circumstances and with so many people watching

A similarly dominating athlete in her respective sport who should've earned such honors is tennis' Billie Jean King. Just as Jenkins was hitting her stride in skating, King was entering the world of competitive tennis in 1958. She would go on to win Wimbledon in 1966 and hold onto that title for two years before turning pro in 1968. King cumulatively won 20 Wimbledon titles, advocated for equal pay, and established the Women's Sports Foundation, whose International Women's Sports Hall of Fame spans dozens of trailblazing female athletes. King's handy defeat of men's Wimbledon champion Bobby Riggs in a 1973 "Battle of the Sexes" would've certainly benefited from the celebration of a ticker-tape parade.

Here's just a brief list of other female athletes and women's sports teams who deserved the honor of a ticker-tape parade:

The list of female athletes and sports teams whose sheer power and strength deserve celebration is seemingly endless. Typically, the sports teams that get honored with ticker-tape parades in New York City hail from the metro area, however. The Yankees have been through nine, while the Mets have had three. Unfortunately, the only professional women's team based out of the Big Apple is the championship-less New York Liberty. The WNBA team is currently in second place in the Eastern Conference — just half a game behind the Connecticut Suns. Here's hoping the Liberty pull through and even more great women athletes get their dues.