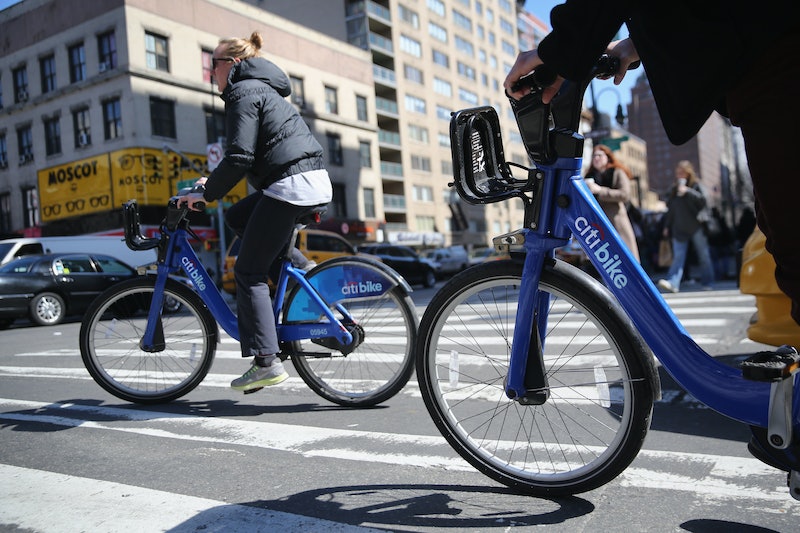 Citibank's Citi Bike program in New York took the news by storm when it launched two years ago. The program's idea of providing bikes for fixed periods of time to people who didn't want to own bikes or deal with parking them was celebrated as an innovative transportation method and a clever marketing technique. And Citi Bike has caught on since — but only among men. The number of Citi Bike trip taken by women remains less than 25 percent. Why is that?

This disparity isn't unique to Citi Bike; throughout the country, men take two bike trips for every trip a woman takes. Rutgers University professor Kelcie Ralph told New York Magazine that women may be more concerned about biking safety, given research suggesting that women are less risk-averse, perhaps due to societal expectations. Citi Bike riders have indeed been injured, though none have been killed; furthermore, in countries like Denmark and the Netherlands where biking is safer, the gender gap disappears.

Cycling is a great way to get where you need to go quickly while getting exercise, so women should be able to do it as often as men. Here are some other advantages that would be more available to women if it weren't for unequal division of household labor.

“The No. 1 impediment to women succeeding in the workforce is now in the home," Sheryl Sandberg told The New Yorker in 2011. "Most people assume that women are responsible for households and child care. Most couples operate that way — not all. That fundamental assumption holds women back.” According to a Harvard Business School study, women are far more likely than men to feel guilty about working when they have families at home. The more households tasks men take on, the more comfortable women in heterosexual relationships will feel prioritizing their careers and the more money they'll have the time to make.

One study showed that kids with working mothers tend to be better students with fewer emotional problems, and a survey asking children about their parents' work-life balance found that many wish their fathers were home more often. While the ideal arrangement is different for every situation, in the aggregate, evening out the division of household labor would give children more positive female role models and more present male figures.

Apparently men are beating women in the whole "having fun" department. This is a pretty profound inequality, since having fun is almost synonymous with happiness. According to one Pew Research analysis, men spend five hours more than women per week exercising, watching TV, and engaging in other relaxing activities. The study's authors suggest this is largely because women are spending what would be free time on household chores and childcare.

One reason women are less likely to rise to the top of their companies may be that they don't have the chance to make the professional connections necessary to be noticed. Networking events, activities with coworkers, and even un-work-related activities (going back to the whole free time disparity) can provide people with both additional assignments at their current jobs and new job opportunities.

When heterosexual couples experience unequal divisions of household labor, other aspects of men's and women's lives become unequal as well. So if you want to tackle the problem of gender inequality, a good place to start is at home. Images: Payton Chung /Flickr; Getty Images (4)