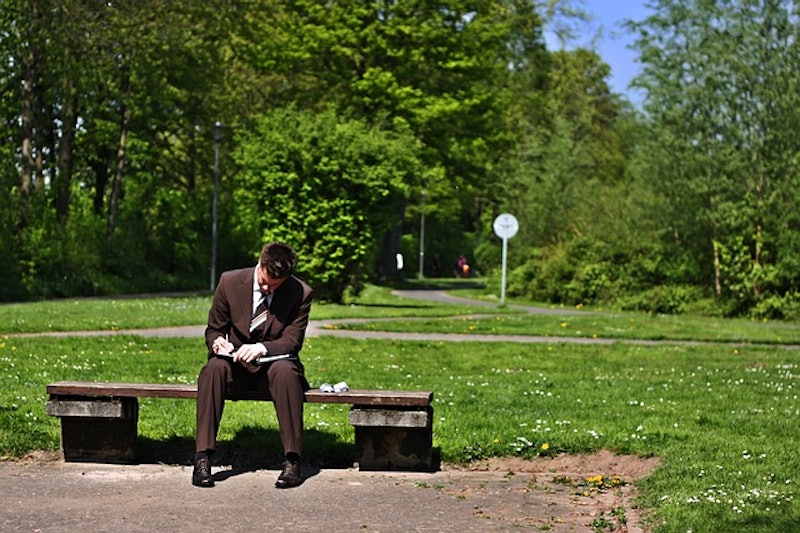 Naptime at the office. Business meetings in a sauna. Sadly, these practices are not evidence that your fantasy of living permanently inside a spa has finally come true (IF ONLY). Rather, they are the normal business habits of certain nations outside the U.S. Right now we live in a truly global civilization, with the ability to virtually “travel” anywhere we’d like at the drop of a hat (or click of the mouse, as it were). The Internet allows instant communication across borders and often shows us that people across the globe have an awful lot in common. However, the very technology that demonstrates our similarities also reveals the unexpected ways that we are different from culture to culture, letting us glimpse the random, strange habits that are unique to particular groups of people.

Many nations outside the U.S. have workplace customs that would seem odd to most American workers, but we should remember that the U.S. is rife with work standards that would seem bizarre to people elsewhere (cough cough no paid maternity leave cough cough). Keep reading for 6 international work habits that may seem unusual to American eyes. Who knows? You might just learn about a custom that you can’t wait to implement in your own work life. I think this first one would be one of mine:

Japanese workers are some of the most underslept in the world, averaging six hours and 22 minutes of sleep on work nights, so it’s no surprise that many seek a few Zzzz during the day. Japan has a practice called “inemuri,” which literally means “being present while sleeping.” The idea is that it’s OK to sleep on the job — and even in front of other employees, in meetings and similar gatherings — if you’re doing so because you work so hard that you’re incapable of staying awake. The Guardian calls inemuri “an honourable kind of minor failure”; it’s seen as a sign of dedication, rather than laziness. There are rules to the practice, however: The more seniority you have, the more leeway you have to sleep, and you must maintain the appearance of trying to be awake. That means that it’s OK to fall asleep while sitting upright in a meeting or at your desk, but it would be frowned upon for a worker to crawl under the table and sleep on the floor.

In recent years, some Japanese businesses have taken inemuri a step further, and have begun actively encouraging workers to take naps. Some firms provide couches or cots for short power naps, while others allow employees to sleep at their desks or in their offices.

2. Business meetings in the sauna.

In Finland, saunas are an important part of many people’s everyday lives. With a population of 5.3 million, Finland has 3.3 million of the heated, steamy rooms, in settings ranging from homes to businesses to state offices. Although the idea of stripping down and sweating alongside bosses or clients would fill many Americans with dread, in Finland, being invited to continue a business meeting in a sauna is actually a sign that the transaction is going well. By moving a business relationship into the sauna, the Fins show their clients or partners that they want to get to know them in a more informal environment.

In the U.S., business cards don’t get a lot of respect. People carry them and give them to others, but most of us are used to taking the cards in passing and sometimes even writing all over them. In Japan, there is strict etiquette involved in exchanging business cards, which are seen, not as disposable bits of paper, but extensions of the person to whom the card belongs. Exchanging cards functions as a formal introduction, and people behave accordingly. This website explains the process in detail, but some important points to know are:

In Spain, siesta is a break in the mid-afternoon — usually for about three hours. Although the siesta is becoming less common (especially in cities), many workers still have a schedule that involves working from the morning to the mid-afternoon, going home for a long lunch and a nap, and then returning to work for another few hours. People in Spain still work a 40-hour week, but this work is spread out across a longer expanse of time.

In South Korea, where, according to a 2014 survey, people drink, on average, more than Americans, Russians, and the British combined, drinking alcohol is a major part of social life and is central to many business relationships. Korean business people often feel that getting drunk with a partner or client is a way of building trust; the idea is that alcohol strips away any falsity and allows all of the people involved to get to know each other on a deeper level. These drinking sessions can be intense and, CNN notes, it can be difficult for foreign travelers to bow out of getting completely hammered without offending their hosts.

Being on time means something different in cultures all over the world. In countries like Japan, China, Switzerland, the U.K., and Germany, punctuality is highly prized. In places like Greece, Italy, Brazil, and Mexico, “on time” is a much more flexible idea. According to INSEAD professor Erin Meyer, the countries’ varying perceptions of punctuality are “partially affected by how fixed and reliable, versus dynamic and unpredictable, daily life is in a particular country.”