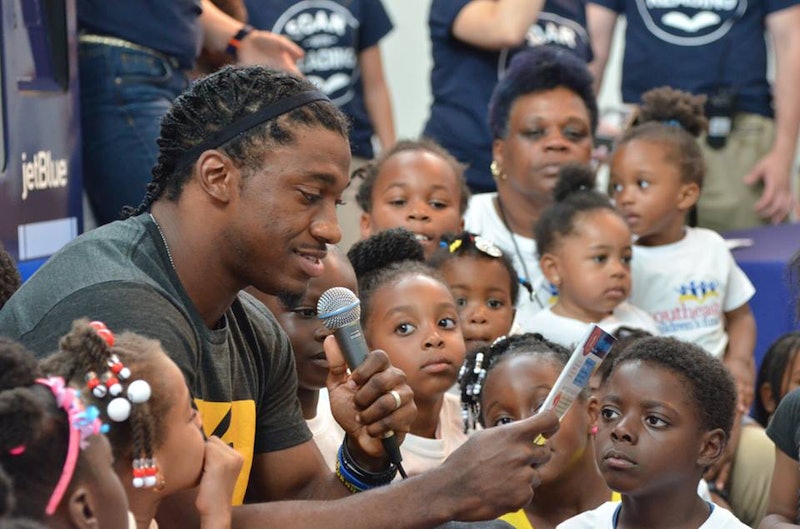 If you've ever wished there were a Redbox for books, you might have a fairy godmother watching out for you. JetBlue's book vending machines began servicing southeast Washington, D.C. on Wednesday. Children in the community can begin building their home libraries by picking up age-appropriate titles for free at any of JetBlue's three book vending machine locations. It's a pretty cool project.

Libraries are often the only place children — and adults — have access to books. However, public and school libraries across the U.S. vary widely in funding and service capacity. And although libraries are a universal good, studies show the benefits of an at-home library on children's academic performances. Regardless of a nation's political ideology and economic development, having books in the home increases its children's scholastic achievements.

Sadly, it was estimated that in 2010, 80 percent of U.S. families did not buy a single book. This can be contributed to a variety of factors, such as the high price of books. But the lack of reads in so many homes makes early literacy support even more important for at-risk kids, who often fall behind their peers in academic performance. We can't shame families that can't afford books for not filling their children's bookshelves, however; after all, books are expensive, and a parent is much more likely to spend money on feeding her children than entertaining them.

The book vending machines, a part of JetBlue's Soar With Reading Program, join other children's literacy initiatives — such as Dolly Parton's Imagination Library, the Ferst Foundation, and An Open Book Foundation — in their mission to get reading materials into the hands and homes of children and their families. The airline is expected to keep the machines stocked throughout the summer. However, because this is a pilot effort, the ultimate fate of the book vending machines remains uncertain.