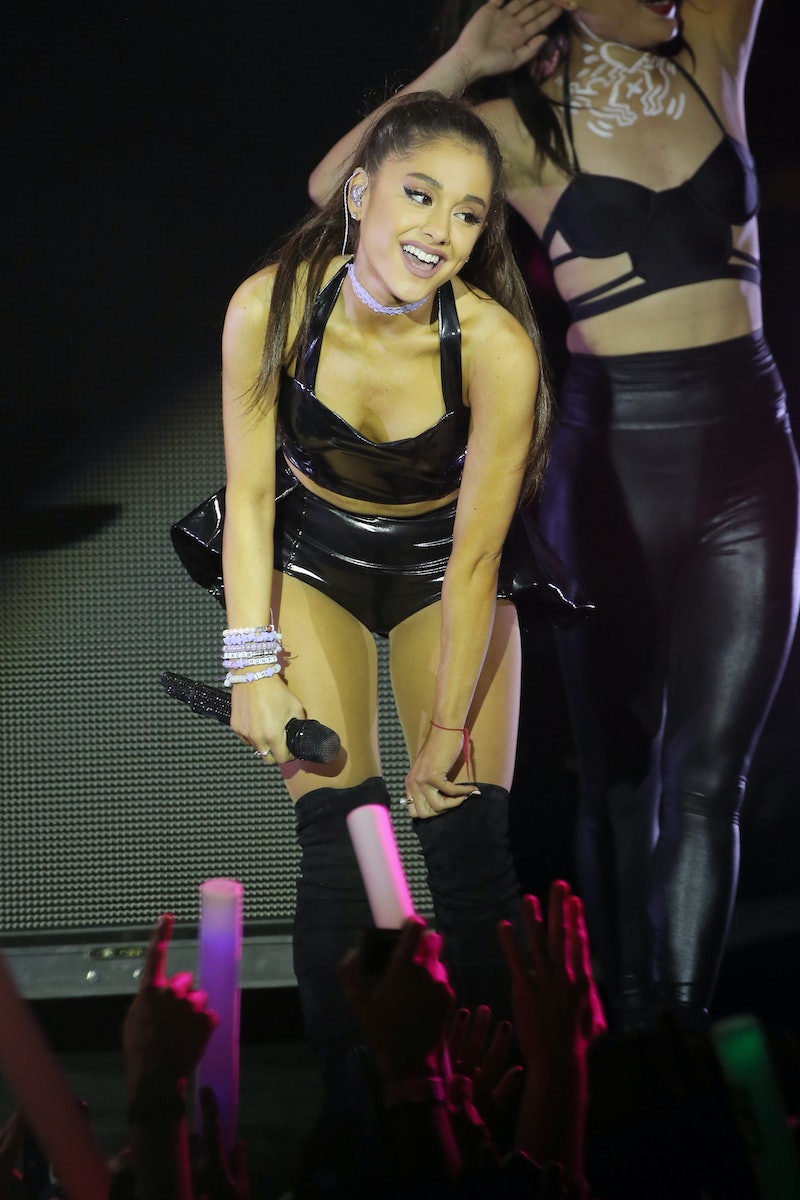 I'm not saying there's really ever a good time to walk into a doughnut shop with your new guy, make love to a bunch of doughnuts that you have no intention of buying, and then spew hatred for your fellow Americans, but if you're Ariana Grande and you get caught licking doughnuts, the best possible time to do so is when you're in between albums. Looking at Billboard numbers for the 22-year-old, her sales performance and number of downloads dropped since the July 4 pastry scandal, but that's kind of like saying she fell from the first step to the basement — she wasn't exactly ripping things up right before Doughnutgate.

If you haven't heard, Grande visited the shop with her backup dancer/maybe boyfriend Ricky Alvarez and, yes, placed her tongue on doughnuts that were sitting on top of a display case before celebrating her accomplishment with a smooch from her new guy. Grande released an statement apologizing on Wednesday in which, instead of apologized for licking the doughnuts, said sorry for saying she hates America and Americans, and then went on a rant about how she cares about child obesity as if that explained her actions. She also released a video apology on Friday that focused on how she's sorry for disappointing her fans and explaining that speaking about obesity and the food industry in the previous statement was off-topic.

Here's why there's a good chance none of this matters for her career: Grande's last album, My Everything , was released on August 25, 2014. It debuted at number one on the Billboard 200 — less than one year after her first album, Yours Truly, also debuted at number one. My Everything produced three insanely successful singles: "Problem" (with Iggy Azalea), "Break Free," featuring Zedd, and "Bang Bang" with Nicki Minaj and Jessie J, all of which made it to Billboard's Top 10. Nearly one year after its release, a song from the album, "One Last Time", is still charting in the Top 100.

Doughnuts aren't going to affect the wild success of My Everything and they likely won't affect Grande's upcoming new album, Moonlight, the release date of which has yet to be announced (and won't be, I'm sure, until the pop singer's PR team makes this all go away). Meanwhile, "One Last Time" has been falling steadily on the Billboard Hot 100, which determines a track's success based on three factors: radio airplay, sales data, and streaming data. During the week of June 13, it was number 46. Last week, it fell to 63. And this week? It's nowhere to be found on the chart. The last time Grande's single made it into the top 25 most-played songs on the radio was the week of June 6, according to USA Today. It's quite something to even have a year-old song chart at all, so it dropping off — albeit quickly — likely has less to do with Grande's controversy than it does with how long the song has been around.

To say this whole mess won't affect her image or sales is inaccurate, but in the grand scheme of things, it's probably no big deal. She still has tons of tour dates scheduled for this summer, which means myriad opportunities to apologize, play nice, and come up with a song or two about how much she has learned and matured since licking doughnuts. And, if she can get Taylor Swift or Kendrick Lamar to duet: cha-ching, problem solved.

More like this
Is Megan Fox Pregnant? MGK Gave A Shout-Out To Their “Unborn Child” Onstage
By Hugh McIntyre
Twitter Is Upset About The 'American Idol' Top 3 Results: "Who TF Is Voting?"
By Jake Viswanath
Stormi Just Walked A Red Carpet With Mommy Kylie Jenner & Daddy Travis Scott
By Hugh McIntyre
Lisa Marie Presley Reviewed Baz Luhrmann’s ‘Elvis’ Movie On Twitter
By Grace Wehniainen
Get Even More From Bustle — Sign Up For The Newsletter