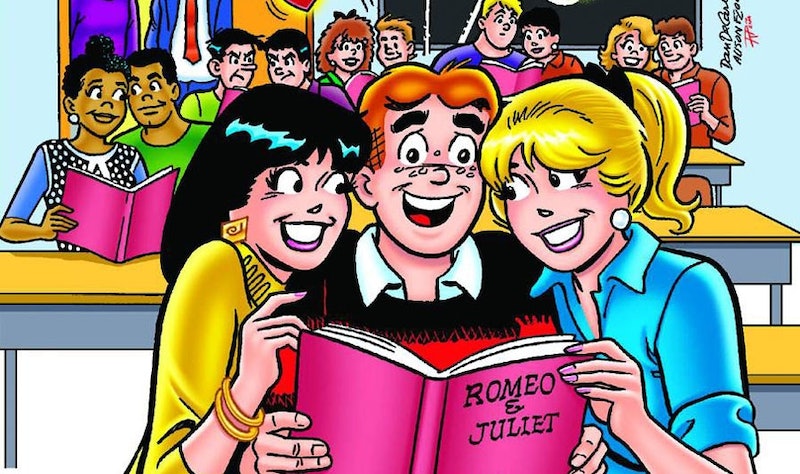 It's time for a whole new Betty and Veronica makeover, and I'm not talking about a wardrobe update (retro style is in, anyway). Comic book artist Fiona Staples and writer Mark Waid have created an Archie remake, and it looks as though both Betty and Veronica will be portrayed as three-dimensional characters with some long overdue agency. The comic celebrates Archie 's 75th anniversary by delving into Archie's origin story, according to Archie CEO Jon Goldwater. The blog Kotaku calls the revamp "a great start to a new vision," saying that "the character of Archie doesn’t feel like the center of the universe anymore," and that the comic "doesn’t gloss over the fact that being a teenager can be both fun and exhausting."

It's true that the early look of Archie was glossy and focused more on "fun" parts of being a teen. When I was in elementary school and skimming through dozens of Betty & Veronica Double Digests, I was convinced that high school would be exactly as it was portrayed in the comics: I'd wear brightly colored swimsuits and ride to the beach in a jalopy packed with all my best friends. Of course, since I grew up in a landlocked state, I was in for a rude awakening... but that didn't stop me from devouring stacks of Archie collected from various bookstores and yard sales. I had copies from the '70s through the 2000s, all featuring the all-American gang from Riverdale.

But despite the fact that Riverdale seemed frozen in time (for example, Archie perpetually hung out at a 1950s-style diner with milkshakes and cheeseburgers at 1950s prices), I noticed two changing variables in the early comics versus the later versions: Betty and Veronica. In the early comics, Betty Cooper is painted as the stereotypical Girl Next Door, and her defining characteristic is her undying devotion to titular hero Archie Andrews. Veronica Lodge, the rival for Archie's affections, is characterized by her wealth and good looks. And that's pretty much it.

Fast forward to the strips from the 1970s, and you'll see a much different Betty Cooper. Suddenly, she fixes cars, makes straight As in school, has defined career ambitions, and doesn't come running every time Archie calls. At least, most of the time she doesn't. Veronica Lodge is still rich and beautiful, but her friendship with Betty adds a new dimension to her character.

Still, most of Betty and Veronica's interactions still centered around Archie. Who would go to the big dance with Archie? Who would Archie hang out with on a trip to the beach? And, featured in a recent comic, who would Archie marry? When most people think of Betty and Veronica, they probably think of the love triangle the two have going with "America's boyfriend." As a young kid, I was always slightly disappointed by this. (And, anyway, I wanted Betty to forget Archie, become president, and eventually end up with Jughead.)

But now that this love triangle has been traded in for a more complex, realistic shape to the comics, it seems that the characters — especially the female characters — will finally be more than caricatures fighting over who will share a strawberry shake (and Archie's affections). For a remake that started with Staples being given just one direction (to make Archie "cute"), the comic sounds like it will give new dimension to everyone's favorite American teens.