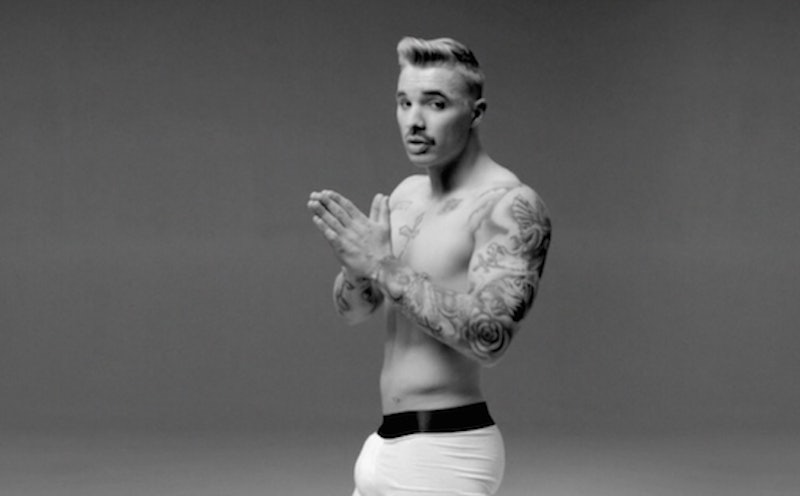 ATTENTION, EVERYONE: Your Friday just got better, and for the most awesome reason ever. Drake just dropped his music video for "Energy" — aka, his first music video in years — and, of course, it did not disappoint. Of course, as the most hardcore of Drake fans know, the former Degrassi star hasn't released a music video since 2013 — which means, yes, the music videos for "Started From the Bottom" and "Hold On, We're Going Home" were the last ones the "6 God" blessed us with. Thankfully, though, the wait is finally over, and it doesn't hurt that the video is pretty amazing. Whether you're into his parody vibe or are just super excited that Drake is finally back in your life, the video will definitely make an impression — as indicated by the sheer amount of reactions from Drake fans on Twitter.

In this epic video for "Energy," Drake takes on a slew of different characters and public figures, from Obama to Oprah to LeBron to Miley Cyrus to even Justin Bieber. We already knew that Drake was into parody and sketch comedy — he hosted Saturday Night Live once and did an awesome Urkel impression, after all — but this was on another level.

Fans are already discussing the meaning of this method on Twitter: why is he parodying these people in particular? Are these pop culture and political staples the "enemies" Drake is talking about when he raps in the song, "I got enemies/ Got a lot of enemies?" How long did that makeup take? Is that his real body as the Biebs?

1. This Philosopher Looking For "Meaning"

Find the message within.

2. The Girl Who Was Unprepared

Will the real Drake please stand up?

How very Canadian of you?

5. The Guy Who Doesn't "Get" Impressions

He only had to pay himself, man.

Sweet dreams are made of these...

He got enemies, got a lot of enemies.

8. The Guy Who Was Moved By The Lyrics

Does the craziness of the video really trivialize the intensity of the lyrics?

This video is gonna be hard for SNL to parody since it's... well, already a parody.

"Mom, this is what I want for Christmas."

Me too, Rachael. Me too.

There's still hope he can appear in the Minions movie.

It's definitely the most GIF-able, Meme-able one in awhile.

You just gotta sit and ponder it for awhile.

Tell us how you really feel.

That has to be what Drizzy's going for, eh?

This is the video that everybody's talking about, and that many will likely get in debates about with friends about over the weekend. It's a comfort to know that, with SNL off for the summer, we all have some parodies by Drake to either laugh with... or laugh at.