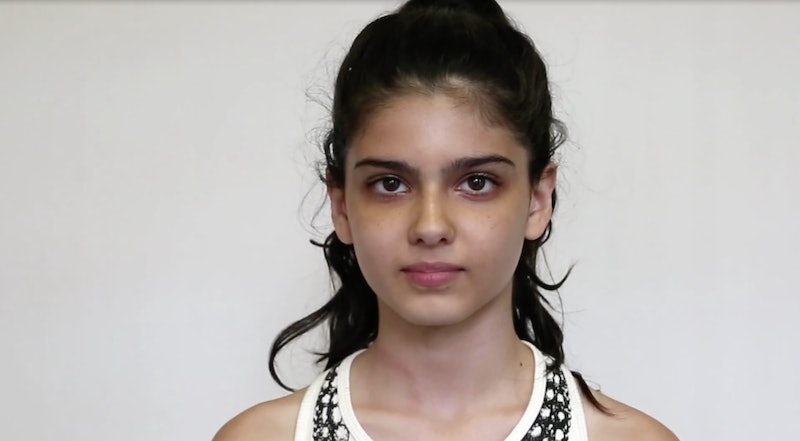 Being 12 years old is a rough time in many lives: You're in middle school, you're probably just about to start puberty, and you're generally starting to become distrustful of people who once ran your lives fully, like parents. But being a 12-year-old person of color and confused about or taunted for your racial identity and culture adds an extra layer of difficulty, as we see in this video of 12-year-olds talking about race for WNYC in New York City.

Titled "'Because I'm Latino, I Can't Have Money?' Kids on Race," the video is part of WNYC's web series Being 12, which features real kids talking about the good, the bad, and the ugly of... well, being 12. This latest addition to the series, however, tackles a topic we definitely need to bring into the fore: Race and racial identities in relation to growing up. I don't know about you, but when I was 12, I certainly felt like I was going through a lot: Suddenly middle school was upon me; I was getting sick of my mom buying me clothes but didn't know how to politely tell her; puberty was starting to kick in (aka my teacher gave me deodorant and told me to please start using it after recess); and I, like many of the children in "Kids on Race," was navigating the complicated situation of being one of the few brown girls in my school and neighborhood. Whereas literally everyone else in my Seattle neighborhood of Richmond Beach lived in a big property on the beach, I lived in a small apartment instead with an immigrant family. A lot of these kids share very similar stories about feeling like outsiders in a community where they were often just a minority.

"Kids on Race" starts out with some of the kids talking about their races. A boy describes himself as Dominican, Puerto Rican, and Black, while a girl talks about being Venezuelan and getting laughed at for sharing one of her traditional foods with her friends.

Another girl goes onto describe her experience at a restaurant, where the waitstaff made her family pay in advance; because of their skin color, they thought the family would steal. A boy also talks about how scared he is to get stopped by the cops just for walking down the street.

This boy below, who states that he has an African-American father and an Irish-American mother, says, "I think there's this anxiety that comes with being biracial that eats away at you, almost like you have to prove yourself, that you're one or the other. I hear the phrase 'you're not black' all the time."

The video breaks free of the personal anecdote theme for a second and cuts to a white-presenting girl who does an extremely poignant job of describing white privilege. "I think white privilege is the idea that in your everyday life, you're getting treated differently and sometimes with more respect — or people just trust you more, or they have certain expectations of you, like that you might be smarter or you might be wealthier becayse you're white," she says. "It makes me feel guilty sometimes, even though it's not my fault, I feel guilty for having a privilege I don't deserve."

The four-minute long video shares plenty more anecdotes and stories from children who have been affected in some way or another by their racial or cultural background. Not only does it show us the nuanced ways in which 12-year-olds think, feel, and process the world around them, but it also gives us insight into how complicated and heartbreaking their interactions with race can be — and how much of a lasting impact racism and inequality can have.

Check it out, but make sure you've got a fresh box of tissues on hand.