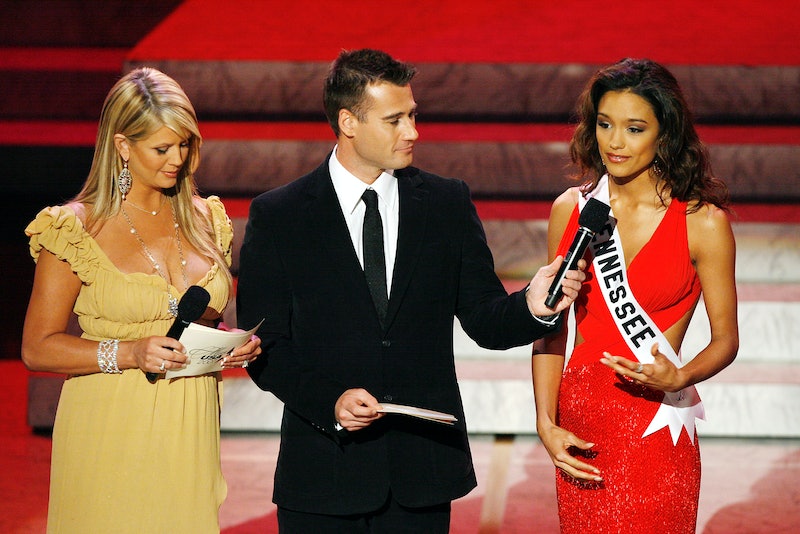 The Miss USA pageant is quickly approaching, and it will go on as planned this Sunday despite the recent controversy surrounding Miss USA owner Donald Trump. The pageant will include a swimsuit, evening gown, and interview portion, and will air on Reelz Channel, a cable network that picked up the program after NBC and Univision dropped it. Of course, the highlight will be the interview section, because the past few years have brought contestants some of the worst beauty pageant interview questions so far.

The idea of the interview portion of the Miss USA competition is noble. It gives the women the opportunity to speak about their passions and (attempts) to prove that Miss USA is about more than looks. There's no doubt that accomplished women compete in the pageant, and they all dedicate months to preparing for it. Once they finally get to the penultimate interview, though, they're usually asked questions that range from inane to insanely difficult.

Contestants answer questions about topics ranging from current events to women's issues. Ever since Caitlin Upton's viral gaffe at the Miss Teen USA pageant in 2007, judges have increased the difficulty of their questions, maybe in an effort to recreate the famous video. This year's questions will surely involve controversial topics, so in preparation for Sunday's contest, here's four of the most awkward interview situations contestants have already been in.

1. To choose between looks and smarts

At the 2001 Miss Philippines contest, Jeanie Anderson was asked to decide if she would rather have beauty or brainpower. Admittedly, it's been 15 years since this question was asked, and the world of pageant interview questions has slightly improved. But at the same time, it's an awkward question to ask at a beauty pageant of all places. As Ranker points out, this is made more ironic by the fact that Anderson (and all the contestants) had to wear bikinis while they answered their questions.

2. To answer the same question as other contestants...while they're all on stage together

At the 2015 Miss Universe pageant, the Top 5 contestants all answered the same question, which was pretty straightforward: What is the greatest contribution of your country to the entire world? The awkward part about it was that the contestants were all on stage, so they had to put on noise-blocking headphones unless they were answering. The logistics of this meant lots of awkward silences and made the interview section even more uncomfortable than usual.

3. To solve the ISIS problem in 20 seconds or less

Last year, Miss Virginia Courtney Garrett was asked how the country should respond to brutal ISIS beheadings of two journalists. The Miss America contestant remained surprisingly calm, given the serious nature of the question. Quizzing contestants on current events is usually a good idea, especially given that they're interacting with the public every day. However, setting a 20-second time limit is virtually setting them up for failure. Garrett's answer, which stressed that ISIS is a global problem and must be solved through cooperation, barely fit into the time limit. John Oliver poked fun of the 20-second limit (and beauty pageants in general) in a hilarious spoof pageant interview.

4. To be prepared to answer questions about Syria or twerking at the drop of a hat

Movies and television constantly spoof beauty pageants and the softball questions judges sometimes throw at contests. (The classic Miss Congeniality "Please describe your idea of a perfect date," comes to mind.) As the questions become more serious, contestants have no idea what to expect. A perfect example is the 2014 Miss America contest, where Miss California and Miss Oklahoma were asked vastly different questions. The first, for Miss California, was "The U.S. has threatened to attack Syria over using chemical weapons on its own people. It's a terrible crime, but is it our responsibility to punish them for it?" Later, Miss Oklahoma was asked "Miley Cyrus has caused a media sensation with her 'twerking' performance on the VMAs, appearing nude in her new video, and so on...What do you think? Is it just Miley expressing herself artistically, or Miley please what are you thinking?" Expecting some contestants to answer serious questions and others about pop culture is more than slightly unfair.

The Miss USA pageant will surely bring a new round of cringeworthy questions, but hopefully judges won't repeat these mistakes.

More like this
10 Swoon-Worthy Beauty Looks From The 2022 Cannes Red Carpet
By Olivia Rose Ferreiro
I Tried Marilyn Monroe's Makeup Tricks, & They're Pretty Genius
By Olivia Rose Ferreiro
10 Nail Trends That Perfectly Capture The Early 2000s
By Paris Giles
What To Know About Brow Microshading Vs. Microblading
By Danielle Sinay
Get Even More From Bustle — Sign Up For The Newsletter