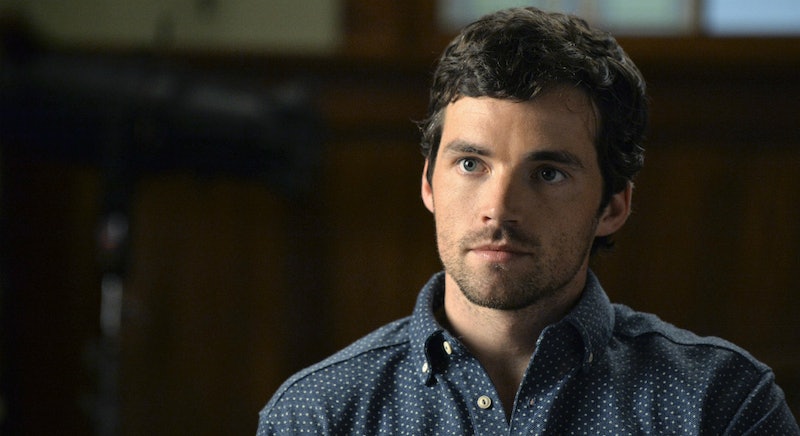 I'll be honest with you, Pretty Little Liars fans: I still don't trust Ezra. If I'm being completely honest, I never did, which is pretty much how everyone should feel about a high school teacher who is completely OK with dating one of his students. Of course, while I may not trust Ezra, Pretty Little Liars certainly wants me to. Fitz has always been the white knight of this series, whether it's raising a son that isn't biologically his child, saving Aria from psychotic high schoolers with guns (RIP, Shana) or helping the girls track down Big A once and for all. Sure, Ezra may have been knocked down a few pegs after the whole "I was writing a book about Alison" thing, but ultimately he's still firmly in the "good guy" camp. But does that mean that Ezra isn't Charles DiLarentis? I'm not so sure.

There are actually a surprising number of reasons why Ezra could still be in the running for captain of the A team. Let's assume that Charles faked his death, as showrunner I. Marlene King seemed to suggest on Twitter recently by declaring that Charles is the mysterious A. There aren't that many guys on the series that are the right age to secretly be Charles, but Ezra definitely fits the bill at 25. For even more Charles theories, check out Bustle's Pretty Little Liars podcast.

It's also not completely impossible for Ezra to have gotten away with taking on an entirely different persona. For all we know, Ezra could have been adopted by the Fitzgerald family at some point in his youth, so when "Charles" faked his own death in Radley, he could easily live under the Ezra Fitzgerald name. (Let's not forget that Ezra himself goes by a different name than his parents — he's Ezra Fitz.) Ezra didn't grow up in Rosewood, so it's not like anyone would really be able to recognize him — he could have started a whole new life and no one would be the wiser.

Then there's the fact that Ezra has plenty of resources, which A needs in order to live out his evil fantasies. Ezra has plenty of family money, lots of hiding places (remember that cabin?), and already has the trust of the Liars — he has everything he needs to be a good stalker. We saw Ezra conducting research for his book on Ali, which basically looked like very organized stalking. What if Ezra was actually writing a book, but was also torturing the girls in order to get a better story? Ezra could have attempted to write himself into the story of the girl he was obsessed with in order to get close to her.

Then there's the final clue: the fact that A called himself Varjack, aka Paul Varjak from Breakfast At Tiffany's. We know that Ezra called Alison his "Holly Golightly" when they first met, and that Ali had created a fake passport with "Holly Varjak" — could it be a clue that Ezra isn't as innocent as he appears? Of course another prime Charles suspect is Wren, as described in the video below.

But if Ezra is A, he's doing a lot to make sure that no one finds out by helping "rescue" the girls from the dollhouse and generally acting as a concerned citizen of Rosewood. I may not trust Ezra, but my jaw will officially hit the ground if he's revealed as being the ultimate big bad — he'll have officially played us all.