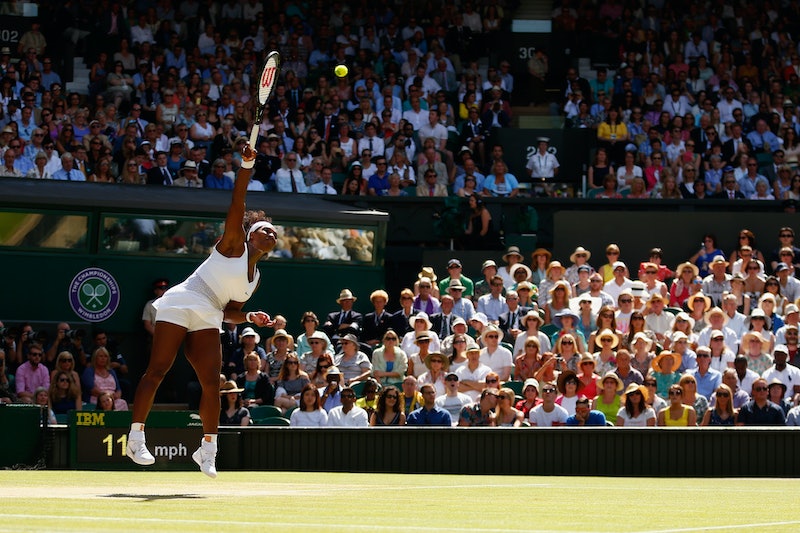 The Wimbledon women's singles final came down to a stunning match-up between Serena Williams and Garbiñe Muguruza, a 21-year-old Spanish star who was determined to stop Williams from winning her 21st Grand Slam title. Williams, however, was unstoppable, defeating Muguruza 6-4, 6-4 in a slow-starting yet dominant performance. Williams' historic win on Saturday marks the player's second "Serena Slam," as she now holds all four major titles in tennis — Wimbledon and the French, Australian and U.S. Opens.

With the match coming just a day after the U.S. women's national soccer team marched in their celebratory World Cup parade, many sports fans on Saturday couldn't stop talking about how this week has been a wild ride in U.S. women's sports. Of course, that also means many fans couldn't ignore the obvious sexism and double standards, including the persistent pay inequality between male and female athletes.

The two-year-old documentary seems to be making the rounds ahead of Saturday's final, largely due to the controversy that emerged following the U.S. women's national soccer team clinching its third Wold Cup title. As Bustle previously reported, professional women soccer players only earn a measly salary between $6,000 and $30,000, while the professional men players earn a minimum of $50,000. With this in mind tennis fans continued to highlight on Saturday the sexism found in women's sports, ranging from unequal pay to media critiques of their physical features and veiled criticisms of women's tennis being "weaker" than the men's field.

Many fans provided some commentary celebrating women in sports (and politics)...

But of course, Serena Williams' historic Wimbledon win brought out its own kind of sexism on Saturday, with commenters noting that female tennis players don't deserve equal pay or worldwide recognition, because of the limitations of their sport compared to the men's tournament...