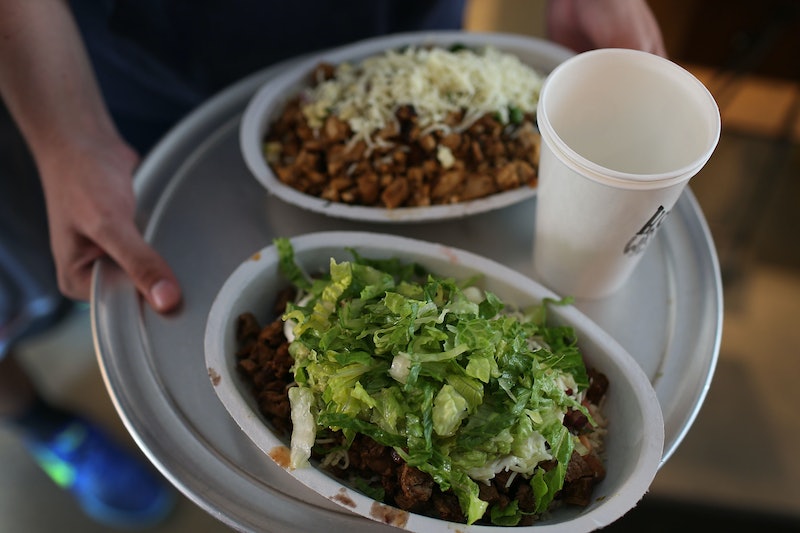 If you've noticed your beloved Chipotle burrito has gone up in price and wondered what the deal is, it's not just because of the dreaded avocado shortage or the infamous steak and carnitas spike of 2K15, but actually for a much happier reason. Chipotle is increasing prices in order to pay minimum wage workers more, and if that's the case I can accept paying little bit more for my newborn baby-sized burrito, since it's for a good cause.

William Blair, an investment banking and wealth management firm, started noticing that in cities where the minimum wage had recently increased, so did Chipotle's prices. In particular, in San Francisco, where the minimum wage went up by 14 percent, the price of a Chipotle steak burrito increased about the same rate. But unlike the increased price to offset the cost of beef, the San Francisco price jumps apply across the menu, not just to certain meats. Compared to other cities, Chipotle's price hike was a lot less steep (averaging about .5 percent), leading them to conclude that the high price increase in San Francisco was tied directly to the increase in minimum wage. This assumption is at least partially correct—Chipotle told The Chicago Tribune that the minimum wage increase does play a role in the price hike, saying it was "done in part to offset higher labor costs" (other reasons include high operating costs in San Francisco).

While some are not impressed that Chipotle can't simply absorb the higher labor cost themselves without having to pass that onto consumers, things may not be as bad as they seem. First of all, you'd only be paying about a dollar more than you're used to paying, which is really not all that bad considering guacamole costs more than that. I would rather use my dollar and change to help people earn a living than to help myself get my avocado fix. But let's be real, I'm going to get guac anyway, because I'm a big spender like that.

All of this could mean that Chipotle might also up its prices in places like Seattle, Los Angeles, and Chicago, where minimum wage has recently gone up. But let's be real, would that stop any of us from going to Chipotle? Would anything, for that matter?

More like this
5 Crystals To Manifest More Money
By Megan McCarty
Meet The Spice Company Founder Who Sees Chai As A Metaphor
By Madhuri Sathish-Van Atta
If Your Refrigerator Is A Mess, These 25 Organizing Products Can Help
By Courtney Young
Here’s What Sarah Jessica Parker’s Canned Cosmo *Actually* Tastes Like
By Emma Garza
Get Even More From Bustle — Sign Up For The Newsletter