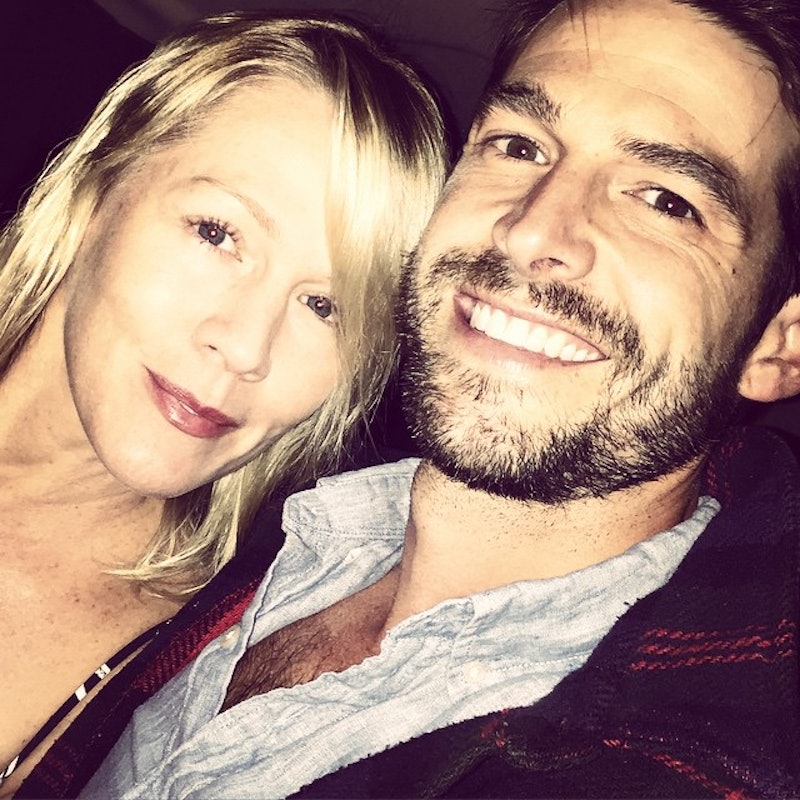 I have to admit, I'm a sucker for a good celebrity wedding. I'm also a sucker for old episodes of Beverly Hills, 90210. I mean, that's not all I love, but those two things hold a particularly special place in my heart, so you can imagine how excited I was to hear that Jennie Garth and boyfriend David Abrams got married in Los Angeles on Saturday, July 11. Garth, an actress whose most legendary role ever was obviously as 90210's Kelly Taylor back in the '90s, tied the knot with Abrams in an "intimate ceremony" (the best kind) in front of their loved ones, according to People, and their obvious love for one another is really adorable.

As the couple told People in an exclusive statement, "It was the perfect night," adding that they were "so happy to have [their] family and friends surrounding [them] on this special occasion!" That special occasion included a wedding party made up of Garth's three daughters — 17-year-old Luca, 12-year-old Lola, and 8-year-old Fiona — from her first marriage to Peter Facinelli, which ended in 2012. And while there are no photos or specific details from the ceremony just yet, I think we can safely assume it was really beautiful and there probably wasn't a dry eye in the room.

Garth and Abrams met on a blind date only last fall, but they immediately became inseparable and fell so in love that Abrams popped the question and the couple got engaged in March 2015. They seemed to be perfectly suited from the beginning, but then again, I'm a sucker for love and their whirlwind romance (which has been documented heavily on both of their social media channels) has been really adorable to watch as it's progressed. Garth herself has said that she feels that Abrams completes her, and that's a wonderful feeling for anyone to have. It's clearly a feeling that Abrams mirrors:

Congratulations to the clearly elated couple, and here's to many more years of happiness. Hollywood isn't an easy place for relationships, but I don't know, you guys — somehow, I just have faith that things are going to work out for these two in the long run. Call it a hunch, but I've got high hopes.