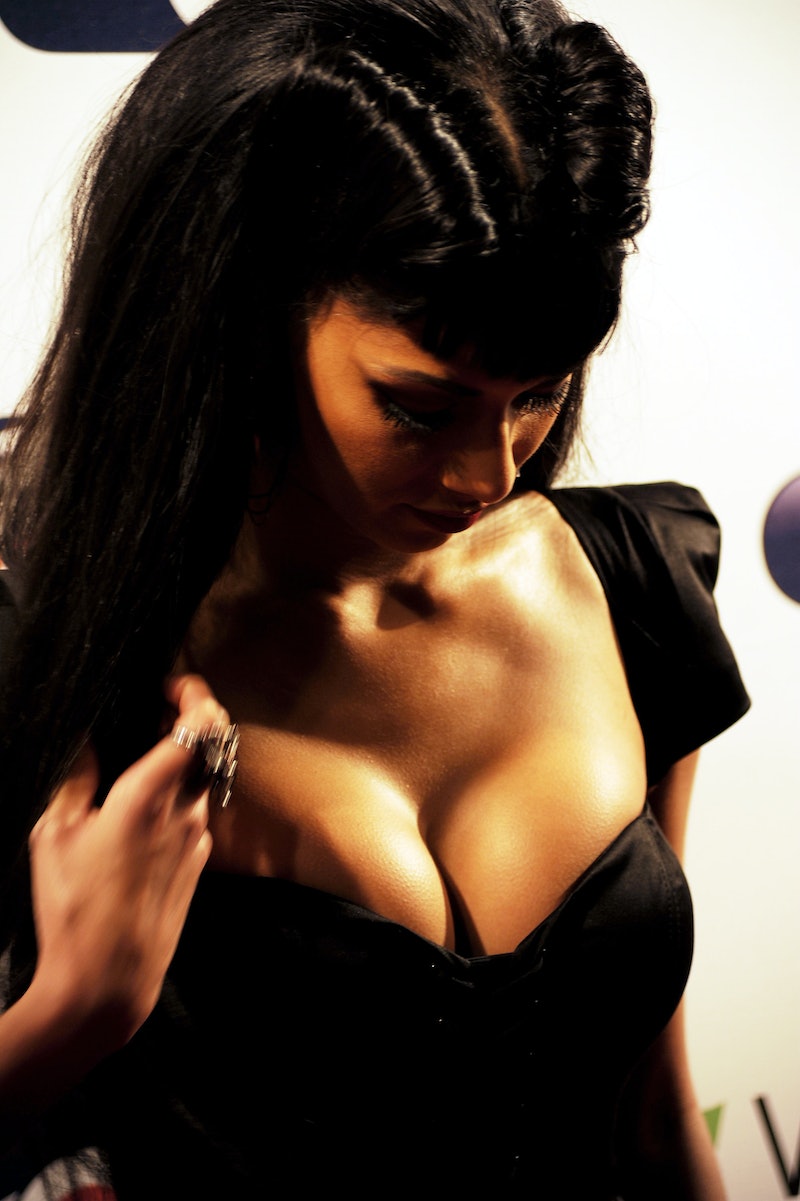 As long as I've had breasts, they've been a touch uneven. I mean, their asymmetry has never been inconveniently severe. I don't have to buy special bras or anything, and unless you were to see me topless, you'd probably never notice any size or shape discrepancies between my boobs at all.

I haven't lost any sleep over the fact that my boobs grew asymmetrical instead of turning out nice and even, but I have been curious about what caused them to grow into slightly different shapes and sizes in the first place. Actually, I've wondered about it a lot lately, because it seems like every woman I know deals with at least a little breast asymmetry.

In fact, breast asymmetry is so common that even popular celebrities like Jennifer Lawrence and Keira Knightley have opened up about their own uneven boobs. Knightley actually went beyond just talking about uneven breasts when she posed for some topless, unretouched photos. (A decision that made me love her even more, by the way.) But while I've pretty much always known uneven boobs are common, I'd never taken the time to find out why they're common — until now. Here's what I found out:

What's Going On In There In The First Place?

Before we can get into why breasts are often uneven, we need to talk briefly about breast anatomy. As you may already know, your breasts are actually glands (mammary glands) contained within your chest wall. But what you may not know is that there's actually quite a lot going on inside your boobs. Each individual breast weighs an average of seven to ten ounces, and is made up of about 12-20 lobes that branch out from the nipple like spokes in a bicycle tire (I know, I know, you'll never look at a bike in the same way). These lobes all have one central duct, which opens up at the nipple, where milk is able to exit during breastfeeding.

So, Why Would Breasts Be Uneven?

Now that we've got a basic understanding of breast anatomy and the general, breast size variations that no woman is immune to, let's talk about what causes breasts to grow unevenly.

Most of our body parts aren't fully symmetrical, and it's really nothing to worry about. Usually, women's eyebrows aren't even the same size and shape. Although it isn't noticeable, one of my legs is actually shorter than the other. So unless your breasts grew uneven post-puberty, your uneven breasts are most likely just due to normal growth variations.

Hormone changes during puberty can cause one breast to start growing before the other, even if they stop growing at the same time, causing uneven breasts. Although this may seem odd, and it's definitely annoying, it's really nothing to worry about.

A breast lump is a growth of tissue that develops within your breast. While breast lumps can be cancerous, most are simply caused by a variety of benign (non-cancerous) conditions and/or traumatic injuries to the breast. Sometimes, breast lumps are actually cysts, (fluid-filled sacs). These are generally noncancerous, and while they can be found in women of all ages, they mainly affect women ages 35-50, and normally disappear after menopause.

Breast lumps can also be caused by fibrocystic breasts, a condition that causes a woman's breasts to feel lumpy or rope-like, which is actually quite common (more than half of all women experience fibrocystic breasts in their lives) and isn't innately dangerous. However, any persisting and/or worsening breast pain should definitely be checked out by your doctor.

Lastly, fibroadenoma can cause breast lumps in adolescent girls and women under the age of 30. Fibroadenomas are non-cancerous breast tumors which can vary in size and shape — often growing larger or smaller on their own — and they can be surgically removed by a breast surgeon should they fail to shrink over time.

I know this last potential explanation for uneven breasts is terrifying, but don't freak out too hard over it. Generally, breast cancer is only a concern with asymmetrical breasts if you've always had even breasts, but notice they've started to become uneven in your adulthood. So if your boobs have always been a bit lopsided like mine, it's not likely that your asymmetry is due to breast cancer. However, if you were graced with twin boobs, but recently you've noticed them growing more and more asymmetrical, it would be worth your time to make an appointment with your gynecologist about it. Because sudden changes in the size, shape, and appearance of your breast well into womanhood could be a symptom of breast cancer.

Clearly, uneven breasts are super common. Celebrities have them, small-breasted chicks like myself have them, and more than half of all women have them. So unless your breast asymmetry is a new thing, it's really nothing to stress over.

However, it is worth noting that if you are constantly self-conscious about your uneven breasts to that point that it affects your overall mood and well-being, you could be suffering from the harmful psychological affects that have been associated with breast asymmetry. If this sounds like you, consider talking to a counselor about it. Talking out your issues is always cathartic, and sitting down with a counselor can also help you decide whether breast augmentation would be right for you. Because when it comes to breast asymmetry, all that really matters is that you and your boobs stay happy and healthy.