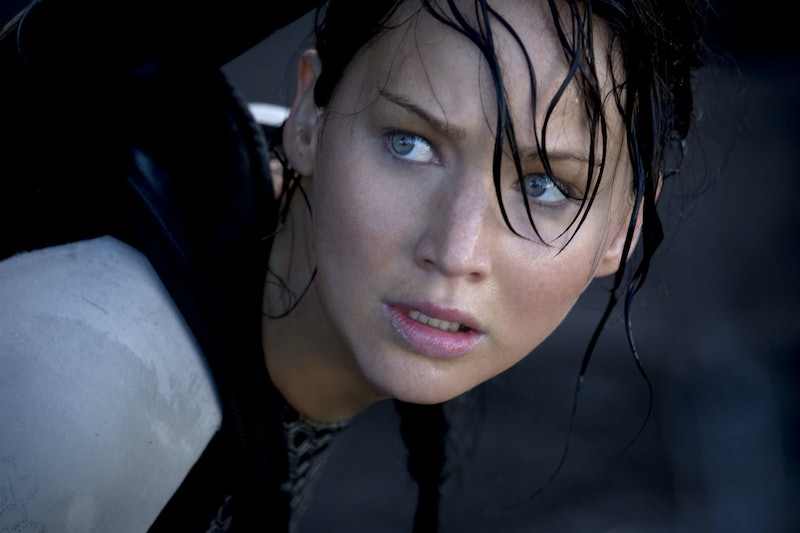 In many ways, The Hunger Games: Catching Fire feels like a flag waving for gender equality in the film industry. The highest grossing November release of all time gives us hope for future films centering on female characters, especially those like Katniss Everdeen (Jennifer Lawrence) who defy the gender stereotypes in both personality and, as Linda Holmes at NPR pointed out, relationship dynamics in film. Unfortunately, while Katniss' ability to capture a nation (the world, really) is incredibly inspiring, it doesn't fix the still glaring gender inequality found in the industry when it comes to actors, filmmakers, and other professions. As it stands now, women still come in last place.

It's hard to ignore the disparity. In fact, the New York Film Academy recently put together an infographic that depicts just how great the gap still is. While we have a few good characters and great directors like Sofia Coppola and Kathryn Bigelow on which to place our hopes and our notions of progress, Coppola and Bigelow represent half of the only four total women nominated for Best Director in the history of the Academy Awards. Of behind the scenes film roles, producers see the numbers closest to gender equality: 25 percent are women and 75 percent are men. That is actually the best we've got.

But it's not just the women behind the camera who are outnumbered. Despite the fact that half of the movie-going population are women, only 30.8 percent of speaking roles on film are female characters, according to NYFA. And when you consider the money female actresses earn to appear in the mere 30.8 percent of speaking roles, the numbers are staggering as well. The highest paid actress in the business, Angelina Jolie, makes less than half of what top actor Robert Downey, Jr. commands per film. In fact, the chart has so much wage disparity between genders that it looks more like a middle school dance than a depiction of Hollywood wages.

While it may seem that all is lost and that the film industry is doomed to be male-dominated forever (stats like the fact that teenage women depicted with some nudity has increased by over 30 percent from 2007 to 2012 certainly don't help), there is a silver lining in these findings: Female characters increase in number on screen when a female director or a female screenwriter is involved. That wasn't so for The Hunger Games: Catching Fire (the screenwriters and director are both male), but the original novel was written by a woman, Suzanne Collins.

So though looking at these findings compiled all in one place may be enough to make us shrivel up and hide from an industry that seems determined to marginalize women, the news is not all bad. People like Lena Dunham aren't praised because they make Brooklyn look really cool or because they withstand getting made fun of at award shows like champs — Dunham is important because she's a 26-year-old woman making incredible, championable strides in film and television by writing and directing her own material. It's encouraging that a character like Katniss is beloved. It's encouraging that people are still outraged that Bigelow wasn't nominated for Best Director for Zero Dark Thirty.

We've identified the problem, which we all know is the first step. Now it's time to use the rage directed at these stats and put it to good use. We are working against years of an industry run almost entirely on the merits of men, but you could say that about any industry. That doesn't mean it has to stay that way forever.

To see the full rundown of stats, visit NYFA.com. Click on the infographic below to see a graphic representation of NYFA's stats.

More like this
Sandra Bullock, Girlboss Extraordinaire
By Matt Harkins & Viviana Olen
Harry Styles Called For "Backlash" In Powerful Statement On Abortion Rights
By El Hunt
Twitter Was Saying The Same Thing About Sam Ryder’s Surprising Eurovision Result
By El Hunt
Laura Dern Said “Cultural Awareness” Made Her Rethink This 'Jurassic Park' Fact
By Grace Wehniainen
Get Even More From Bustle — Sign Up For The Newsletter