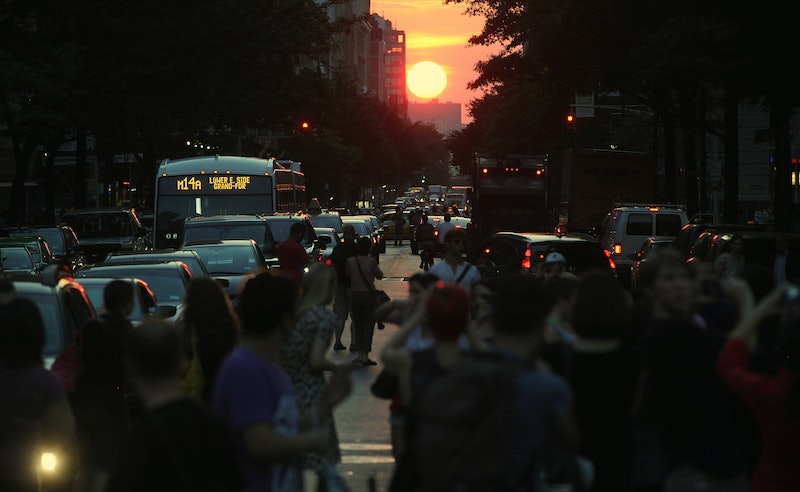 New York City is about to get even more gorgeous come sunset on Sunday and Monday. The city's grid system is perfectly aligned for a biannual event in which the sun sets dead center of the borough's cross streets. The sunset on Sunday, July 12 marks the full effect, meaning the entire sun can be seen between the many buildings that line north and the south of Manhattan. Monday, July 13's sunset shows just half of the sun along the cross streets. So, what is the Manhattanhenge phenomenon? Manhattanhenge is a term originally coined by Hayden Planetarium Director and astrophysicist Neil deGrasse Tyson in 2001, who took umbrage with The New York Times' term, Manhattan Solstice.

Tyson draws the name from a similar effect at Stonehenge, a prehistoric English monument, in which the sun aligns between the historic circle of stones every solstice, signifying the changing of the seasons. For decades, scientists have been looking for answers as to why Stonehenge was built in the first place. Tyson jokes that, just as modern scientists hypothesize that Stonehenge was of religious significance, so too the future of the human race may feel the same way about Manhattanhenge. Says Tyson:

These two days happen to correspond with Memorial Day and Baseball's All Star break. Future anthropologists might conclude that, via the Sun, the people who called themselves Americans worshiped War and Baseball.

The first Manhattanhenge of the year fittingly occurred at the end of May and saw an outpouring of people snapping photos along the streets of the city. Because it's not an eclipse, but rather a sunset, no special photography equipment is needed to capture Manhattanhenge. A viewing spot heading east in New York City is key, according to Tyson. He cites 14th, 23rd, 34th, 42nd, and 57th Streets as particularly prime viewing spots, most notably 34th and 42nd Streets, which showcase the Empire State Building and the Chrysler building. Metro New York also suggests viewing Manhattanhenge from slightly above on the Tudor City Bridge for a change of perspective.

Just before the sun sets on Monday, astrophysicist Jackie Flaherty will be giving a talk at the Hayden Planetarium, detailing the science and history of Manhattanhenge. Already, photos are popping up on social media of the streets of Manhattan bathed in golden light from the perfectly setting sun as New Yorkers eagerly anticipate Sunday and Monday's sunset. It certainly is a sight to behold.

More like this
13 Summer Solstice Quotes To Celebrate The Longest Day Of The Year
By Sadie Trombetta
The 15 Best Dresses For Hot Weather
By Andrea Gale Boerem
The Summer Solstice Spiritual Meaning, Explained
By Jessica Booth and Brittany Beringer
The 7 Best Waterproof Sprays For Shoes
By Marshall Bright
Get Even More From Bustle — Sign Up For The Newsletter