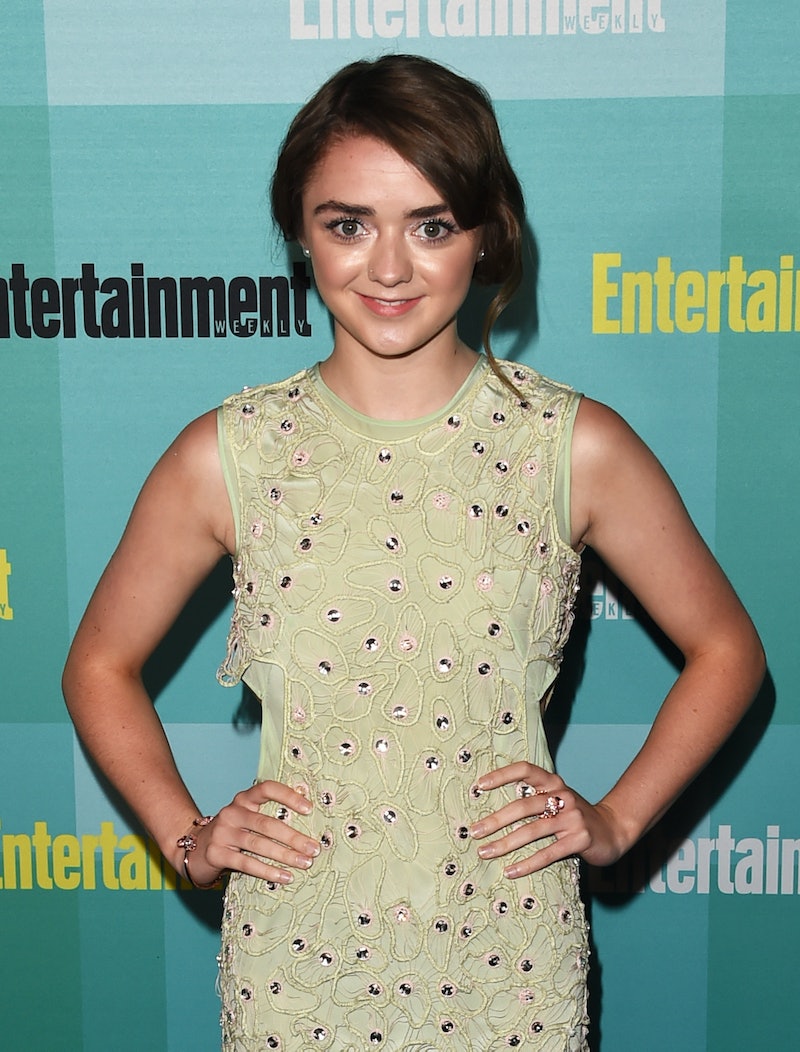 Removing her goggles in one swift move to expose her face to a baffled Doctor, Game of Thrones' Maisie Williams made her big Doctor Who debut in the Season 9 trailer. "What took you so long, old man?" she teases the Doctor to which he can only reply, "You." The tantalizing introduction has sparked a number of theories all centering around the idea that Williams is playing a character viewers have met before, and it seems like a safe bet. I wouldn't put it past head writer Steven Moffat to throw everyone off the trail by having Williams appear as an entirely new character, though. For now, however, I am going to work under the assumption that Williams is playing a familiar face, even if it's one that only looks familiar to The Doctor right now.

Besides her epic entrance, there are only two things known about Williams' appearance at this point. The first is that she is slated to appear in a two-part Season 9 outing called "The Girl Who Died"/"The Woman Who Lived." The second thing is that, per a statement from Moffat to the BBC, she is going to give the Doctor "exactly the right kind of hell." That's not much to go on, but I have never let anything like a shortage of information stop me from speculating before. Here are a few characters I think Williams could be channeling in the trailer:

I know, I know, River is supposed to be gone for good now, but bending space and time allows for all sorts of magical things to happen. While she was said to have given the rest of her regenerations to the Doctor, perhaps, she found a way out of The Library and was bestowed a few extras. It's happened before. The reason I think Williams could be River is based entirely on a feeling. Her entrance is so River-esque, it's impossible for my mind not to go there.

The most important woman in the whole universe had her memories taken away in order to keep her from dying, but what if despite the Doctor wiping her memory of her time with him, Donna still retained some Time Lord abilities? It's a long shot, and it would undo one of the series' most powerful emotional beats, but the idea of Donna regenerating and traveling around having adventures thrills me to no end. Plus, calling the Doctor "old man" is a very Donna move.

The Doctor's daughter has been missing in action for way too long. I have no evidence to support this theory, but it would be awesome to see Jenny again in any form. This Doctor and potential version of Jenny would be well-suited to playing father/daughter moments as well.

The Woman is a powerful Time Lady who appeared several times throughout the latter part of Ten's run. It has been widely theorized that she is the Doctor's mother. While she was often seen crying or covering her face in previous appearances, it would be interesting to see the Doctor encounter a young version of this mysterious woman — and it would fit with the title.

Versions of Clara were scattered across time and space. It stands to reason that there could be one The Doctor has not yet met. Further backing up the idea of Williams as a young Clara is how remarkably similar she looks to Jenna Coleman, and the hairstyle. Victorian-era Clara was sporting a very similar up-do. Alternate versions of Clara are always dying, and maybe this girl must die so the "Impossible Girl" can finally be considered a woman in her own right.

Den of Geek confirmed Williams' double-header is a period piece that will also feature a character named Odin. Now if it's the Odin, then Williams could totally be the trickster Loki. How epic would that be?

Finally, there's Missy. The Master reappeared as a woman in Season 8, so The Doctor could meet an earlier regeneration of her in the form of Williams. Missy is already set to return this season, so it's not so far-fetched to think multiple versions of the character may appear. Seeing Williams as a villain would also be a treat.

Or she could be someone completely new. Whoever Williams is playing, she is sure to give the Doctor the adventure of a lifetime. Check out Williams in action in the Season 8 trailer below.

More like this
Ryan Gosling Is Officially Ncuti Gatwa's Biggest Fan
By Maxine Harrison
Emilia Clarke Shares More Details About The New 'Game Of Thrones' Series
By Maxine Harrison
Did *That* Character Really Die In The 'Stranger Things' Season 4 Finale?
By Grace Wehniainen
What Song Does Eddie Play in 'Stranger Things'? Metallica’s “Master Of Puppets” Ignites The Season 4 Finale
By Alyssa Lapid
Get Even More From Bustle — Sign Up For The Newsletter