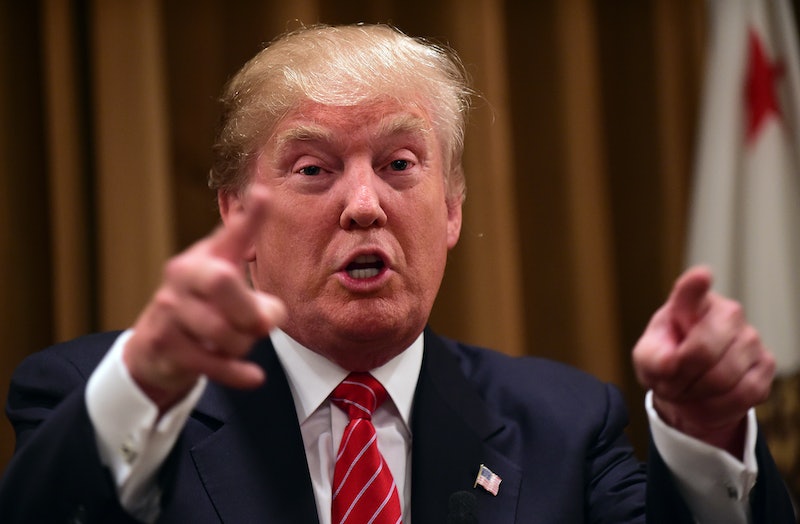 With the escape of notorious Mexican drug criminal Joaquin "El Chapo" Guzman, right now is probably not the best time to be on the record talking trash about Mexico and its citizens. Take, for instance, Donald Trump, whose remarks about Mexican immigrants blamed them for a host of illegal activity. Mexican immigrants to the U.S. are "bringing drugs, they're bringing crime, they're rapists," Trump said in the speech, for which he refuses to apologize. He added, "some, I assume, are good people." Oh yeah, and he wants a wall built along the U.S./ Mexico border, telling The Associated Press: "Nobody builds walls better than me, believe me." You can understand, then, why some El Chapo memes about Donald Trump have shown up on Twitter.

The Mexican government has already condemned Trump's comments, but at the moment, they have their hands full with the El Chapo escape. All flights have been grounded from Toluca airport near the prison, and a massive manhunt is underway.

Of course, El Chapo's escape (likely) has nothing to do with Trump, but when have the facts ever gotten in the way of a few good Twitter memes? Social media was off and running with the theory that perhaps Guzman wanted to have a few words with Trump over his anti-Mexican remarks. Chances are good that El Chapo was all "LOL O RLY" at Trump's promise to build a wall, since this isn't even his first prison break.

Officially, Trump appears unconcerned about El Chapo's whereabouts, using the incident to suggest that his racist comments were "right" after all.

But Twitter has other theories, and many think The Donald is just putting on a brave front, while panicking just a little bit behind the scenes.

Since he's ticked off most of his fellow Republicans and repeatedly bashed President Obama, it's unlikely that Trump has many allies he could turn to for help in his hour of need.

Does he have any options available to him, other than hiding in his giant mansion or hiring a security detail? Twitter came to the rescue once again with a few ways Trump might be spending his time.

It seems pretty far-fetched that a Mexican drug criminal wanted by several governments broke out of prison just to track down one American real-estate mogul with bad hair who happens to be running for president of the U.S. It seems more likely that Trump will use the incident to further smear Mexicans, many of whom suffered greatly during El Chapo's reign. Thousands of Mexicans have died in drug-related violence since the 2000s, as Guzman and other cartels battled for control. For anyone to suggest that El Chapo represents the average Mexican would be ridiculous. But making ridiculous claims is right up Donald Trump's alley.