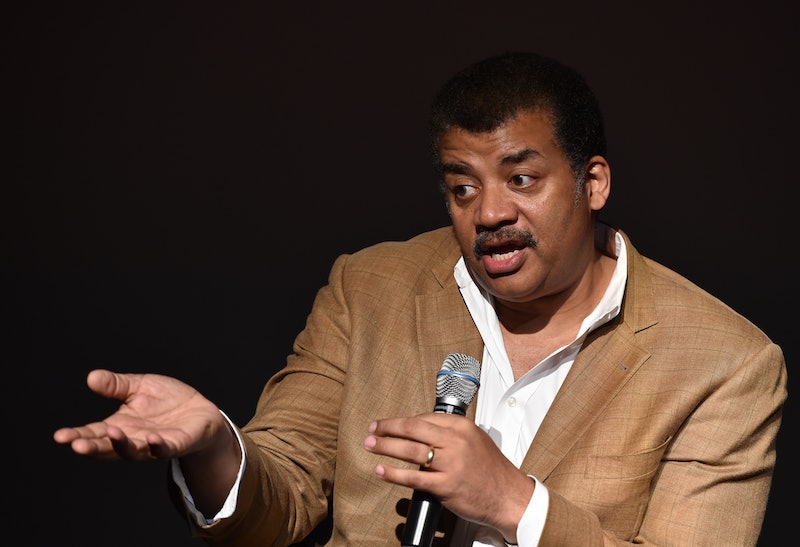 As science enthusiasts around the world prepare for what is expected to be our best glimpse of Pluto ever, the coolest astrophysicist on this planet seemed to be trying to rehab his reputation for being anti-Pluto. Neil deGrasse Tyson took to Twitter to explain his views on Pluto Sunday in a mini-rant that was part science, part humor and all Tyson. It so happens that Tyson was one of the scientists responsible for ruining the perfectly good mnemonic device "My Very Excellent Mother Just Served Us Nine Pizzas," which allowed schoolchildren to remember the names and order of the planets in our solar system. Pluto was reclassified as a dwarf planet in 2006, since it was discovered that its size and its orbit were not what was expected of a full-fledged planet. Not everyone agreed with the reclassification, and many Plutophiles expressed their displeasure.

But on Tuesday, NASA's New Horizons spacecraft will visit Pluto, the first ever to pass close enough to the planet (yes, I went there) to get pictures of its surface. This is a highly-anticipated event that is part of a 10-year-long mission. Harold Weaver, a scientist with the New Horizons Mission and a Johns Hopkins research professor, told The Washington Post that exploring Pluto would allow insights into the formation of our solar system: "It gives us the best window into what [it] was like just after forming 4.6 billion years ago."

Despite his role in its "demotion," Tyson clearly still has plenty of love for Pluto. He wrote a book called The Pluto Files, in which he collected the complaints he received when the downgrade was first announced. And on Sunday, Tyson used the hashtag #Plutofacts to get a few things straight about the little weirdo planet on the outskirts of our galaxy.

Tyson has been thinking about this for a while, clearly, and threw in a few actually fun Pluto facts in along with the science during his tweetstorm, making a little bit of fun of himself in the process.

But perhaps Tyson's best Pluto tweet was a couple of days ago, when he tried to show everything was cool.

There are many reasons why the exploration of Pluto is significant, according to Popular Science magazine. One of the principal investigators on the New Horizons mission, Alan Stern, said NASA doesn't don't know what exactly will show up when the spacecraft approaches Pluto; rings, moons, snow and ice volcanoes are all on the list of possibilities. They're ready for whatever, Stern said: "On Tuesday, it’s going to be raining Christmas presents, and we don’t know what’s inside them."

And, for all the heat he's taken over the years from Pluto "fans," it's clear that as the date approaches for the Pluto fly-by, Tyson is just as excited for this milestone in space exploration as any of the people at NASA.