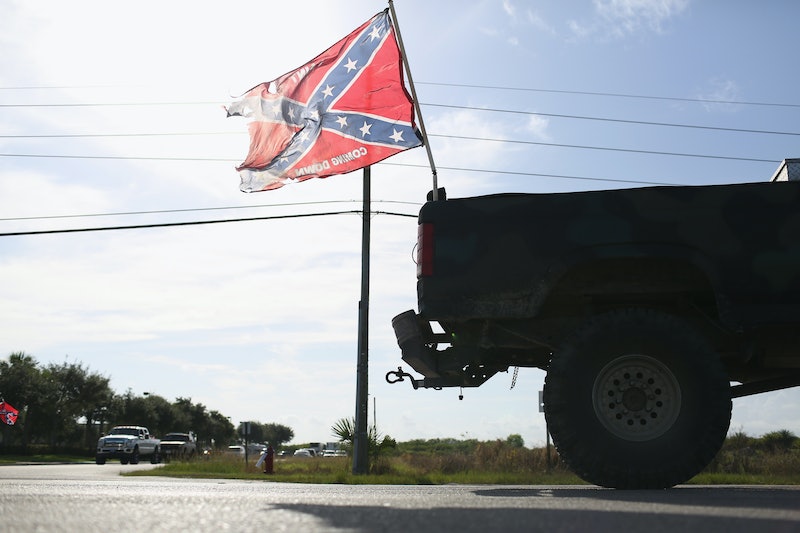 The confederate flag was officially removed from the South Carolina State Capitol on Friday. It was a celebratory event for all, especially to those who'd staged demonstrations in favor of the controversial symbol being taken down. Those feelings of elation were echoed by the hacker collective Anonymous, who think the confederate flag is "a symbol of hatred and oppression," according to a statement released advocating for a Million Person March on the Fourth of July. Said Anonymous:

We call on every American of good conscience to make their way to Columbia, South Carolina and march with us to the State Capital. We will sing hymns of praise, we will honor the fallen, we will feed each other, we will love each other. And together with a million voices and fists raised to the heavens we will demand one thing: The Flag Must Come Down!

The Independence Day march drew hundreds of activists as well as the NAACP, who sponsored the event. It was the second such rally against the flag following the fatal shooting of nine people at the Emanuel AME Church in Charleston. Anonymous has been consistently and vocally against the confederate flag since the shooting. They praised the efforts of Bree Newsome, who removed the flag from the South Carolina Capitol herself by climbing the flagpole that no longer stands there.

Anonymous commemorated the day the flag was removed rather quietly, retweeting a few recaps of the removal ceremony itself. Operation Ferguson, a subsection of Anonymous that helped organize the Million Person March, issued a tweet on Friday praising the move but also looking ahead to far more pressing issues:

Operation Ferguson is currently looking to remove Missouri Governor Jay Nixon from office and has launched a Change.org petition that has so far garnered 1,970 signatures. The accompanying letter with the petition calls Nixon a criminal, likening the governor to a Middle Eastern dictator.

Meanwhile, Anonymous has been back in the news for potentially causing the NYSE shutdown on Wednesday.