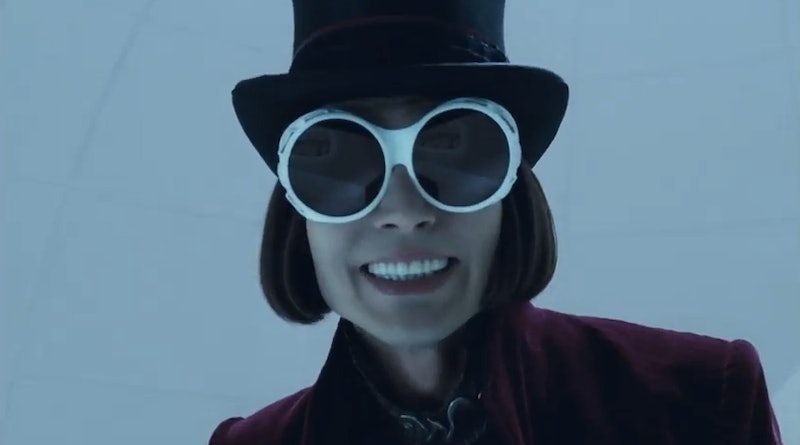 I mean, OK, I was on the verge of adolescence when the film came out, an already jaded 14 year old gothling. And despite plastering a giant Edward Scissorhands poster on my wall and own Nightmare Before Christmas bed sheets, I honestly couldn't get behind this venture at the time. But if you detach it from the OG Gene Wilder film and put it next to more recent Burton/Johnny Depp travesties, it's really not a bad piece of work. Moreover, there's definite nuggets of cinematic gold if you do a bit of digging.

So to celebrate the film's tenth anniversary, here's all the (odd and eyebrow-raising) 14 karat moments from Charlie and the Chocolate Factory.

1. This is a story of an ordinary boy named Norman Bates

No joke, this little darling is now fronting Bates Motel these days.

Who builds a tilted house in the middle of an industrial city?

Who builds a factory out of dented tooth paste tops?

4. "It’ll have 100 rooms, and everything will be made out of either dark or light chocolate"

Um. You mean, dark or MILK chocolate? Wonka's supposed to be the most famous chocolatier and he can't even get his chocolates straight.

AND WHO BUILDS A PALACE OUT OF CHOCOLATE?

5. Willy Wonka is pretty outdated when it comes to PR and marketing

Weirdly effective with his methods, because sales go through the roof after posting like three posters, but I HIGHLY DOUBT that Wonka Co. has a social media editor.

6. This doubles for the original, but it makes 0 percent sense that Grandpa Joe would ~magically~ regain control of his legs when Charlie gets his golden ticket

Also I can't believe the BOLD sense of entitlement when it says Charlie needs chaperone and he's instantly like, "I'll go!"

Grandpa Joe is the worst.

8. The loud "NOPE" that occurs during this scene

9. This expression of disgust when Wonka gets hugged by a child

10. Also when Wonka's weird PTSD makes him dry heave in the effort to say "parents"

Depp really tap dances on the intersection of Michael Jackson and Marilyn Manson in this movie.

12. And when this Oompa-Loompa dances with a cocoa bean on his head

My roommate had to point this one out, it is eternally baffling.

13. The absurd size of the Oompa-Loompa

I know they're supposed to be small, but they're scaled down to an uncomfortable size in this version.

It's "whipped cream" and Veruca (rationally is like "That doesn’t make sense."

And Wonka's all, "Whipped cream isn’t whipped cream at all unless it’s been whipped with whips. Everybody knows that."

16. When Violet starts turning blue and SHE KEEPS CHEWING HER GUM

Who uproots an apartment building and places it in an icy tundra?

I have plans to frame this image and hang it over my mantle.