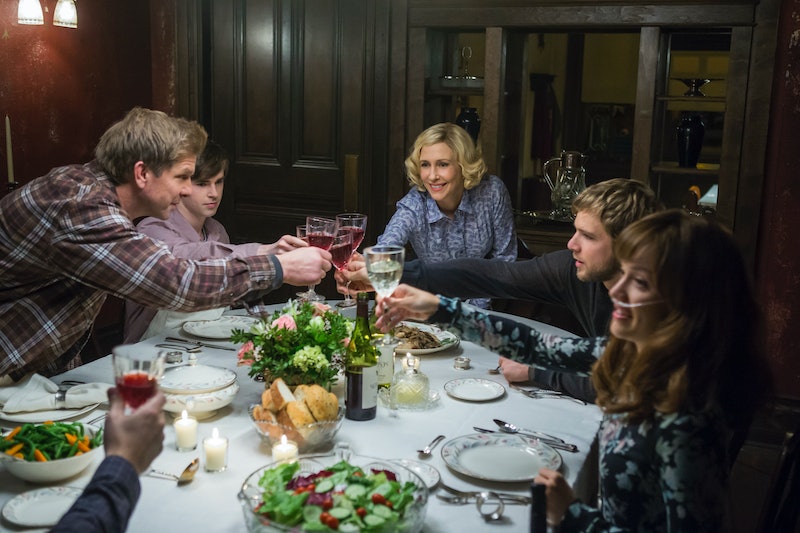 According to creators Carlton Cuse and Kerry Ehrin, they have a five-season plan for Bates Motel , their gripping prequel/reimagining of Hitchcock's Psycho. If this is true, then the current third season has taken us up to — and just past — the halfway point of their game plan. Poor, damaged Norman Bates has fallen so far in such a short amount of time, from the relative innocent we met in Season 1 to the unbalanced, increasingly violent psychopath he is now. It's amazing how much tension Cuse and Ehrin have been able to wring from this familiar tale; the combination of sadistic glee at witnessing Norman's descent into madness and simultaneously hoping he'll somehow avoid it is a potent one. So fans likely have only one question going into Monday night's season finale, "Unconscious": When does Bates Motel Season 4 premiere? I need more. Like now.

Actually, A&E has yet to officially renew its flagship drama for a fourth season — but fans shouldn't be too worried about the fate of television's most squirm-inducing mother/son relationship. As the network's first-ever scripted show and its most successful series, Bates Motel isn't going anywhere anytime soon. Cuse himself tweeted that Season 4 would commence shooting in "late fall, early winter" in response to a fan's query:

Motel has always debuted in March, with both of the past two seasons premiering in the first half of the month. If that pattern remains consistently, that means we can expect next season to bow on either Mar. 7 or 14, 2016. (God, that sounds like so long from now, doesn't it?)

While we all wait impatiently for Season 4 to premiere, here are nine activities to fill your time (and I promise you, they're all more stimulating than digging a giant pit in your front yard):

1. Tune In To The Season 3 Finale This Monday Night

Duh. Why would you miss it?

2. Root For Farmiga & Highmore At The Critics' Choice TV Awards

The nominations for the 5th Annual Critics' Choice TV Awards were just announced last week, and both the Bates Motel leads managed to find their way onto the ballot alongside such fan-favorite characters as Taraji P. Henson's Cookie Lyon (Empire) and Bob Odenkirk's Jimmy McGill (Better Call Saul). The ceremony will be held on Sunday, May 31 and will be broadcast live on Motel's home network, A&E.

3. Petition The Emmys & The Golden Globes

While it was gratifying to see critics lavish awards attention on the show, other voting bodies have rarely been so generous. Motel has only been nominated for one Primetime Emmy (for Farmiga in Season 1) and zero Golden Globes. It's time that changed. Picket lines, sit-ins, glitter bombs... whatever it takes to get Hollywood voters to wake up and pay attention to the greatness going on in White Pine Bay.

Most people don't know that Alfred Hitchcock's classic 1960 horror film was actually a book first. Published by Robert Bloch only a year before the Master of Horror adapted it, the book was inspired in part by the notorious murders of Ed Gein, who was arrested in 1957 for murdering two women. Psychiatrists determined the killer was attempting to make a "woman suit" so he could become his mother. (And here you thought Walt Disney had mommy issues...)

Once you've brushed up on the source material, settle in for a cozy night watching the film that singlehandedly kick-started the "slasher" genre. Then avoid showering for weeks afterwards out of paranoia. (Better stock up on deodorant first, now that I think about it.)

For another revisionist take on Bloch's twisted tale, check out Christian Bale's star-making turn as Patrick Bateman, a yuppie investment banker teetering on the edge of insanity. Or check it out again if you've already seen it. Multiple times. (If you're really committed, you'll also read the 1991 Bret Easton Ellis novel it's based on.)

7. Suffer Through The Remake

WARNING: This is only for when you're at your most desperate. If we're a month or so away from the Season 4 premiere and you truly can't wait any longer for more Bates family shenanigans, you can try to make it through Gus Van Sant's completely unnecessary shot-for-shot remake starring Vince Vaughn as Norman Bates. (The cast also includes Julianne Moore, Viggo Mortensen, William H. Macy, and Anne Heche in the infamous stabbed-in-the-shower role.)

If you start your Bates Motel refresher marathon at the beginning of February and watch one episode per day, then you'll definitely get through all 30 hours of psychotic goodness by the time the Season 4 rolls around in early March.

Bonus points for showing up in your mother's ugliest dress.