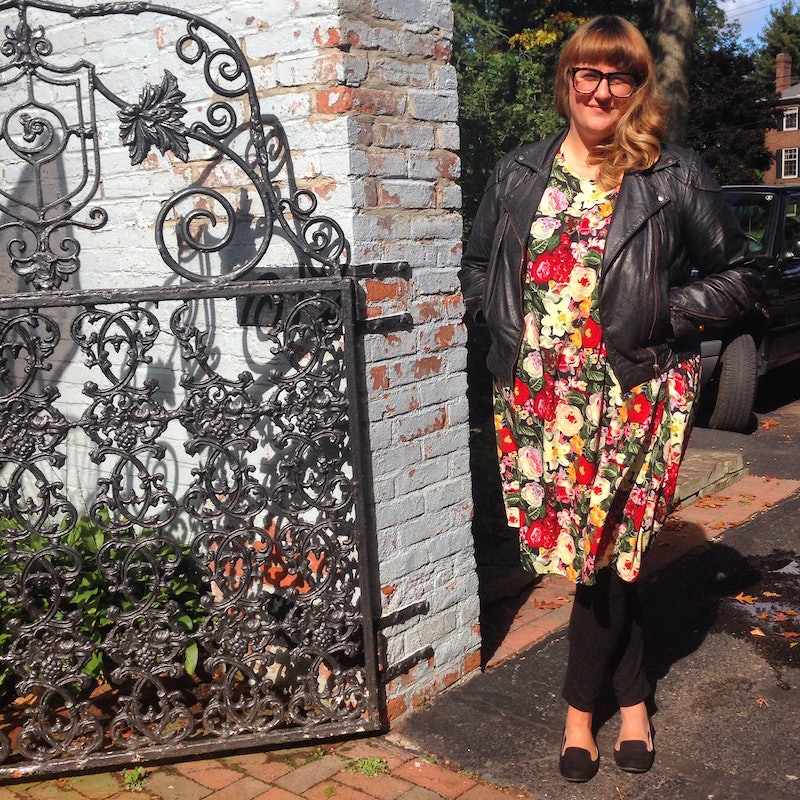 I wish I could say that the 2015 Miss USA pageant went as quickly as it came, but watching the show felt like bubbling in a cauldron of my own tears, stuck in some kind of unrelenting purgatorial dead zone. It's not the contestants' fault — the suffering I endured for three hours watching the competition was mostly due to the fact that the show came across as a high-definition bizarro Hunger Games situation, complete with its own orange-tinted Caesar Flickerman screaming into a microphone.

Between bouts of wanting to claw my eyes out (and screaming in bafflement when the singers started doing a schlocky rendition of "American Woman"), I thought about how events like the Miss USA pageant have all the ingredients to cook up a bowl of hot feminist rage soup. The women are paraded around the stage like show ponies, the cameras hover on their stomachs, asses, and breasts, and they take a forced cheery affect beyond the conventional human capacity to present convincing joy and compliance.

But then again, these women aren't trained dogs. None of them got here by accident. It takes a meaningful amount of will and effort to reach this point, and all 51 contestants put in a tremendous amount of work to get to the Miss USA stage.

(Clearly would have killed the swimsuit portion of the Little Miss Ohio competition.)

Additionally, there's something to be said about a program that puts all the effed-up parts of being a woman on display and spotlights them, as opposed to living in a society that pretends these beauty standards don't exist (we're all equal, man) and finding sneaky ways to hold women accountable to them anyways.

I've experienced the shame that comes with wanting to flaunt an interest in fashion and beauty. I love feminine stuff. From the age of two, I've been fascinated with dresses, makeup, doing my hair, and painting my nails. I've always indulged basically every feminine desire I've ever had, save for a small period of time in high school when I had a crisis of conscience and decided that those things were "superficial" and "didn't matter." I criticized girls who wore makeup to school, rolled my eyes at the mere thought of going shopping, and tried to front like I wasn't obsessed with the cheerleaders' abilities to do French braids.

(I was not a pageant girl, but I definitely loved pink and showboating enough to partake if the opportunity arose.)

Fighting against something that is part of your character is a very teenage thing to do, and luckily, I eventually grew out of it and back into my old self. And since then, I've been trying to figure out why women insist on passing these judgments on one another, and why we're only comfortable with femininity when it's subdued, or is presented with some kind of caveat. Feminine, but not too feminine. Beautiful, but effortless. Trying, but acting like you didn't.

And that's why when things like Miss USA come along, women become judgmental and make nasty comments about how fundamentally terrible things like beauty pageants are, claiming that it's because they exploit women and perpetuate bad ideas about beauty with regards to value.

Unlike the ways I'm using this platform to explain myself and my perspective, the women in the pageant are given absolutely no room for critical pushback. Their submission to a bunch of messed up, archaic notions of beauty and female behavior is presented without context and without a voice.

In truth, the emphasis on beauty in pageants is part of a larger game we all play. Our differences lie in the choices we make about how deeply we want to get into that game. When it comes to participating in the culture of beauty, most of us go in and set a hard and fast boundary for ourselves. We say, "I'm on this side of the line, I'm having fun and feeling good and enjoying my own interpretation of what it takes to be beautiful. But. I'm in control." At the same time, we say, "Those beauty queens don't know what they're doing. They're tools of somebody else, and they're perpetuating something negative."

But why shouldn't we grant these women the same autonomy we've granted ourselves? As feminists, why don't we take time to consider the fact that even though we may not understand why someone would want to be a beauty queen, odds are that she has reasons that are equally as valid as ours are for not wanting to be in one. Most importantly, if we're drawing our own lines in the sand, why don't we afford them the right to say, "Here's my line?"

Don't get me wrong: The Miss USA pageant was, for a lot of reasons, tremendously disturbing. But for me, scrutinizing and judging the motivations of the contestants distracts from the real problem: Unlike the ways I'm using this platform to explain myself and my perspective, the women in the pageant are given absolutely no room for critical pushback. Their submission to a bunch of messed up, archaic notions of beauty and female behavior is presented without context and without a voice. And because of that, it's easy to forget that they actually have one.