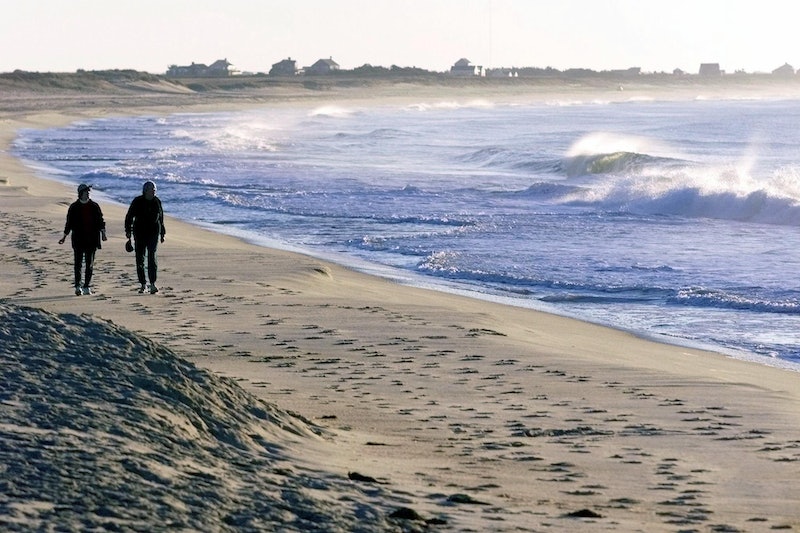 As An Old, I encountered my first selfie stick only just this past Fourth of July. It sat all sinister on a picnic table among hot dog debris and when a dude I didn't know try to make polite conversation about it, asking how it worked, I literally ran away. Turns out I'm not only rude for fleeing, I was also super wrong in my assumptions selfie sticks exist only in a pure fit of vanity. A 16-year-old girl says a selfie stick saved her life during a riptide in Nantucket Tuesday afternoon.

First off, rip tides are some scary business—whether or not you're hip to what they actually are. Rip currents are naturally occurring currents in the ocean that move at speeds up to eight feet per second. I grew up on the East Coast, where they are most prevalent, and experienced them at an early age. They pull with such superhero strength and come seemingly out of nowhere, they feel like an IRL nightmare with the capabilities to drag you out into open water with dizzying speed. Rip tides can be deadly in the sense that, if you try to fight it, you can quickly become exhausted and possibly drown.

Erynn Johns and her parents were hanging the posh Massachusetts beach for a chill little family vacation when a rip tide rolled in. At the moment, Erynn was handling a selfie stick, and caught the whole terrifying experience.

If you think Jaws was scary, prepare to never want to approach the beach again. Because unlike enormous, human-hungry sharks, rip tides happen a lot and if you don't know to swim parallel to the coast until the current eases up, you're screwed. Lucky for Johns and her family, they had the selfie stick to cling to and effectively stick together.

Although the selfie stick surely helped some, the real hero is Tommy Vach, but he wasn't immediately identified. Vach spotted Erynn first and rushed in to drag her back to shore, going in again after with lifeguards to fetch her folks who were farther out. Vehicles escorted the Johns to the hospital so quickly, they didn't initially have a chance to thank "the mysterious man in orange shorts." However, when Vach saw Erynn's footage on the news and recognized himself, he decided to own up to his heroic efforts. Thankfully, the whole Johns clan has since recovered.

About the whole ordeal, Vach said: "It doesn't matter who you are, how strong of a swimmer you are. Riptides are very dangerous and to fight them can cause fatigue and you have to keep your wits about you."