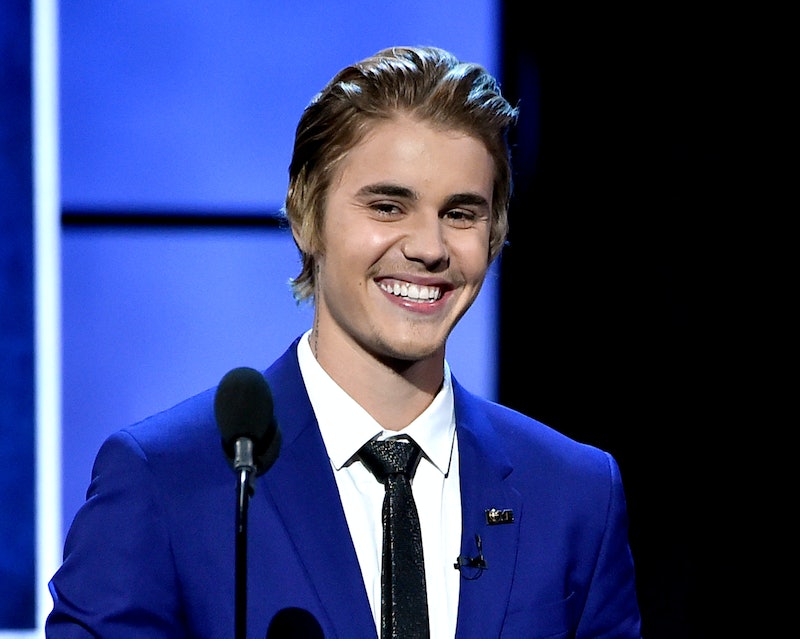 Well it's official, guys: If you want to look at Justin Bieber's bare booty, you'll have to search somewhere other than his social media accounts. Remember how last week, Bieber shared a photo of his butt on Instagram and the Internet went nuts? Besides the fact that it was, you know, Bieber's ass on the internet, it also highlighted a huge double standard whereby men are praised for showing off their birthday suit while women are shamed. But if you've checked his account since then, you probably already noticed that Bieber's butt pic has been removed. And no, it wasn't because he was bummed about said double standard, although that would have been awesome. Instead, it was for another pretty good reason: He was worried about what kids might think.

According to the picture and apology he shared in the legendary photo's place, Bieber explained that the daughter of a close friend was uncomfortable seeing the backside of someone she actually knows in real life, and that made Bieber realize that he may actually be offending people and not just making them laugh. After all, do you really want to see a friend of your parents' butt, even if he is young and a very successful pop star? Probably not. That's weird.

This is a good sign that Bieber actually is growing up, and that his recent apology tour wasn't all for naught — it's also solid proof that he cares about kids, especially his younger fans. But this isn't anything new. Bieber has always especially cared about kids, and in a world where it's super easy to loathe him for the mistakes he's made in the past, his love for children is one of his most redeeming qualities.

He's obsessed with his little brother

And honestly, who wouldn't be? Five-year-old Jaxon is ridiculously adorable

If you follow Bieber on social media, you probably already know about Avalanna Routh, the six-year-old Bieber fan he met while she was struggling with brain cancer. Unfortunately, she passed away in 2012, but Bieber made every effort to make her time on earth as special as possible, including taking time to play with her and even staging a pretend wedding with her so she could officially become Mrs. Bieber, like she dreamed.

Since he's close friends with the Kardashians (especially Kendall and Kylie Jenner), it's kind of adorable that he plays with the little ones, too. Mason seems to be having fun!

He contributed a lot to Pencils of Promise

Bieber is far more charitable than you'd imagine someone who once peed in a mop bucket would be. One of his favorite charities to support is Pencils of Promise, which was founded by his manager Scooter Braun's brother. Through his fundraising efforts, Bieber was able to open a school for children in Guatemala. Pretty impressive, no?

Under all the tattoos, butt selfies, and bad decisions, Bieber definitely has a good heart, especially when it comes to kids. And if he wants to keep redeeming himself, doing things like removing awkward photos from Instagram is a very good place to start.

More like this
Justin & Hailey Bieber's Bond Is "Unbreakable" Amid His Ramsay Hunt Diagnosis
By Bustle Editors
Selena Gomez Is Fine Being Single, But She Still Manifested Romance On 'SNL'
By Martha Sorren, Jake Viswanath and Jack Irvin
EJ Marcus Runs The Most Wholesome Corner Of TikTok
By Alexis Morillo
Prince William & Lorraine Kelly Lead Tributes To “Truly Remarkable” Dame Deborah James
By Sam Ramsden
Get Even More From Bustle — Sign Up For The Newsletter