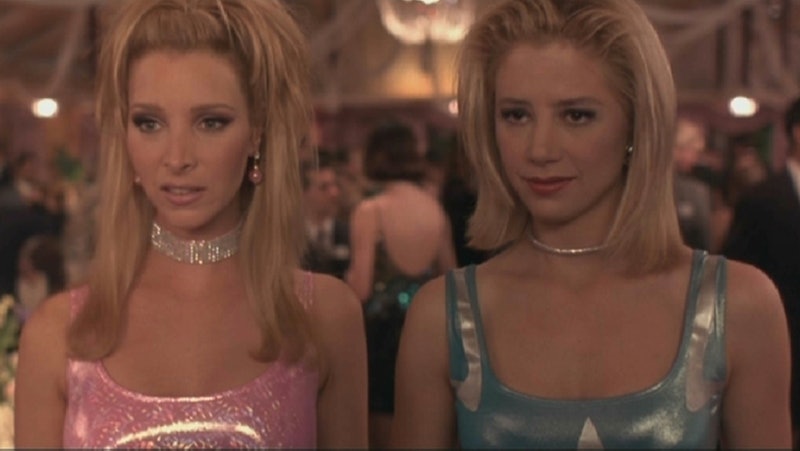 In our era of peak social media engagement — a time when we can all instantly find out what our aunt had for lunch or what our childhood gymnastics teacher thinks of the new season of True Detective — the ritual of the high school reunion seems a bit outdated. I mean, why travel hundreds of miles to find out if the people you loathed as a teenager are unhappy now? You can figure that out after 30 seconds of perusing their Pinterest pages ("Wow, Becky's pinning a lot to her 'To visit someday, when my husband isn't such a DICK' board lately, huh?").

And the statistics bear this out — according to a 2011 New York Times article, as social media becomes more popular, high school reunions have become less so. Which makes sense — if you already know which of your old classmates are doing well, which aren't, and which were recently arrested after a nude high-speed Segway chase with the cops, what value could attending a high school reunion possibly have?

And yet, there will still always be goobers foolish enough to go to their high school reunion — goobers like me. I attended my 15th reunion last month — ostensibly because I thought it might make for an entertaining article, but really, because pop culture has always made reunions seem like such a big deal. I was 15 the year both Grosse Pointe Blank and Romy and Michelle's High School Reunion were released, and they both entranced me with their take on the reunion — a version of adulthood where you could grow and change into someone better than you awkward teen self, and still somehow be validated by the people who once bullied you in Algebra.

Guys, it turns out that that is not what high school reunions are like. At all. I know many of you are about to attend or are contemplating attending your reunions in the near future — for you, I present five things that will almost definitely not happen at your high school reunion.

1. Angry Recriminations About Prom (Or Pretty Much Anything Else)

How It's Supposed To Go: You're gonna settle the score, air dirty laundry, and allow the former underdog to rise to the top.

After 10+ years, most people are working serious jobs, have moved, changed immensely, and may have even had tiny little people fall out of their bodies and demand their care. All of this sets the stage not only for letting go of any lingering high school beefs, but for literally forgetting high school. As I scanned the room at my own reunion, I knew that I must have hated some of these people, but I couldn't quite remember who or why. I found that I had crisper recall of the plot details of Gossip Girl than I did my own high school intrigues.

And, of course, "underdog triumphs at reunion" stories also miss one crucial fact: people who hated high school don't usually go to reunions. In reality, all the Romy and Michelles are probably out with their real friends, rolling their eyes at the idea of wasting time impressing people that they haven't thought about in half a decade.

How It's Supposed To Go: You're going to get a second chance at love (or at least sex) with the person you lusted after in high school — who now finally sees your for the emotionally complex and genital-scorchingly hot person you are.

How It Actually Goes: Hey, I'm sure that somebody gets laid at high school reunions. But I'd be willing to wager it's based more on who is attracted to who now, because high school crushes do not age well.

And I don't even mean that literally — I mean that your sexual tastes have really broadened and changed now that you are a sexual adult who has had actual real adult sex that doesn't involve a curfew or your mom's mini-van. Remember the ecstatic sexual swooning you used to feel when you looked at Justin Timberlake's crunch-perm, or Willow from Buffy's tasteful crushed velvet Ren Faire ensembles? OK, how do you feel about those things now? Yeah, your attraction to your high school crush has probably gone the same way.

If you do hook up with your high school crush, more power to you. But chances are, they will seem roughly as appealing to you now as Hoobastank, chalupas, those gross hemp necklaces with the little clay bead in the middle, and whatever else you were into in high school.

As Seen In: Romy And Michelle's High School Reunion; American Reunion; It's Always Sunny In Philadelphia; The League

How It's Supposed To Go: Riddled with anxiety over the fact that your life may not be exciting enough on its own, you make some stuff up.

How It Actually Goes: Sure, smartphones have eliminated the possibility that anyone can falsely take credit for inventing the Post-It at their reunion. But I felt like the bigger barrier to this is the fact that you just don't care. My original assignment from my editor was to attend my reunion and be totally honest with everyone there — an idea that gave me heart palpitations. How would my off-center life choices (no kids, no marriage, satisfying but low-paying career, ownership of more than fifteen items of certified X-Files memorabilia) read to all my former classmates, who were all probably living normal, X-Files-free adult lives? I actually got nauseated with nerves on the train ride to the reunion, worrying about it.

Only to find that...no one cared. I mean, maybe I just got lucky. But I think it was because we were all adults. And most adults are way too exhausted and immersed in their own thing to really get judgey with people they haven't seen since Dawson's Creek was a thing.

Caring about the opinions of people at your reunion creates great dramatic tension in a film, and judging former classmates on Facebook is a great way to kill some time while waiting for the bus. But at an actual reunion, honestly, people just want to complain about their jobs and load up on chardonnay before the open bar closes.

As Seen In: Romy And Michelle's High School Reunion

How It's Supposed To Go: Everyone from high school finally realizes how great you are.How It Actually Goes: Weren't you listening when I said no one cares? Seriously, no one cares. People are just looking to get loaded while their kids are with a babysitter and/ or placate their one friend who's on the reunion committee by showing up.

Which, if you want my two cents, is probably more genuinely validating than the validation of some now-strangers who were in your math class.

As Seen In: It's Always Sunny In Philadelphia; Party Down

How It's Supposed To Go: The "Angry Recrimination" is supposed to end one of two ways: either with Triumphant Acceptance, or with a crippling depression that will make you feel worse than you did on the day in 10th grade when you dripped period blood all over your new Keds. Hell, this story is even part of the traditional narrative of the decline of Janis Joplin; the Texas State Historical Association website notes that Janis's lukewarm reception at her 10-year reunion may have led to her heightened drug abuse and eventual death, two months later, in October 1970.How It Actually Goes: I will not argue that no one gets depressed after going to their high school reunion. But the bigger emotional takeaway, for me, was a reaffirmation that this is totally, utterly, not your life any more. It seemed difficult to get depressed over this strange, silly party, thrown to celebrate the ghosts of the people you used to be. People just go to high school reunion because they're an escape from reality — the closest you'll ever be able to come to actually crawling into a #ThrowbackThursday. But they have nothing to do with your real life. So if anything, reunions are a time to congratulate yourself — because no matter what your life looks like now, it is so different from the life you lived back when you were so young and scared and desperate to fit in. OK, so maybe it is a little cathartic. But probably nothing worth writing a movie about. Also, if you did hook up with your crush at your reunion, send pictures to me care of this website. I have some very valuable X-Files merchandise I can trade you for them. Images: Touchstone Pictures, Giphy (4)

More like this
American Girl Doll Memes Are Going Viral On Instagram & Tiktok
By Emma Carey
All The Sneaky Lindsay Lohan Movie Easter Eggs In Her New Ad, Explained
By Stephanie Topacio Long
The 'Hocus Pocus' Sequel Finally Has A Release Date & It Makes Total Sense
By Shannon Barbour and Radhika Menon
Everything To Know About 'My Big Fat Greek Wedding 3'
By Grace Wehniainen
Get Even More From Bustle — Sign Up For The Newsletter