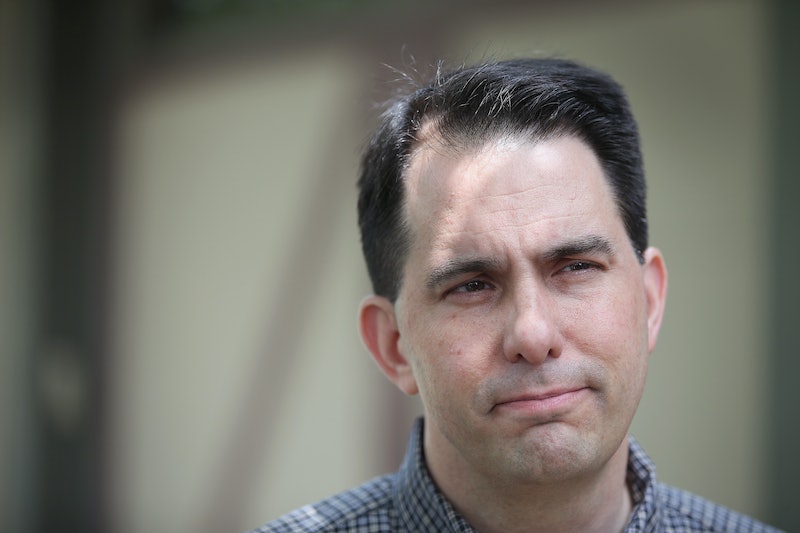 Wisconsin Republican Gov. Scott Walker officially announced his 2016 presidential campaign, making him the 15th Republican candidate in the race. In a tweet Monday morning, he declared, "I'm in. I'm running for president because Americans deserve a leader who will fight and win for them." But Scott Walker's stance on the environment shows how anti-green this guy actually is.

Some politicians don't prioritize the environment and just don't seem to care. But not too long ago, climate change and environmentalism were up for debate. In a day and age where the Pope is declaring his support to fight climate change, the tide is turning and the environment is expected to be a major issue in the 2016 presidential election.

Scott Walker, on the other hand, seems to be making an active effort against any sort of environmental action. Walker has a history marred by anti-environmentalist policies — he spoke at a climate change deniers event, and outwardly rejected EPA regulations. In Slate, the executive director of the Wisconsin League of Conservation Voters, Kerry Schumann, called out Walker's anti-environmentalism:

He really has gone after every single piece of environmental protection: land, air, water — he's left no stone unturned. It's hard to imagine anyone has done worse.

Here are six things to know about Scott Walker and the environment.

His Lack of Support Is No Secret

Scientific American reported that in 2008, Walker joined the "No Climate Tax Pledge" to never support climate laws that generated government revenue. According to Madison.com, this means, "no legislation on climate change without an equivalent amount of tax cuts." The pledge is supported by the Koch brothers' organization, Americans for Prosperity, which is responsible for millions of tons of carbon emissions. Any carbon tax law would be extremely costly for them. The billionaire brothers have supported Walker and other conservatives, according to Madison.com. Slate reported Americans for Prosperity donated $11 million to Walker during his 2012 governor recall election.

Walker has taken Wisconsin backward in efforts to curb pollution. For example, according to Scientific American, right before Walker took his position as governor in 2010, Wisconsin enacted rules limiting phosphorus release. When too much phosphorus runs into streams, lakes, rivers, and other bodies of water, it fuels the growth of algae, leading to less oxygen and killing animals like fish. When he took office, Walker said these regulations would be "too expensive" and in 2014 signed legislation that scaled back the phosphorus regulation if it was a "financial hardship." Guess who didn't like those phosphorus regulations? His financial supporters the Koch brothers. Surprise, surprise.

He Fired A Bunch Of People On Earth Day

Nothing says "Happy Earth Day" like laying off 57 Department of Natural Resources (DNR) employees. According to the Milwaukee Journal Sentinel, this is how Walker celebrated Earth Day this past April. His recent budget announced in February called for the removal of a third of DNR scientists' jobs and 60 percent of DNR environmental educators.

He Isn't Afraid Of Cuts

In his most recent budget approved Sunday, Walker effectively destroyed a program to clean underground fuel tanks. Initially, the program set 2020 as the deadline for residents to report leaking fuel tanks underground and get government clean-up assistance. What did Walker do? He changed the deadline to next week, approximately five years earlier than originally intended.

Reduce, reuse, but don't recycle? At least carbon taxes and other legislation is somewhat controversial, but ask any middle school student and they know the "reduce, reuse, recycle" mantra. Recycling is widely accepted as a positive and easy way to be greener. In February, Walker proposed a dramatic 50 percent slash in recycling programs throughout the state. Rick Meyers, chairman of the council and resource recovery manager for the City of Milwaukee explained, "It seems shortsighted to cut the funding. It's only going to suffer."

His Public Remarks Are Laughable

Walker might claim to be a leader who will fight for Americans, but that fight clearly does not include any mention of the environment.