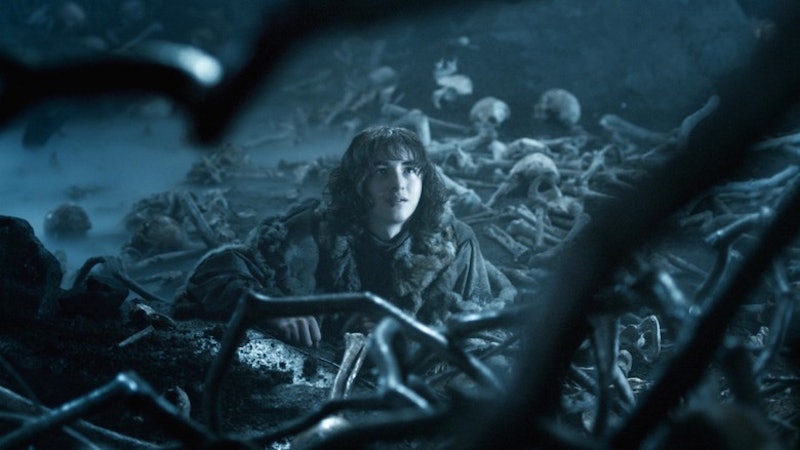 Here's some Game Of Thrones news that might actually cheer you up, even though that seems impossible: Bran is most DEFINITELY coming back next in Season 6. After being conspicuously absent from Game Of Thrones ' Season 5, Isaac Hempstead-Wright, who plays the young Stark with the power to see prophetic visions, confirmed once and for all on Sunday that Bran is definitely back. The 16-year old actor told the Irish Examiner, "I can’t say a lot but I am back this season, and it’s going to get particularly interesting with Bran. He has some interesting visions." He also said that he hasn't yet had a chance to watch Season 5 since he was busy with exams, which is probably for the best, since it was such a big bummer. So let's catch up with where we left Bran Stark, maybe the last good-hearted little dude left in Westeros, way back in season four (it seems so long ago).

There was a fuss when the show-runners announced ahead of Season 5 that Bran Stark would not be returning (meaning nor would Hodor).They assured the viewers that it was for the best, that a period of absence would make the heart grow stronger, but not as strong as Bran, who’s been busy training. Game Of Thrones show-runner David Benioff compared Bran’s return in Season 6 after his off-screen transformation to Luke Skywalker’s legendary comeback: “It would be far less interesting, after The Empire Strikes Back to have an hour-long movie in between Empire and Return of the Jedi where Luke is training. It’s so much cooler to cut from end of Empire to beginning of Return, where he’s become the Jedi,” Benioff told Entertainment Weekly.

In Season 4, Bran was traveling beyond the Wall with Hodor and Jojen and Meera, continuing on their quest to find the Three-Eyed Raven. Bran has learned that not only does he have the greensight, which allows him prophetic visions, he is also a Warg, and a powerful one at that; he can possess the mind and body of animals and even some humans, as he does when he takes over Hodor’s body to kill Locke at Craster’s Keep. He can also Warg with Heart trees, the weirwoods that the Children of the Forest have carved faces into; doing so lets him see not only the future but the present and past.

Bran’s been holed up with the Three-Eyed Raven, who he (and we) met in the Season 4 finale “The Children” when Bran, Hodor, Jojen, and Meera finally arrived at the Raven’s cave. Their group is overcome by an attack by the wights, who kill Jojen, but the Three-Eyed Raven tells Bran that Jojen had to die for Bran to find what he had lost. And that’s nothing short of MAGIC! After Jojen is killed, a mysterious Child of the Forest appears and burns Jojen's body so he is unable to be reanimated by the White Walkers, and leads Bran and Meera into the cave where they meet the Raven. Who, as it turns out, is not a bird at all, but an ancient man whose body has fused with the magical weirwood around him.

So Bran and Hodor are certainly going to be back — but what are they gonna get up to? Unfortunately, we Game Of Thrones fans find ourselves in a tricky situation: George R.R. Martin’s A Song Of Ice And Fire book series has caught up to the television series, and it’s anyone’s guess when he will finally finish and publish the volume he has in progress, The Winds Of Winter.The only chapter that has not been adapted from his last completed book A Dance With Dragons is that in which Bran is training and strengthening his magical abilities with the Three-Eyed Raven.

Some theories suggest that Bran Stark will meet again with his brother Jon Snow, if Jon Snow is not, in fact, dead as a doornail as he appeared to be in the Season 5 finale when he is murdered by the men of the Night’s Watch. Bran’s magical powers could have healing elements, after all. Some other theories go so far as to say that Bran Stark will end up being evil. A theory posted in the A Song Of Ice And Fire forum proposes that while Bran has been holed up in the cave, he has been transforming into a White Walker or an Other, that perhaps the Children of the Forest have selfish reasons for summoning Bran to the Three-Eyed Raven.

As for Hodor, his character might see some developments in Season 6, as well, if the actor who plays him as anything to say for it. Kristian Nairn, the beloved actor who plays the gentle giant of very few words, told the Hollywood Reporter his wishes for Hodor for the future: “I would like him to sort of progress. Speak a bit. A few lines wouldn’t go amiss.” If Hodor can speak, would he be speaking as himself? Or as Bran, Warged into Hodor’s body? We have a long wait ahead of us, as it’s still anybody’s guess when The Winds Of Winter will be published, but we do know for sure that Season 6 will see a lot more action for the young, magical Bran and his companion Hodor beyond the Wall. What does Hempstead-Wright want to see? Maybe Bran warging into an eagle — and at this point, anything is possible.