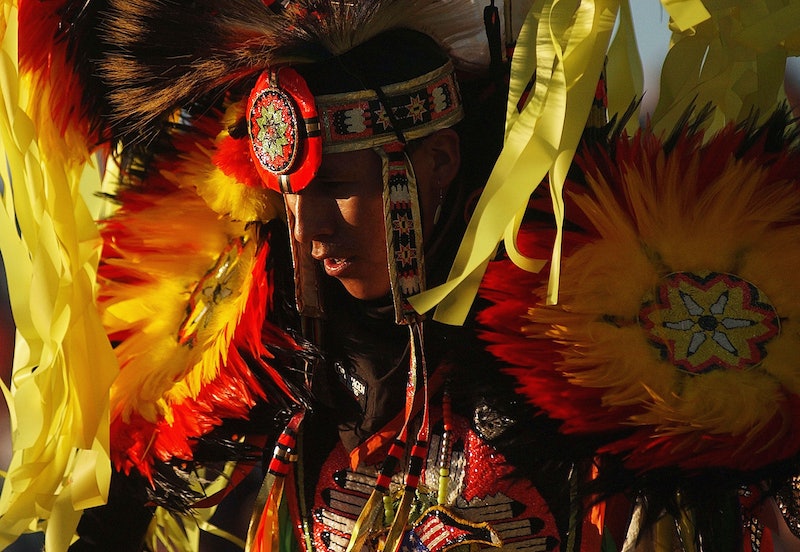 Reddit user commodity_for_all on Monday did a unique "I Am A Navajo" AMA that covered what it was like to be half Navajo and growing up on a Navajo reservation in Mexico. The thread garnered more than 1,000 replies, with questions ranging from topics like Navajo Nation government and religion to drug use and relationships with other tribes. At a time when American Indian folks are routinely silenced and institutionally oppressed, it is valuable for such an important conversation to be taking place on a public platform, and exciting that it generated so much attention.

Before starting the AMA, commodity_for_all explained they are half Navajo, with a dad who is half Mexican and half white, a maternal grandfather from the Tangle People clan and a white paternal grandfather. Commodity_for_all mentioned they from the Bitter Water clan, and their family is traditional, or pagan. Included in the introductory post were two pictures (as "proof" the Reddit user was who they said they were): One of their family butchering a sheep and another of their family hogan, used for ceremonies and gatherings.

I took a look at some of the most unexpected or interesting responses from the AMA, including well-thought-out comments about cultural appropriation and a brief analysis of cultural preservation. Here are some of the more thought-provoking answers provided by commodity_for_all, who, in a recent edit, reminded people their opinions did not represent the Navajo Nation as a whole.

commodity_for_all: They should shut their mouths because a lot of Navajos make a living off of their craft.

commodity_for_all: For leggings and all that shit it's generic. But once they start using actual designs that come from a specific weaver that's when they cross the line.

commodity_for_all: The reservation itself. Flea markets specifically and trading posts near the reservation. Never buy from truck stops or even online. If you can, have a Navajo or Native friends buy for you. Silversmiths often pull the price up for tourists. Random but my step-dad is a silversmith! :)

commodity_for_all: In my opinion, it should go. The mascot does not represent my tribe but for the sake of others who are affected by its imagery. A lot of Navajos don't mind but I think the more progressive, younger generation, like myself, care. It's kind like of our cry out to the world that we are still here.

commodity_for_all: It all depends on the imagery of the mascot.

commodity_for_all: I try not to [sic] close minded but Christianity. It's not like they're hurting anybody physically but they do hinder the preservation and survival of our culture.

commodity_for_all: My family is traditional. I have some resentment towards those who converted but I can't hate. They are always super preachy too.

4) On The Confederate Flag

commodity_for_all: I honestly don't care. I'm liberal and I like watching it from the sideline because it all seems like one big joke to me. I'm neutral because I think the same argument can be made for the American flag. It was being carried when the U.S. Cav came rolling through our homeland burning crops and killing women and children. It was being flown over our place of internment and it was being flown over the boarding schools that were beating children for speaking Navajo. It's a flag. It can symbolize what ever you want it to symbolize. It can stand for oppression and it can stand for freedom. But in the end. It's a piece of cloth. Edit: For clarification, the heritage argument is BS. I do not condone the flag being flown over the state capitol.

5) On Drugs And Alcohol

commodity_for_all: Alcohol among youth not so much, like any group of youth you have those who like to party. Drugs among youth, maybe just weed but I really don't see that as a very destructive substance. It's hard to actually tell if there's a drug problem because everything is spread out so far and not concentrated. The reservation is dry so it helps. Most of the bad alcoholics I know are middle-aged adults.

commodity_for_all: My family is traditional. It's not rare but there are a lot of Christians. About six years ago drugs and gangs were bad but the tribe created a task force to break down gangs and drug distribution and it worked really well. I see a lot less of it now.

commodity_for_all: Navajo Nation government is joke. They only represent their own interests. There's a grass-roots movement that's in the process of writing a constitution. I support it all the way.

commodity_for_all: I think one is that we all get checks from the government. I went to boarding school and I always had non-natives (I say non because it's not just white people that have misconceptions) tell me, we get checks. Never asked if we did, just always assumed. For the Navajo and a lot of the tribes of AZ and NM, we don't get checks. Another misconception is that we are all the same. Same language, same culture, etc. I had to battle a lot of stereotypes at boarding school. Even argued with some teachers and got a substitute fired. For misconceptions on our side. Depending how you are raised, a lot of kids had misconceptions that all white people are wealthy. As you get older and been around, you see that it's not true. I think it stems from the fact that most of the non-natives on the reservation are doctors or single teachers. The cost of living is low on the reservation and the paycheck of a doctor can go a long way.

commodity_for_all: She basically told a class full of Navajos that we stole our culture from the Mexicans and that we're all poor because we don't believe in God.

As this AMA revealed, major issues facing marginalized populations are very rarely what outsiders perceive them to be, and it is important to amplify — and listen to — marginalized voices in order to learn from them.