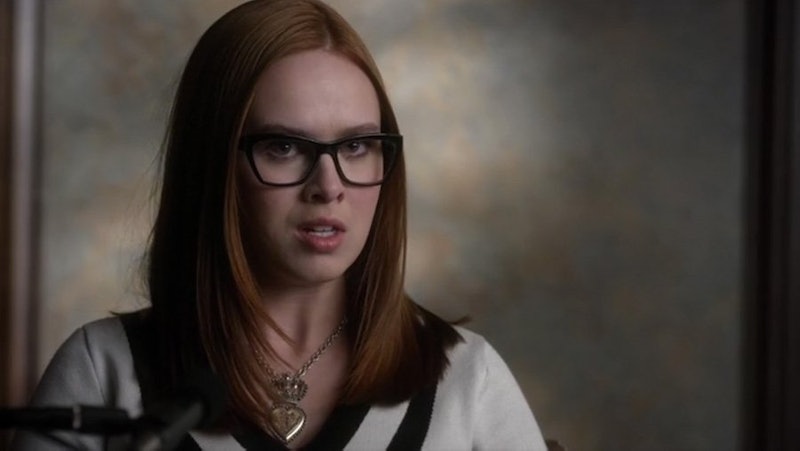 Oh, Pretty Little Liars — you never cease to surprise me. Just when I thought I had mined Pretty Little Liars for every clue imaginable, someone on the internet reveals something jaw-dropping that could change everything we know about the show. This week, a Pretty Little Liars Wikia user discovered something that could open up entirely new possibilities for one of the show's characters. RedIsNewBlack discovered that the ABC Family synopsis for the episode "She's No Angel," which aired on June 30, stated that Lesli Stone has a sister. Yep, the redhead Radley alum's sister was supposed to make an appearance in the episode where Lesli returns to Rosewood, which is a real head scratcher, considering she, well, didn't.

Here's what the synopsis from ABC Family's official website says:

Mona returns to Rosewood in a very fragile state as she must answer to the police for faking her death. Matters only get worse when she is confronted by Lesli’s sister about Lesli’s inadvertent involvement in Mona’s plot. Hanna is determined to help Mona out, not only to reassure her she is safe from Alison but also to try and repair Mona’s friendship with Lesli.

In the episode "She's No Angel," a similar situation does occur — only instead of Lesli's sister who confronts Mona, it's Lesli herself. It's a very minor part of the episode, as by the end of the episode it is revealed that Lesli was once a patient at Radley, and now very high on the A suspect list.

There's always the possibility that ABC Family simply made an error in their synopsis, or that they had hired an actress to portray the sister but decided that they could have Lesli perform in the scene instead. But let's imagine that Lesli does have a sister who will be revealed at a later date — what could that mean for the show? Here are a few potential theories as to how Lesli's sister might fit in to all of this.

Lesli Switched Places With Her Sister To Get Out Of Radley

This happened in the Pretty Little Liars book series: Alison's identical twin sister Courtney switched places with Ali, inadvertently banishing her to a mental institution for years. Perhaps Lesli has an evil twin out there of her very own. Perhaps Lesli doesn't have dramatic mood swings after all — she's just two different people. Lesli's own sister (or Lesli herself) could have been working for A this entire time and able to get away with it because hardly anyone knew about the other.

In the Season 2 and Season 3 Halloween episodes, the same blonde little girl makes an appearance. In Season 2, there are actually two identical twins — they are a part of Ali's Halloween story in which one twin kills the other over a doll. In the story, the killer twin gets sent to a home for the criminally insane, which sounds eerily similar to Radley. That could be the reason Lesli was sent to Radley in the first place, even if her sister actually survived her stabbing injury. The little girl ghosts could be the ghosts of Halloween past and not a legitimate spirit.

Lesli's Sister Is The One Connected To Charles

The girls may think that Lesli is A, but there's no way that the show would reveal A just episodes before the epic Season 6A finale. That doesn't mean that Lesli isn't connected to this overall A mystery, of course — perhaps the reason why we didn't meet Lesli's sister in "She's No Angel" is because it's her that is working for A and the writers didn't want it to be too obvious just yet.

Lesli's Sister Is Helping Lesli Get Revenge On The Girls

We don't know much about Lesli or her history, so there's always a chance that she really does have some vendetta against the girls and connected to A in a way that we could never imagine. If so, perhaps it's Lesli's sister who helped fuel her A rage while she was stuck in Radley. Weirder things have happened on Pretty Little Liars, right?