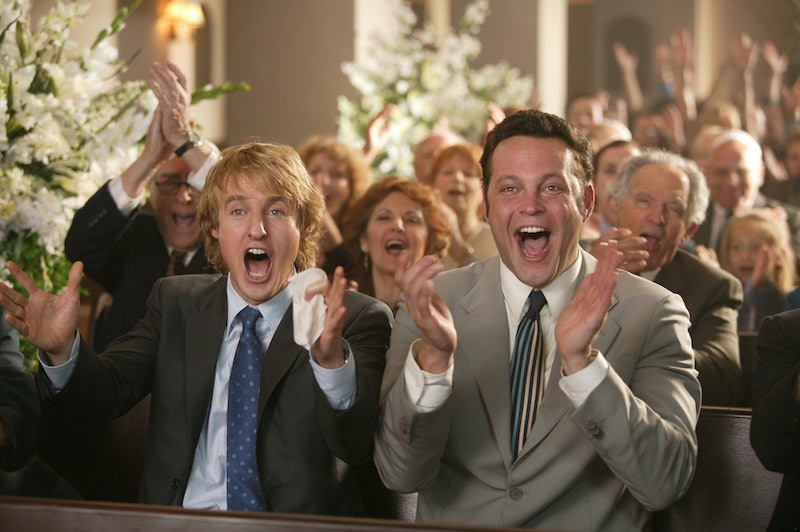 Wedding Crashers is just one of those always-quotable movies, and for good reason. It’s full of very funny lines said by very funny comedians. It re-launched the career of Vince Vaughn, introduced the world to the hilarious tornado that is Isla Fisher, showed us how well Bradley Cooper could play a jerk, taught us that you can’t take back a gift (especially a personalized painting), and let us know the value of an unexpected-yet-well-placed cameo. What’s not to love about that?

In case you haven’t seen the movie (which, what?), Wedding Crashers is the story of John Beckwith and Jeremy Grey, two best buddies and complete womanizers that spend their weekends crashing local weddings and scouring the events for emotional, vulnerable women. When John and Jeremy crash the Cleary wedding, all bets suddenly are off — John begins to fall for Cleary daughter Claire (who is already in a committed relationship), while Jeremy begins a fling with Claire’s younger sister, Gloria. Will their wedding crashing ever be the same? Will this Peter Pan-esque duo now be forced to grow up? If you’ve seen Wedding Crashers as many times as I have, you surely know all the jokes, but I bet there are a number of facts about the movie that you don’t know.

Congress Wasn’t Happy With The Film

Jeremy and John used Purple Heart badges to pick up girls, which were available for printing on the movie’s website. However, the United States Congress wasn’t exactly welcoming of the fact that any idiot could print out a revered war medal, and the site was taken down.

There Was A Ton Of Farting

Rachel McAdams, who played Claire Cleary, had to smile, like all the time. We’re talking all day, everyday. To make her laughing and smiling as realistic as possible, Christopher Walken, who played her father, would keep saying the word “fart” to McAdams to get her to giggle just right. What a comedian.

It Boasted Some Political Powerhouses

At the Cleary wedding, Christopher Walken’s character, Secretary Cleary, is greeting some political elite in the receiving line. Among the powerhouses? Senator John McCain and Democratic political commentator James Carville.

There Was A Ton Of Improv

James Bond Was Wanted For The Sequel

Of the possibility of another Wedding Crashers film, director David Dobkin said, “We wanted Daniel Craig to be the ultimate wedding crasher, with his sexy body and his speedo, and the two guys would be incredibly threatened by him. He was like the next generation terminator of wedding crashing.” I’ll still hold out hope for that one!

There Was Some Actual Wedding Going On — Sort Of

In order to make sure that the weddings looked as real (and crashable) as possible, a real wedding planner was hired to keep all of the faux nuptials running shipshape.

Woodwind, the boat owned by the Cleary family, is an actual boat that’s available for rent. Based out of Annapolis, the movie used the boat as it was for filming — it’s still available for charter and public cruises today.

The Painting Was A Gift

The painting that Todd gave to Jeremy during their midnight rendezvous? It was a real painting, and Vaughn took the artwork home as a keepsake when filming on Wedding Crashers wrapped.