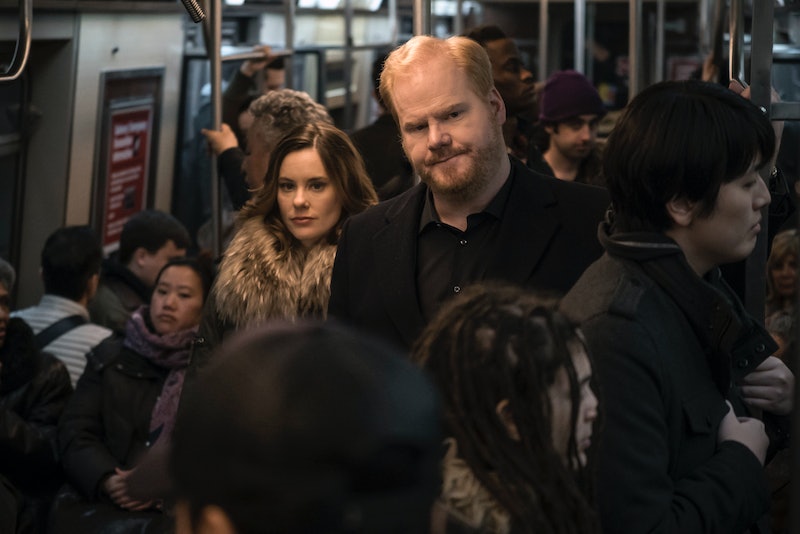 There is nothing new about a comedian turning his or her life into an eponymous sitcom. It's been done since the dawn of time, birthing mega-hits like Seinfeld and mega-flops like Mulaney alike. Now, TV Land is entering another into the genre: The Jim Gaffigan Show , which premieres on July 15. Comedians opening up their lives and flaws to public scrutiny isn't such a big deal — that's what comedians do. But when they base their sitcoms on their real lives, as Gaffigan is doing, they also have to drag their families into the mix. I'm sure they gave their blessings, but it can't be easy. So, before we're introduced to the fictional Jeannie, who is Jim Gaffigan's wife in real life?

It can get a little confusing, because Jeannie Noth Gaffigan, Jim's wife IRL, is an actress, but she doesn't play herself on TV. Instead, his wife on the show, playing the character named Jeannie Gaffigan, is played by Ashley Williams, who you probably know as Victoria the Baker Who Got Away from How I Met Your Mother (or from the J.C. Chandor movies like Margin Call and A Most Violent Year). Here, some things to know about the real Jeannie Gaffigan.

She's An Actress In Her Own Right

Her biggest role to date has been as Meredith, the wife of Andy, on TBS' My Boys. Andy was played by Jim Gaffigan. So, yes, they have played husband-and-wife on screen before, just not in the show about them actually being husband-and-wife. (Confused yet?)

She's actually one of the executive producers of The Jim Gaffigan Show, and also one of the credited writers. Married and working together seems like it'd make a tough gig, but Jeannie told BuzzFeed their process is remarkably conflict-free. "We’ve kind of gotten used to writing together over the years, because we started writing together pretty early on, because we’ve done all the stand-up specials together," she said. "I understand Jim’s point of view really well from his stand-up...Jim is an observational comedian and he’ll take something that we see every day and he’ll analyze it and find out all these things about it, and then I can add on to that point of view."

She's A Mom Of Five

Really — that's not just a conceit for the show, as surprising as that may sound for a couple living in New York City. In fact, when they were getting the show off the ground, Jeannie told AXS.com that one of the early showrunners found the size of their family to be too unbelievable for television. "They were like, “Four kids, that seems a little bit unrealistic,'” she said. "And we would say, 'But we do have four kids.' Then they would come back with, 'Yeah, but I really don't think that people are going to buy that you live in New York City with four kids.' In the meantime, I got pregnant again, so we had another kid." Mom of five! In New York City! Give her a medal of honor — I'm not even done gestating my first yet and it is exhausting.

She Was OK With Casting Herself

Jeannie told Channel Guide Magazine that she was happy to stay behind the camera this time around, because one of them had to stay behind-the-scenes and make sure their vision stayed intact, which would be too hard to do if they were both also memorizing lines and worried about performing. “It’s not going to be about money anymore," she said. "It’s going to be about creative fulfillment.” She liked Williams for the part because the actress came to her audition with a big, Mom-like backpack. Plus, Jim added in the same interview, “Ashley Williams could come at Jim with a machine gun and people would find it adorable. That’s very rare in an actress.” Don't get too excited—I don't think that's an actual plot point. (...Yet?)

She's The Brains Of The Operation

At least according to Jim. “Jeannie, she’s the smart one,” Jim told The Interrobang. “She’s the real deal.” Now that's how to make a marriage/working partnership last.