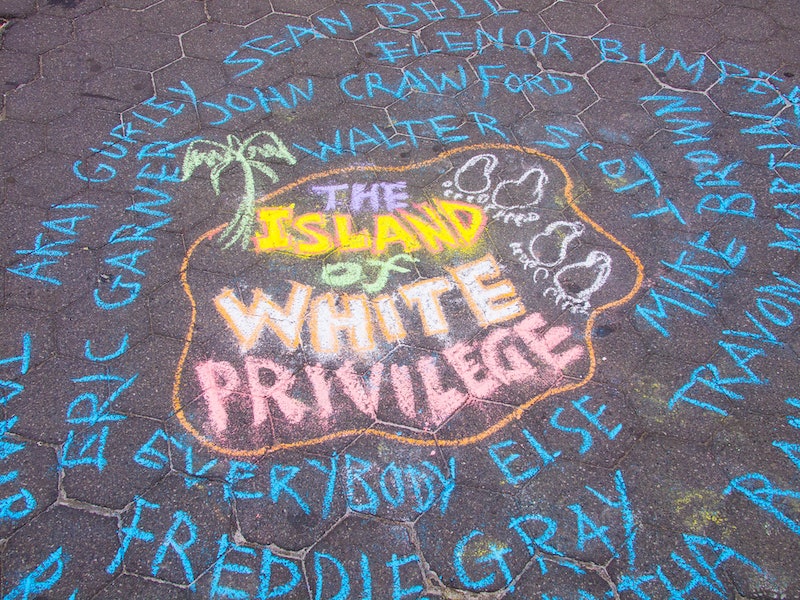 The buzzword "white privilege" gets thrown around a lot these days in different contexts. But usually, it refers to the ways white people in the United States benefit from centuries of oppression of people of color whether they like it or not — and, spoiler alert, they don't. Beyond simply disliking that people have been oppressed, white people hate admitting that white privilege exists. But why is it so hard to acknowledge that you benefit from the oppression of others through economic wealth, preferential treatment by police, government over-representation, and many other advantages? A recent study attempted to get to the bottom of why so many people continue to deny white privilege, even as they actively benefit from it.

Why is it so hard to admit to possessing white privilege? The authors suggest that white people deny their privilege because it threatens their image of themselves as good people who would never participate in a societal injustice. Unfortunately, though, we all participate, no matter how well-meaning we are, simply by possessing the money, education, and treatment we enjoy purely because we happened to be born with a particular skin tone.

I'll admit that when I first heard the time "white privilege," I doubted my possession of it for a different reason. Like many members of privileged groups, I was confused about what "privilege" meant, mistaking it to refer to one's general well-being. "I know black people who are happier with their lives than me," I thought. That's not what it means. The definition of "privilege" is "a special right, advantage, or immunity granted or available only to a particular person or group of people." It's also not about how happy your childhood was, like this white dude who decided to start an argument with me about "the white guilt thing" over OKCupid thinks:

If you're also on the fence as to whether you experience white privilege, the answer is that if you're a white American, you do. But don't take it from me; take it from these helpful resources that explain white privilege better than I could. Because it definitely exists, and it's far past time that we acknowledged it — and tried to change it.

In accessible, non-accusatory language, McIntosh offers examples of many types of privilege, including white privilege, male privilege, and heterosexual privilege, that wouldn't occur to many privileged groups — because not having to think about how privilege affects you is an example of privilege in of itself. For instance, she points out that Band-Aids are designed to match white people's skin. When McIntosh started writing about privilege in the '80s, she first sparked the discussion many of us are having today.

2. This list of everyday examples of white privilege from BuzzFeed

For those having trouble imagining what white privilege looks like, this article offers concrete examples like, "People will never label you a terrorist" and "Not having to worry about being stopped and frisked."

3. This Tumblr "resource post for all the Good White Person ™ s out there"

They didn't have to, but I'm very grateful Tumblr user vasundharaa put together these comprehensive lists of useful articles, hilariously categorized by what kind of thing the white person who needs to read them would say, including "Don’t blame me just because I’m white," "You are being racist against white people," and "I'm just appreciating your culture." Now, people who need to be educated about race don't need to risk offending people of color with these off-putting but common misunderstandings.

4. This comic about white privilege, but not this one.

Artist Jamie Knapp created a comic explaining white privilege to people who might deny they possess it, including a statistical breakdown of recipients of Bachelor's degrees, prison sentences, job offers, and media representations of homicides by race. For contrast (and laughs), check out this complete fail of a cartoon that aims to explain "white privilege in one simple image" but actually presents the most complicated image I've ever seen in my life (to be fair, it's from the satirical masterpiece that is Clickhole, but the point still stands).

If you've read everything I've recommended and are still thinking, "But white people are disadvantaged!" Dr. Robin DiAngelo has a theory as to why that might be. "We have organized society to reproduce and reinforce our racial interests and perspectives," he explains, so of course white people will have no trouble finding evidence that they're the oppressed ones if they want to. Furthermore, white people are considered the default group with no racial identity, so suggesting that their worldview is colored (no pun intended) by their race shatters their self-conception. Informing white people of their privilege assigns a race to people who have grown accustomed to and comfortable with having no race at all.

Since our society has found endless ways to justify the status quo, people may view all the resources I've just offered with a large dose of skepticism. Remember, the ability to ignore this information is a form of privilege in of itself. People of color have no choice but to face these harsh realities.