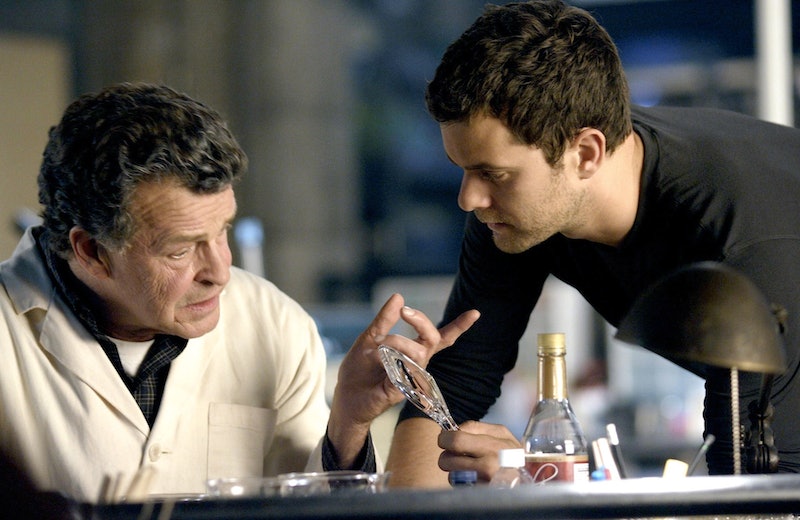 TV shows can give us a lot of things: action, mystery, comedy, tragedy, suspense, joy, and more. But every series has to have one very crucial ingredient if it hopes to connect with viewers, and that's well-written, well-acted, complex, unique characters. That's something J.J. Abrams knew when he created Lost; we would never have cared about the mysteries of the Island if they weren't shown to us through the lens of one of television's greatest ensembles. And that's something that many of Lost's knock-offs (FlashForward, The Event, V) forgot, concerning themselves with mystery over character, style over substance. There's a reason why Fox's Fringe was the most successful, most critically-acclaimed, and longest-running sci-fi show to premiere in the wake of Lost's impact: it introduced audiences to one of the greatest relationships in television history. And no, I'm not talking about the romance between Olivia Dunham and Peter Bishop — but rather, the complicated dynamic between Peter and his father, Walter Bishop.

When Fringe debuted in in 2008, many comparisons were drawn between Fox's new sci-fi series and the network's own iconic, long-running X-Files: both shows revolved around FBI agents investigating strange paranormal cases, with monster-of-the-week episodes that gradually built a larger mythology. Peter and Olivia were the new Mulder and Scully, with will-they-won't-they tension running throughout several seasons. But while the older series was wholly focused on that one relationship, Fringe added in the small wrinkle of a third party: mad scientist Walter Bishop, played so memorably by John Noble.

Of course, adding a third character into the mix doesn't just double the number of core relationships; it triples them, turning a straight line into a triangle. One side of that triangle was the slow-budding love between the determined FBI agent and the sarcastic younger Bishop. Another was the relationship between Olivia and Walter, which grew increasingly fraught as she uncovered more of the truth about the experiments the scientist had conducted on her in her youth. But the third — and ultimately the most important — side of the triangle was the bond between Walter and Peter. (Of course, you could argue that there was a fourth relationship at play, which was the one shared by all three of the leads simultaneously, creating a lovably mismatched makeshift family.)

The delicate father/son relationship is frequent fodder for feature films, lying at the root of such wide-ranging classics as The Godfather, Star Wars, The Lion King, and Big Fish. It's no coincidence that UC-Berkeley scientists determined conclusively that the "saddest movie scene ever" was the end of 1979's The Champ, where young Ricky Schroder weeps over his father's lifeless body. And considering that many of those films moved us to tears in 120 short minutes, imagine what someone could do with 100 episodes stretched across five seasons.

When we first met Walter and Peter in the pilot, they hadn't spoken to each other in years. Papa Bishop had spent the past 17 years locked away in a mental institution, following the death of his lab assistant. Throughout that same time, his son Peter lived a nomadic existence, dropping out of high school, briefly teaching college chemistry with a falsified degree from MIT, and generally hating his strange, distant father. When Olivia needed a family member to check Walter out of the institution, the estranged pair were finally forced to face each other again. And so began a long, slow road to repairing their fractured relationship.

Over the course of five seasons, viewers began to piece together the backstory of Walter and Peter. When he was very young, Peter contracted an incurable illness, and although Walter was finally able to synthesize a cure, he was too late: his son had already died. So he built a window that allowed him to gaze into a parallel universe, where an alternate Walter (dubbed Walternate by fans) was working on a similar cure for his similarly-ailing son. But Walternate was distracted at a critical moment, and failed to recognize that he had successfully synthesized the cure.

Desperate to save this other Peter since he couldn't save his own, Walter built a doorway into the parallel universe and brought Walternate's son into our world. Unbeknownst to Walter, this transgression of space-time had destabilized both universes, leading to what would become known as The Pattern... and ultimately to war between the two worlds, as Walternate tried to heal his broken universe and find his missing son.

Of course, the revelation of this truth would initially drive a deeper wedge between Walter and Peter, as the knowledge that he'd been kidnapped from a parallel universe came as a bit of a shock to the younger Bishop, to put it mildly. Sure, Walter probably should have put alterna-Peter back where he found him after curing his illness... but how could he, after his grieving wife had seen the specter of her dead son, miraculously restored to life? Eventually Peter was able to understand and forgive Walter, and the two grew closer and closer over the years.

Interestingly, Walter's fierce love for his only child was both his fatal flaw and and his greatest strength. It's both the inciting incident of the series (Walter's decision to take a child that wasn't his, leading to extra-dimensional warfare) and its denouement (Walter's decision to sacrifice himself in order to save our universe — and, more specifically, his son — from the tyrannical Observers). Walter literally ripped apart the fabric of space-time in order to save his son; he then willingly walked through a wormhole, erasing himself from history via intentional paradox, in order to ensure his son's happiness. It's appropriate for a show as quirky as Fringe that the grandest romantic gestures in the series weren't delivered between the two young, attractive leads, but from an aging father to his adult son.

Lost (which was also created by J.J. Abrams) was Fringe's spiritual predecessor in many ways — not the least of which was the prevalence of daddy issues. But while those issues were mostly used on Lost as psychological fodder for flashbacks and rarely (if ever) happily resolved, the father/son relationships on Fringe were the entire point of the show. Walter and Peter; Walternate and Peter; Peter and Etta; September and Michael; the Observers and all of humanity... The examples of fatherhood were varied and abundant throughout the series. If the Observers' strict patriarchy was the doom of humankind, then Walter's simple love for his son — and his willingness to forfeit his own future for Peter's — was its savior.

Just try to watch this conversation between Walter and Peter in Fringe's series finale without shedding a tear:

Or this emotional farewell:

If your eyes are dry right now, you must be as heartless as the Observers. It took 100 episodes for Peter Bishop to say the four words Walter had always longed to hear: "I love you, Dad." And when they finally came, Walter couldn't even hear them over the roar of the destiny-altering portal he was about to vanish into. All Walter could do was smile, turn around, and walk through the wormhole. The man who had made so many morally grey decisions throughout his life could rest easy, knowing that he was finally, unambiguously, making the right one. Talk about a bittersweet ending.

How John Noble was never nominated for an Emmy for this role, I'll never know. He deserved every trophy in the world for this line alone:"You are my favorite thing, Peter. My very favorite thing." Now excuse me while I go sob into my Red Vines.