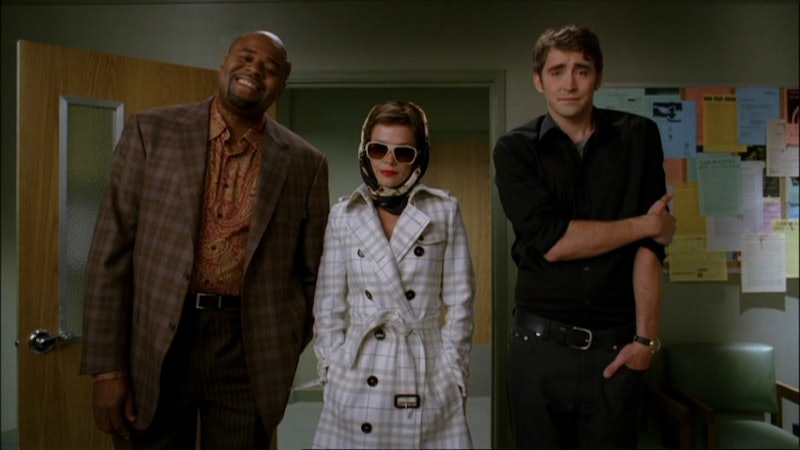 A few months ago, my roommate commented on how attractive Lee Pace was in Halt and Catch Fire and I suggested she watch Pushing Daisies, the unfairly canceled ABC series that introduced me to the actor. However, I had forgotten a key element to the show, so imagine my internal laughter when she next asked if there were any sex scenes. While they're one of my favorite ships of all time, Ned and Chuck can't actually touch on Pushing Daisies. The piemaker brought his childhood sweetheart Charlotte "Chuck" Charles back to life using his magical ability, but the catch is that if he ever touches her again, she'll be dead again forever.

Whoops! The two did get with the smooching in a few fantasy or dream sequences over the show's two seasons, but to be honest, we didn't need it. The writers are both smart and creative. They managed to create an adorable couple while avoiding direct physical contact altogether. Fans of Hannibal (which was adapted for television by Pushing Daisies creator Bryan Fuller) might draw comparisons between the shows aesthetic styles, especially when it comes to creative murder scenes. However, delightfully complicated relationships are another thing these shows have in common.

Want to relive the glory days, or help convince a friend to give the series a shot after all those years? Here are some of the best moments where Pushing Daisies gave you all the Ned/Chuck feels without any touching at all.

The Side By Side Hand Hold

They're way into hand holding on Pushing Daisies.

The Time They Used Emerson

The Time They Engineered This Car

Ned installed a glass panel in his car so that he and Chuck wouldn't accidentally bump each other, but also included this mechanism for "steering emergencies." In the words of the Pushing Daisies coroner, "Mmmhm." They made one of these for Ned's bedroom as well. Can Netflix or Showtime revive this show please? Thanks.

Only Pushing Daisies could make this not creepy.

The Time Chuck's Hobby Was A Lifesaver

I wouldn't think a beekeeping suit was particularly attractive, but it allowed Ned and Chuck to get closer than ever!

The Time There Was Safety In Utensils

When you make pies for a living, how can two lovebirds avoid adorable feeding each other?

There's a scene in the first season with the two of them just dancing around Ned's apartment and narrowly avoiding one another. It's precious.

This is from the show's pilot, proving that they were always on point.

The Best High Five Ever

I mean seriously, could they be any cuter?

Everyone's favorite! Not only is this super cute, it's also terrifying. How porous is that plastic? What if it tears? I've never been so tense watching an OTP kiss in my life.