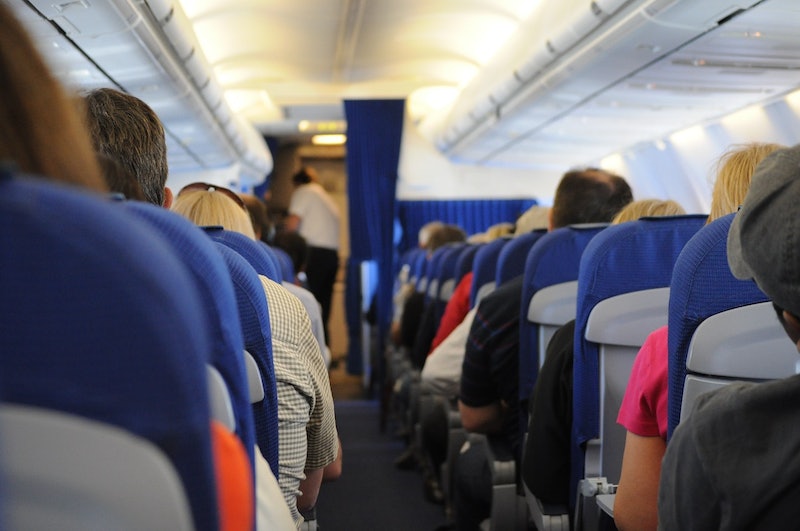 Thanks to UK businessman, Richard Lloyd, you can finally fulfill all your sex-in-a-plane bathroom fantasies just by downloading his appropriately named dating app, “MileHi.” Although the app doesn’t come out and say, “We are here to get you laid while you’re on a plane,” and actually focuses on being an app that connects people for other reasons, the name says it all. We are not naïve, Lloyd; we see what you’re doing there. Besides who doesn’t want to get it on in a space that’s roughly two feet by three feet? Sounds like the idea place to me.

Although new to the bazillions of apps out there (it was launched just this week), the app is already being called the “Tinder of the sky,” because of course it is. Members get to see who’s on their flight, connect, message, and even sit next to each other so they can have sex in the bathroom, er, I mean, chat about politics, the Greece bailout, and even more important stuff.

Having met his now-wife (and model, obviously), at Heathrow airport back in 1995, Lloyd realized that every time you travel there are connections to be made.

"This is a business tool aimed at making life easier for those wanting to share a cab perhaps into a city or find out who on the flight is going to the same conference as you," Lloyd told the DailyMail, "But I’m sure there will be some who find it perfect for networking in a social way, all with the best intentions of course. MileHi by name but very much saying hi by nature."

As is the case with all these apps, Lloyd’s brainchild isn’t the first of its kind. Here are five other apps for people looking to get frisky while traveling.

In November of 2014, Tripr, a dating app for people on trips (creative name, no?), was launched to bring travelers together. But unlike MileHi, which seems to be something for all travelers, Tripr is geared toward people who are more about actual vacations, like backpacking, and connects them. Similar to Tinder, because Tinder has become the standard to which all dating apps are compared, you can scroll through and either accept or deny potential travel buddies.

Uh-oh! Looks Mr. Lloyd has some competition in Wingman! Long before MileHi joined the dating app club, there was Wingman, an app to connect people on flights, too. As is the case with most of the dating apps currently out there, Wingman also uses the swipe technique so passengers can choose who’s their cup of tea for some in-air fun, or who is not.

While it may not be about trying to get you some action on a plane, MissTravel is an app that allows you to propose trips with other people. You can either meet up with fellow members to travel together, have a member come to where your are, or there’s the option called, “show me your town,” in which you can travel to someone else’s town… because it’s always super smart to up and take off to a stranger’s home, right?

The app HelloTel connects people at the same hotel when they’re traveling. It’s meant for both finding a buddy or a hook-up. All you have to do is check-in to the hotel via the app, create a profile, and see if there’s anybody else staying there. Although, considering all the hotels in the world, I can’t imagine the likelihood of finding someone who’s staying at your exact hotel is a guarantee, but I guess, to cover all your bases, you can check-in to a bunch of hotels via the app.

Not only does TravBuddy connect travelers, but it’s also helpful enough to even give recommendations for hotels, tourist spots, and traveling in general. When you’re a member you can search for fellow travelers by location, travel dates, and of course, gender, and age. Basically, you can keep fellow members abreast of your travels and if there’s a match (and you’re into each other), you can meet up.

More like this
The 3 Best Heated Steering Wheel Covers
By Margeaux Baulch Klein
12 Aphrodisiac Desserts To Spice Up Your Valentine’s Day
By Kaitlyn Wylde
TikTok's Voluntary Celibacy Trend Has Sparked A Movement
By Lexi Inks
Ashamed Of Your Screen Time Stats? Here's How To Change That
By Alexis Morillo
Get Even More From Bustle — Sign Up For The Newsletter
From hair trends to relationship advice, our daily newsletter has everything you need to sound like a person who’s on TikTok, even if you aren’t.