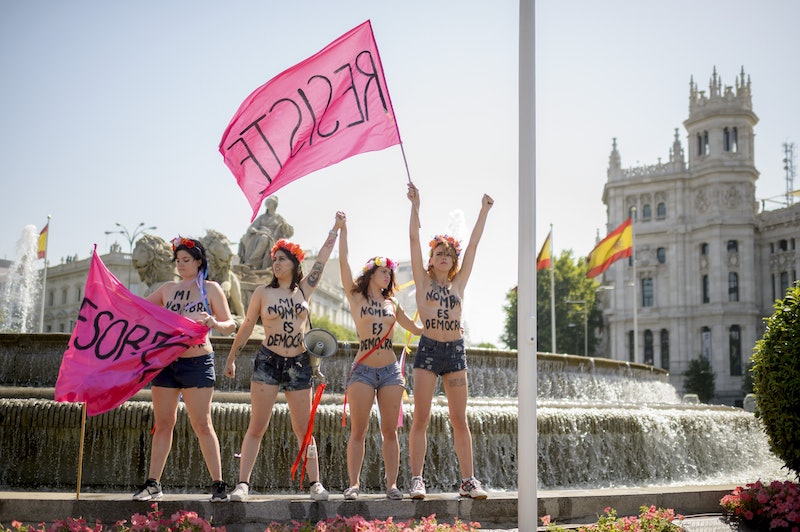 When you're a hardcore activist, it can be hard to make sure you're following all the right things. Sometimes, we get swept away in the causes that affect us the most. It's wonderful to be enthusiastic about a particular problem. Some feminists are most passionate about reproductive rights. Others care most about discrimination. But it's great to be an open advocate for any important mission because there really are so many other amazing causes that all feminists should get behind.

If you are a feminist, you are probably all for empowerment and equality for anyone who's disadvantaged by society. But so many people fall under that umbrella, and the problems plaguing people in other countries or who don't look like us are just important. Patriarchal societies hurt women — and members of minority communities — in uncountable ways. You might not have time to protest or write your representatives about them all, but it's always good to be aware of injustice and informed enough to talk to others about it.

So if your Feminist Student Union has a lot of woman-power to spare but not much direction on which cause to benefit, here are nine issues that could use some of your attention.

Discrimination of any sort is harmful. Women, minorities, members of the the LGBTQ community, people with disabilities, and more are discriminated for all kinds of opportunities such as housing and employment, etc. Feminists can be a powerful force in combating discrimination against everyone because women face it so frequently.

The economic oppression affects so many people around the country. You could try campaigning for fair pay, paid family leave, fair scheduling, affordable child care, and earned sick days. A shortage of these things put women behind in the workplace, and a few well-timed protests and petitions could put a crack in the glass ceiling.

All feminists should support equality, and police brutality has been a horrifying topic in the news for some time. This last year, protests broke out across the country that showed how angry the public was regarding the death of Michael Brown and other similar incidents. Feminists can continue to join the ranks of people who agree that black lives matter.

Campus rape is an epidemic in colleges and universities across the country. Young activists are primed to tell their schools they denounce victim blaming, a lack of justice for perpetrators, and administrations that are more concerned with protecting the college's image than the victim.

All rape deserves protest, but if you want to get involved in a specific cause, you could protest sexual assault in the military. A woman serving in the military is more likely to be raped than killed in action, according to ABC News, and often braves post-traumatic stress disorder. Because of the way the military's justice system is set up, the person with the power to punish a perpetrator might be his or her commanding officer, which complicate personal and professional relationships. Women who come forward often risk losing their military careers.

The empowerment of girls is crucial both in the United States and in the global community. You can support organizations that make sure girls have access to education, protects them from the threats of their environments, and encourages their goals for the future.

Becoming A Corporate Or Political Leader

It can be so difficult for women to make it far in the corporate and political worlds. Sometimes, men do not want to mentor women, and aspiring female leaders don't have as many women to look up to and emulate. You could help alleviate this problem — and make some connections for yourself — by starting or getting involved in a mentoring program or women's leadership conference.

Human trafficking is a severe human rights violation, whether it's migrant workers being taken advantage of or the worldwide sex trade. According to the U.N., "at any given time, an estimated 2.5 million people are trapped in modern-day slavery." This tragedy has to be seriously addressed, and feminists are the perfect people to take it on.

Domestic violence affects virtually every community, and women's shelters almost always need help. Give back by volunteering at one of them or organizing a fundraising event. One in three women and one in four men will be abused by an intimate partner sometime in their lifetime, and in the United States, 10 million people face this violence every year, according to the National Coalition Against Domestic Violence.

These causes are all so crucial for the United States and the global community. Feminists can raise their voices for them and achieve more equality than ever before.

More like this
24 History-Making Black Women You Probably Didn't Learn About In School
By Ayana Lage and JR Thorpe
25 Inspiring Quotes From Black Women To Celebrate Black History Month
By Kyli Rodriguez-Cayro and JR Thorpe
Twitter Is Identifying With Sally Field & Jane Fonda’s Friendship In New Viral Video
By Jake Viswanath
6 Organizations Fighting Police Brutality That You Can Support Right Now
By Syeda Khaula Saad and JR Thorpe
Get Even More From Bustle — Sign Up For The Newsletter
From hair trends to relationship advice, our daily newsletter has everything you need to sound like a person who’s on TikTok, even if you aren’t.