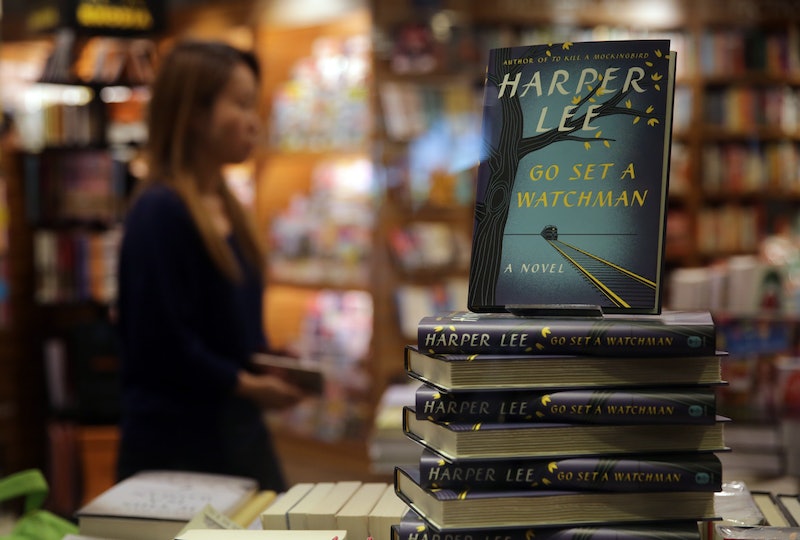 The world is just more than 24 hours out from the record-breaking release of Harper Lee's Go Set A Watchman , and the Internet is abuzz with equal parts celebration, outrage, and a whole lot of memes. (Seriously, go look at all those memes on Goodreads.) 55 long years after the iconic To Kill A Mockingbird tugged at our heartstrings and made us see the world a little differently, readers return to Maycomb County, finding the setting and its inhabitants a little different than we all remembered.

I grew up in a house with many copies of To Kill A Mockingbird — more copies than readers. It was, and is, my mother’s favorite book; for reasons I suspect that have less to do with the novel’s groundbreaking racial and political commentary, and more to do with the fact that Atticus Finch reminds her so specifically of the man her own father was. That’s why To Kill A Mockingbird has stood the test of time: because in the novel the political is personal, and the personal is so very universal. That's also why readers can't stop talking about it.

Readers have always recognized themselves, and their own lives, among the pages of Harper Lee’s Pulitzer Prize-winning novel. Whether the politics of the day concerned civil rights or, 50-some years later, marriage equality, what has always remained the same is the novel’s capacity to speak to longings that are so inherently human: for equality and justice, for a hero, for unambiguous goodness.

I suppose we really couldn’t help but set the bar for Go Set A Watchman unattainably high — and maybe that’s OK. You really can’t argue with the fact that, love it or hate it, it has readers talking about really important issues, at a time when, at least in the U.S., our country is becoming both more, and in some ways less, equal for all. And I think, novel-worthy or not, that’s a really, really great thing.

Here are some readers first impressions of Go Set A Watchman :

The Writer Standing by His Fellow Author

The Guy Who's Definitely Not Impressed

This book is the literary equivalent of those reunion episodes of Entertainment Tonight. The whole cast of some old sitcom get together and you just spend the whole time thinking about how old everybody looks.—Barry Pierce, Goodreads

The Person Who's Already Over It

The One That Might Bring a Small Tear to Your Eye

Some symbols are here to stay. Some things are meant to remain the way they are. Some things should remain pure. The memory of To Kill a Mockingbird and that of Atticus Finch should be one of them. I wish this book had been left to rot as an old, forgotten manuscript in some long-forgotten warehouse. I want to remember Atticus Finch as a paragon. Sometimes, I want simplicity, and I want bliss in ignorance.—Khanh, Goodreads

The Person Who Formed His Opinion Before Reading the Book

The Reader Who Pretty Much Sums it Up Perfectly

If "Go Set a Watchman" had been published before "To Kill a Mockingbird," it would have been meaningless. Tom Robinson's trial would be just a vague incident in the Jean Louise's memory instead of a culturally iconic scene. Atticus Finch would be his daughter's fallen hero, but not ours. If "Watchman" had been first, we would only know Atticus as a segregationist and we wouldn't care: he wouldn't have been an ethical role model and a hero. Now, though, Jean Louise's feelings of betrayal are our own… That's why "Watchman" works [because it] is about fallen idols and disillusionment.—Arielle Davinger, Amazon

Seriously though, that was one amazing ham costume.

More like this
'Bridgerton' S3 Teases Exciting Social Season For Penelope Featherington
By Bustle
‘The Mosquito Coast’ Book Ending Includes A Major Character’s Death
By Brad Witter
The 'Firefly Lane' Book Ending Teases Way More Tears To Come In 2023
By K.W. Colyard
The 'Lady Chatterley's Lover' Book Leaves Us With A Troubling Question
By Catharina Cheung
Get Even More From Bustle — Sign Up For The Newsletter