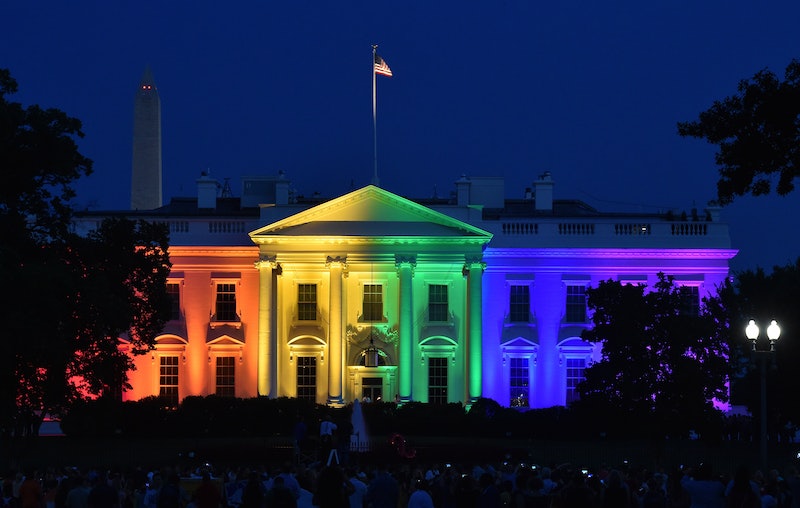 If you doubted for one second how the Obama administration feels about the gay marriage ruling, doubt no longer: On Friday night, the White House was lit up in rainbow colors. No, really. It's not that you're just looking at a photo of the White House through your rainbow-colored pride glasses, this is for real. After the Supreme Court ruled Friday morning that the same-sex marriage ban was unconstitutional, effectively making gay marriage legal in all 50 states, most of the nation erupted in cheers. President Obama was thrilled. Hillary Clinton was thrilled. Liberals looking for a great reason to day drink were thrilled. June 26 marks a historic day for equality, and the White House, literally, the house itself, didn't want to miss out on any of the fun.

And 1600 Pennsylvania isn't the only national landmark celebrating with a ROYGBIV makeover. New York City's Empire State Building got in on the action, as did Niagara Falls. And the clouds over Los Angeles decided Friday was a good day to include rainbows, too. Sure, it's a "natural occurring weather phenomenon" but, wink wink, we all know that love wins, and that those LA cloud rainbows are the result of our collective souls bursting with joy. That, or Joan Rivers ordered it be so from on high. Check out the gorgeous pics.

It's kind of framed with a heart, you guys.

And the Freedom Tower.

All these gifts of exterior illumination are sure to make Ruth Bader Ginsburg, and Clark W. Griswold, very proud.