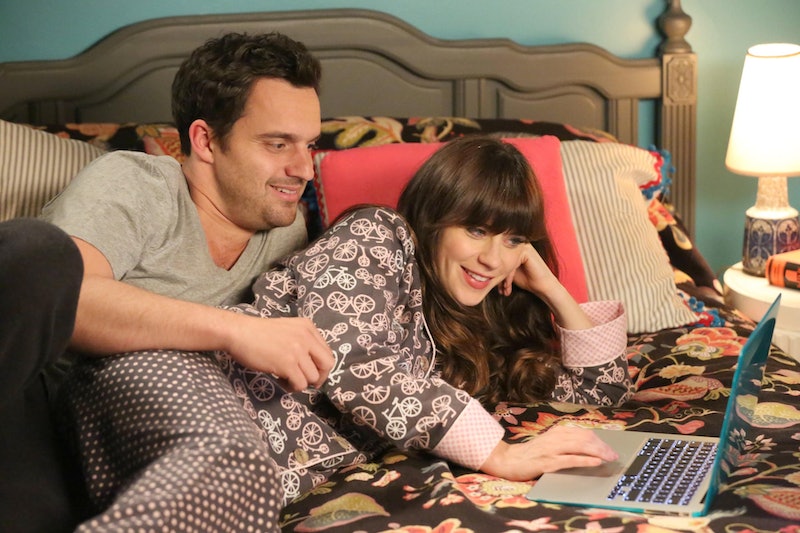 Confession: I am a New Girl fan and I unabashedly love Nick & Jess in the little bicycle print cocoon they've weaved around themselves. Apparently, this is an unpopular opinion outside of the realms in which shipper Tumblrs flow like currency. Popular opinion tells me they're supposed to be annoying. It's supposed to drive me crazy that they solve all their problems by talking it out. It's supposed to make me nuts that in Season 3 the couple we shipped is together, happily, for more than a few episodes. But Nick & Jess are kind of amazing, and I don't care who knows it.

Sure, there are issues. These two appear to spend every waking moment together. As Coach continually (obnoxiously) points out, Nick is taking on some of Jess' traits. And yeah, they're already living together which is pretty precarious for any new relationship. But these elements only seem to provide temporary problems, rather than sweeping, entirely dramatic ones. Nick & Jess can just be, like a couple formed in real life. And just as in real life, some of their friends (i.e. fans) will take issue with the way in which they come together and choose to spend their time with each other. That's natural.

And sure, while the taming of a wild boy like Nick is sort of a fantasy in and of itself (as is finding the perfect match literally without having to leave your house), what we're left with is something surprisingly normal. Even when Jess gets upset about Nick balking at the boyfriend label and brings Taye Diggs home by accident, there isn't much of a sense of dread. We knew Nick wouldn't break up with her because some hot weirdo followed her home, because for once, New Girl doesn't have that dramatic, soap opera-esque element that seems to be a requisite for a comedy these days.

We're not waiting nervously for this adorable relationship to crumble, knowing that the sitcom clock is running, because when these two get together, it's actually funny. I think back to the quintessential will-they-won't-they couple, Ross and Rachel on Friends. When they finally got together, their road was fraught with troubles. Not long after getting together, their relationship is hit with Ross' jealousy over Rachel's co-worker Mark, which lasts for eons in sitcom time. But that sort of interruption becomes the norm in sitcom land. If a couple is together for any real amount of time, we have to be sitting on an exponentially growing pile of pins and needles the whole time. We have to know that anything could come between them at a moment's notice.

It doesn't feel that way with Nick and Jess. It feels lovely and exploratory and right. It's like they're both experiencing their first great relationship and they're wide-eyed and open to everything and we're along for that ride.

What's more, is that by taking the incoming breakup pressure off of the couple, we're able to focus on the thing that originally made New Girl so much more than The Zooey Deschanel Show: the ensemble. Story line complaints aside (Coach and CeCe, are you kidding me?), when we're not waiting for the other relationship shoe to drop, we can have our cake and eat it too. We get the romantic satisfaction of two dopey little Los Angelians in pre-love and the antics of their best friends, leading to the most recent episode that gave us the perfect set of Thanksgiving hijinks.

New Girl couldn't have returned to a place where the Nick and Jess question could give way to pure comedy if it broke them up or threw them a little trouble in paradise curve ball. (Just look at all the drama between CeCe and Schmidt over the past year.) The level to which both Nick and Jess' hearts would shatter over a break-up would consume the series. It would be all anything was about. With them coupled up, we found time to get Winston an ugly-cute cat, Ferguson. We've watched Schmidt spiral downwards, then grow, then spiral a little more before growing a wee bit again. There was room to reintroduce Coach properly without just having him suddenly hanging around all the time. And one would hope, there will eventually be time to give CeCe more of a character than "best friend who Jess' roommates all want to date."

There seems to be a great aversion to coupling up a series' main romantic duo. Fans tends to get bored with no romantic connection to root for on an episodic basis — just look at Jim and Pam after they got married on The Office. People cried "blah" until Pam had a could-be tryst with the boom guy from the documentary crew. But romantic entanglement isn't what makes a sitcom good, it's the relationships among everyone in the ensemble — and the ability to turn those relationships into hilarity — that matter. Romance is a great hook for fickle viewers (and networks love it), but it's really not necessary to maintain a great, hilarious series (hello, It's Always Sunny in Philadelphia).

That being said, story is still important on New Girl, and there will be bigger issues for Nick and Jess ahead for sure. But there's nothing wrong with taking a beat and enjoying their togetherness now. Because despite our ingrained need to break them up according to sitcom law, they're actually working out kind of perfectly any way you slice it.