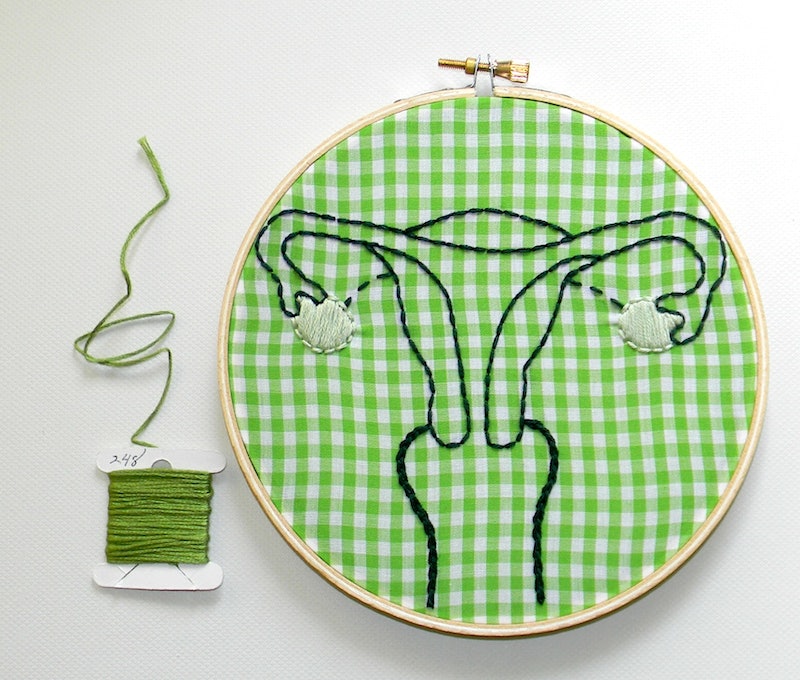 IUDs (intrauterine devices) are officially making their comeback. Back in the '70s, they had a bad rap — there was high risk for pelvic infections and infertility. But now, IUDs are safer and easier to obtain than ever. Dr. Stephanie Teal, professor obstetrics and gynecology at the University of Colorado, says there has been a recent explosion of interest in IUDs across the country. Between 2008 and 2012, Planned Parenthood saw a 75 percent spike in IUD use among their patients. Today, nearly four million women in the United States have chosen an IUD as their preferred form of birth control.

The IUD is a small, flexible T-shaped device inserted into your uterus by your doctor. There are currently two kinds available to women in the United States: the Mirena and the Paragard, also commonly known as the copper IUD. The Mirena contains low levels of progesterone, which thins the womb lining and prevents the egg from staying, while the small amount of copper in the hormone-free Paragard acts as spermicide.

If you're trying to choose between one or the other, it's important to know the benefits of both types of IUDs. Personally, I'm Team Paragard. I had one inserted in 2013 and it has by far been the easiest form of contraception I've ever gotten my hands on. And I'm not alone: 99 percent of the women who use Paragard also report being fully satisfied with it.

Know, however, that there is a possibility your periods will be heavier and crampier for the first few months, but for most women, they soon subside. Other than that, it's a pretty fantastic birth control options. Read on for the top five benefits of joining Team Paragard.

Less than 1 out of 100 women using the Paragard will get pregnant this year. It's just as effective as permanent sterilization, but your ability to get pregnant isn't affected should you decide to remove it. According to a 2013 poll taken by the American College of Obstetricians and Gynecologists, American OBGYNs are three times more likely to choose an IUD for themselves than any other birth control.

In fact, the Paragard's effects are so immediate, it can be used as emergency contraception up to 120 hours after unprotected sex. Compare that to the Mirena — it has to be inserted at a particular time in your menstrual cycle to do its job right away, or else you need to wait seven days for it to kick in.

The Paragard is the only longterm, reversible birth control option that contains no hormones. As we're seeing more individuals experience heart attacks, blood clots, or pulmonary embolisms from the estrogen and progesterone found in the pill and other similar products, the Paragard is a much needed product.

I suffered a serious pulmonary embolism when I was only 20 from the NuvaRing, and I'll never be able to use hormonal birth control again. For women like me, this IUD is pretty much the only option, unless we want to spend the rest of our lives buying condoms. Now, we can sleep soundly at night knowing we are preventing unwanted pregnancy and protecting our bodies at the same time.

3. Your Skin, Mood, And Sex Drive Won't Be Affected

Sure, the pill helps some women's skin, but any time you put extra estrogen or progesterone into your body, there is a chance things get out of whack. You might break out with some unfriendly zits at an inopportune time; you could get uncharacteristically snappy when your period begins to approach. They're small changes that aren't the end of the world, but they're there.

Nurse practitioner Ginny Cassidy-Brinn from Seattle, Washington notes that some of the most common side effects of the low levels of hormones in the Mirena include moodiness, acne, weight gain, and even decrease in sex drive. You don't have to concern yourself with any of these, though, because the Paragard doesn't leave any hormones lying around.

4. It Lasts The Longest

The implant is good for three years and the Mirena performs its duty for five. But the Paragard trumps them all — it can stay safely in your body for a decade. Some doctors report it can be used for up to 12 years. This is great for the group of females who don't plan on having a family anytime soon. And once it's in, it's in. No need to worry about upkeep or check-ups.

Plus, it can be removed at any time without risk. The best time to have your gynecologist remove it is during your menstrual cycle because your cervix is already naturally dilated. But if you can't make it in that week, no problem; your doc can give you mild medication to soften the cervix.

5. It's The Cheapest Contraception Out There

IUDs are the least expensive, most cost-effective forms of birth control available to women today. You pay a single amount for the following: the medical exam, the IUD, and the insertion process. Even if you include follow-up visits to your healthcare provider, you will pay between $0 and $1000, depending on what insurance you have.

Planned Parenthood is a good option; they do their best to make birth control affordable to women, regardless of income or demographic. And you never have to worry about getting your prescription refilled. The Paragard costs less than than the Mirena — and don't forget the fact that the copper IUD lasts nearly twice as long as the Mirena. It's truly the cheapest way to avoid pregnancy.

More like this
Hinge's New NFAQ Feature Is Demystifying Queer Dating
By Emma Carey
The Best Time To Date After A Breakup, According To Experts
By Bustle Editors
Why Experts Say Sleeping With A Fan On Isn’t Totally Risk-Free
By Sophie McEvoy
The 4 Key Benefits Of The Apple Cider Vinegar Supplements
By Carolyn Steber
Get Even More From Bustle — Sign Up For The Newsletter