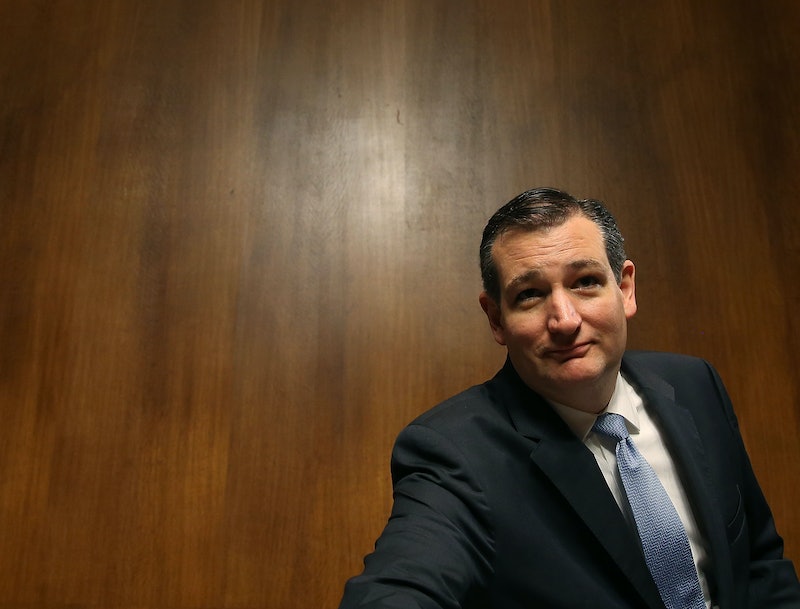 After his public battle with the newspaper — and likely because of it — Ted Cruz's memoir A Time for Truth has made The New York Times best seller list. Cruz's A Time for Truth will "debut" at No. 7 on the list for hardcover nonfiction using sales data for its second week on the shelves. Despite selling enough copies to debut at No. 3 week one, with 11,854 copies, A Time for Truth was left off the Times' famous list last week, angering Republican presidential candidate Cruz into calling out the list for "obvious partisan bias."

"This week's NYT best seller list was arrived at using the same process as last week's — and the week before that," Eileen Murphy, a Times spokesperson, told Politico in a statement. "That process involves a careful analysis of data, and is not influenced in any way by the content of a book, or by pressure from publishers or book sellers."

Murphy explained last week that there are "uniform standards" for determining the best seller list and Cruz's memoir's book sales were driven by "strategic bulk purchases," black balling it from making the list. However, the battle escalated when major retailer Amazon disputed these claims and put A Time for Truth at No. 13 on its own best seller list. The book's publisher HarperCollins and retailer Barnes & Noble joined Amazon's side, countering the Times' claims of bulk purchasing.

Cruz campaign spokesperson Rick Tyler released a statement to Politico and has publicly asked the Times to apologize and offer methodology transparency:

What’s transpired at the New York Times in the last two weeks raises troubling questions that should concern any author. The Times’ position has been disputed by a major publishing house, and by the two largest booksellers in the nation (Amazon and Barnes & Noble.) The New York Times has a responsibility to authors and readers to have the Public Editor Margaret Sullivan examine its methodology — and I join others in calling for the Times to do just that.

The Times, however, has stood by its original claim:

Our approach serves Times readers by authenticating broadly popular books through the confidential reporting of a wide range of retailers. In order to avoid compromising that process, we do not disclose who reports sales to us.

It seems Cruz's fight with the best seller list has only amped up its popularity, but we'll see where his memoir stands on the list in the weeks to come.