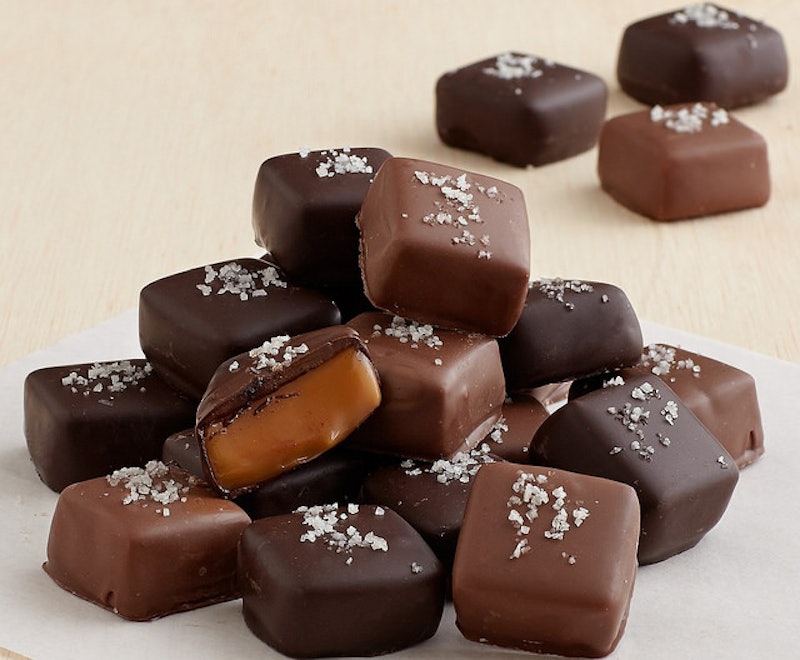 If you're looking for the secret to the best-tasting chocolate, science may have found the answer for you: A new Belgian study found that chocolate made with beer yeast somehow tastes even more amazing that regular chocolate does. Microbial fermentation, you see, is hugely important to making good tasting, high-quality items like cheese, alcohol, and of course, chocolate — which is why many of these industries have gone from using spontaneous yeast production that wasn't controlled to using starter cultures, which produce the same results with consistency in the products. But, the chocolate industry isn't one of the microbial dependent industries who has converted to using starter cultures and is consequently reliant on whatever microbial cultures exist from cocoa farm to cocoa farm.

Since different microbes create different flavors of chocolate, each individual harvester creates a distinct flavor and quality that is unique to their specific farm. But, this isn't always a good thing, since some of these distinct flavors don't taste good. "Some microbes produce bad aromas that enter into the beans, giving rise to chocolate with a foul taste, while others do not fully consume the pulp, making the resulting beans difficult to process," lead researcher Dr. Kevin Verstrepen stated in a press release. That's why Verstrepen decided to conduct a study to see what the best microbes were, in order to work towards creating a universally higher standard of chocolate quality.

In the study, the research team documented more than 1,000 different strains of microbes, most of which were used to ferment alcohol like beer and wine. They then took the best of the best and cross-bred them to try to find the most out-of-this-world combination possible.These hybrids were then used to create new flavors of chocolate, with the chocolatier Barry-Callebaut producing the treats made from each strain.

Next, the tastes were studied in a private taste testing, which resulted in a unanimous vote of the flavor derived from the cross-breeding fermentation. So now, the chocolates made with the cross-bred alcohol fermenting yeast will be entering commercial production via Barry-Callebaut. The possibilities are endless, though; as Verstrepen told Medical Daily, it should now be "possible to create a whole range of specialty chocolates to match everyone's favorite flavor."

How cool is this? This new discovery is making chocolate even more delicious than it already was, and let's face it: Chocolate has always been pretty darn tasty. Not only that, but this isn't the only scientific advancement to have come out recently geared towards boosting up chocolate's already impressive yum factor. Here are four other ways our favorite dessert is getting even better:

Chocolate on its own is already has a lot of health benefits if eaten in moderation; however, a study released earlier this year from the National Meeting and Exposition of the American Chemical Society found that changing the way we make chocolate can retain some of the nutritional benefits of cocoa in it that are often lost in the current chocolate-making process. Roasting cocoa beans for chocolate at a lower temperature for a longer period of time resulted in enhancing the antioxidants present in the beans, making them healthier.

Scientists found another way to make chocolate taste better, with the discovery of a specific genome sequence from Criollo trees that results in some phenomenal tasting chocolate. Through the use of the Criollo trees' genomes, they found the specific genetic components that influence flavonoid, antioxidant, pigment, and aroma production. From there, they could manipulate all chocolate into an amazing-tasting treat.

Melting chocolate is a common problem of chocolate lovers, but researchers from Barry Callebaut AG (the same chocolate producers who aided in this study!) found a way to make chocolate heat resistant. It's anticipated to soon be released to the public.

Scientists at Cambridge University developed a chocolate that can stop aging and prevent wrinkles called Esthechoc. Eating one bar of this chocolate per day can change the components of your skin structure to make someone in their 50s appear to have the skin of someone in their 30s, according to the developers. You can currently buy this chocolate in high-end specialty shops, so bring on the anti-aging sweets!