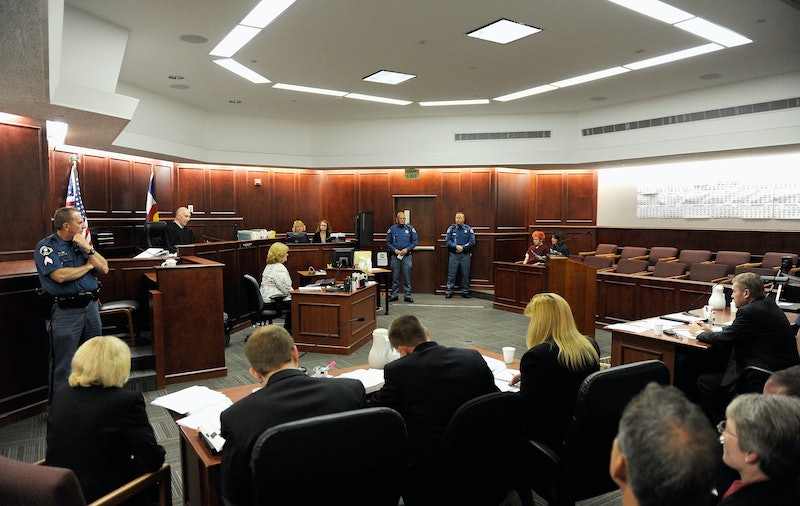 The verdict is finally in, and on Thursday, a Colorado jury ruled against the argument that James Holmes' mental health led him to carry out a mass shooting in an Aurora theater in 2012. Holmes, who was found guilty of all 24 counts of murder and more than 140 other charges, opened fire in a theater, taking 12 lives and injuring 70 others. From the beginning, Holmes took responsibility for the murders, according to CNN, but when the case went to trial, his defense claimed he was innocent by means of insanity. The jury didn't buy it.

Over the course of three years, Holmes' defense team has attempted to prove that Holmes is schizophrenic and was not in the right mindset during the attack and therefore could not be found guilty. “When James Holmes stepped into that theater in July 2012, he was insane," Holmes' defense attorney Daniel King said in court. "His mind had been overcome by a disease of the brain that had plagued him and pursued him for years.”

Despite overwhelming public opinion that Holmes was guilty, the defense sought to capitalize on the most insidious and pervasive of public myths: that mental illness is intrinsically linked to violence. It's the most popular narrative surrounding mass murders or shootings. Looking for an explanation, the public assumes someone must be mentally ill to be able to commit such atrocious acts. No one wants to admit that a shooter might just be evil — and being evil is not a mental illness.

A study by the New England Journal of Medicine indicates that 46 percent of the population believes mentally ill individuals are more dangerous than sane ones, and in cases of gun violence, a Gallup Poll shows that more people are likely to assign blame to poor mental health care than relaxed gun laws. Television shows, movies, and pop culture in general love to use the trope of the deranged, mentally ill serial killer. Almost the entire plot of the popular and ever twisted Criminal Minds crime drama involves mentally ill individuals going on killing rampages. However, the concept of mentally ill individuals being murderous is a wild misconception. Those suffering mental disease are far more likely to harm themselves than others, according to the National Alliance on Mental Illness.

An exhaustive study done by psychologist Jeffrey Swanson shows that mental illness is a leading factor in only 4 percent of violent crimes. If schizophrenia, bipolar disorder, or depression didn't exist, violent crimes within the U.S. would only decrease by 4 percent. Too often we seek to apply the label of mental illness to individuals who are perfectly sane, such as Dylann Roof, the Charleston shooter who took nine lives. Even though Roof clearly said he opened fire in the church because he's racist, some media sources still tried to pretend that the main motive was that Roof was mentally ill and deranged. Being racist is not a mental illness, and neither is being homicidal. It usually just means you're a bad person. And oftentimes, there is no further explanation.

We continuously dismiss acts of violence by labeling the perpetrators as ill or troubled, and cite this as the reason why these atrocities "couldn't be avoided." Not only does this continue to make us vulnerable to future tragedies, but it also stigmatizes the overwhelming number of individuals who do suffer from mental illness, and who will never be violent. According to the National Alliance on Mental Illnesses, one in every five people suffer from some form of mental illness or disorder. That does not mean that every one in five people are a murderous time bomb waiting to explode.

This single narrative also cements the idea that individuals can be entirely described by their mental illness. By assigning every bad thought, negative action, or even murderous rampage to mental health devalues the fact that people suffer from an actual illness. When someone has a physical illness that is easily visible or can show up in blood tests, our society treats it as what it is — an affliction, not an identity. A person has cancer, they are not cancer. So why isn't that distinction understood with mental health?

Fortunately, the jury tasked with weighing Holmes' future seemed to understand this. During the trial, two separate psychologists furnished by the defense testified that Holmes is schizophrenic. And he very well may be. But, as the prosecutors showed, he didn't attack the Aurora theater because of that schizophrenia. According to Holmes' himself, the decision was formed out of a "lifelong hatred of mankind" and was spurred by his graduate school failures. His journals also detail a lifelong "obsession with killing" that he's had since before he was 10 years old. In order to be found innocent by means of insanity, the defense must provide an extensive history of mental evaluations and evidence that the accused's actions and thoughts at the time of the offense were caused by mental disease.

Holmes only met one of these conditions. Two defense psychologists testified that Holmes is schizophrenic, in addition to providing evidence that Holmes had previously seen a university therapist and described his homicidal thoughts. But Holmes also showed remarkable clarity of thinking in planning and orchestrating the attack.

During the trial, the prosecutors provided evidence proving that he planned ahead, scouted theaters, and bought his ticket far in advance. He surveyed theaters to see which had the fewest exits and made detailed lists of the weapons he would use. He took a Vicodin before the attack, in case he was injured, and listened to techno music during the shooting spree. And when he realized that police were on his trail afterwards, he was able to adapt and change his earlier plan.

The defense argued that Holmes was confused and could no longer understand right from wrong. And although the prosecution conceded that Holmes has likely suffered from mental illness, they claimed these plans show he had great clarity of mind in planning and enacting his attack. In addition, the contents of his journals indicate that he was aware of the violence and was working to ensure he had the greatest body count possible.