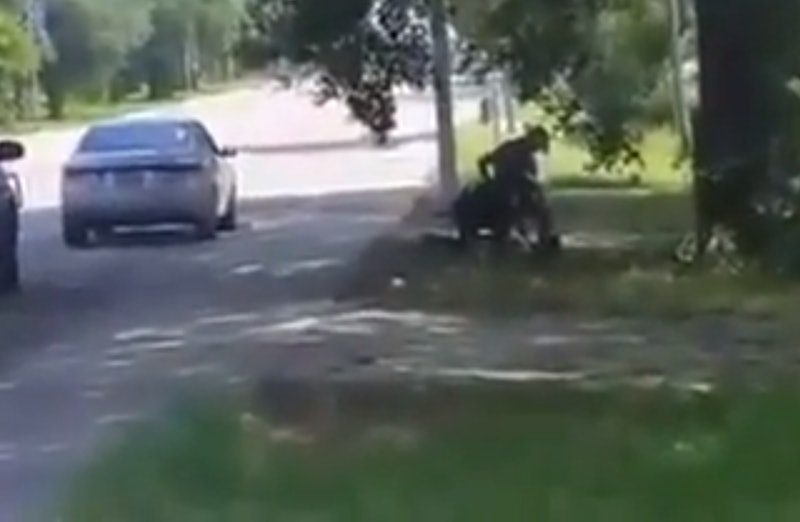 On Monday morning at 9 a.m., 28 year-old Sandra Bland was found dead in at the Texas-based Waller County Jail, northwest of Houston. Authorities said Bland appeared to have died from suicide by hanging. The Naperville, Illinois, native was arrested on July 10 for allegedly failing to signal when she changed lanes, according to the Chicago Tribune. And an uncredited YouTube upload that could contain video footage of Sandra Bland's arrest, has now surfaced on the Internet. Family attorney Cannon Lambert said he cannot confirm that the video is of Bland, but he also said that there is no evidence it isn't.

The video is slightly blurry, and the sound quality isn't great, which explains why it hasn't yet been confirmed that it is, in fact, Bland, though the audio seems to match the reports of her arrest. Although it's still unconfirmed, it might provide some insight into why police are now investigating the suicide of a woman in a Texas county jail.

It starts with two officers, who can be seen holding a woman down on the ground. "Alright, alright, this is real good," the woman says, mocking the officers for the way they're treating her. "Real good for a female, yeah. Ya'll are strong. Ya'll are real strong."

Then, one officer approaches the unidentified videographer, and the camera moves toward the ground. The officer says, "You need to leave."

"I can't hear you," the videographer replies. When the officer repeats the request, the man behind the camera responds, "Am I on public property?"

The videographer continues to film.

The second officer goes to his car, and then returns to the woman on the ground. The woman shouts, "You just slammed my head into the ground. Do you not even care about that? I can't even hear."

The officers walk the woman to the car, and she thanks the videographer for recording.

Although it's yet to be confirmed, the video seems likely to be Bland because the accounts — like the arrest solely for a simple traffic misdemeanor — match up. Bland had just accepted a job at her alma mater, Prairie View Texas A&M, where she graduated in 2009, according to the AP. Her family, who referred to her as "Sandy B.," said it doesn't make sense for their sister and daughter to have committed suicide. Bland's older sister Sharon told the Chicago Tribune that suicide was "unfathomable" for her bright, happy sister.