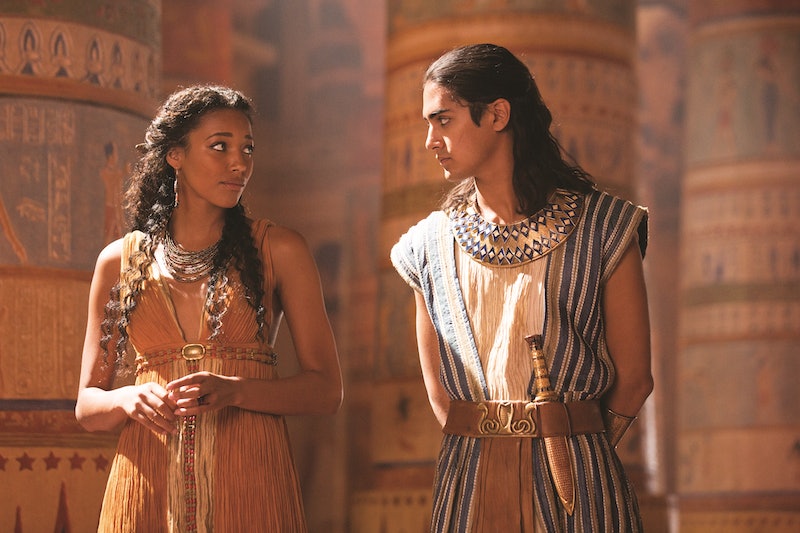 Considering that Game of Thrones pulled down a whopping 24 Emmy nominations this year and that it enjoys continued domination of pop culture in general, sweeping epics are clearly still having their moment. Luckily for history nerds, the truth is generally stranger than fiction. Because as real as that Game of Thrones pain can seem sometime, I need a reminder every once in a while that House Lannister and House Tyrell aren't in anybody's social studies textbook. So, along comes the Spike miniseries Tut to sate my appetite for some historical realness. But how much realness will I get? Will Tut return for more after its three-night run?

The miniseries stars Twisted cutie Avan Jogia as the young Pharaoh Tutankhamun, who takes Egypt's throne after the murder of his father. Because of his youth and inexperience, he's surrounded by men and women who seek to manipulate the king or exert their influence over him. One of those opportunists is Grand Vizier Ay, played by Sir Ben Kingsley — no stranger to historical drama. There's a plotting priest, general, sister, and best friend, not to mention an outside threat from an enemy civilization. Jogia plays a headstrong king who sneaks out of his palace to see his people's plight firsthand, leads his army on the battlefield, and is constantly looking over his shoulder to avoid following in his betrayed father's footsteps. Spike is marketing the series as an television event. Tut will air three nights in a row, beginning on July 19.

Trust no one, Tut.

If the series is a success, is there a hope for Tut: Season 2? Not exactly. The miniseries promises to dramatize for its audience the life and death of its compelling subject, meaning that any sequel to these episodes will be Tut-less. History itself isn't a spoiler; it's fairly common knowledge that King Tutankhamun died young. In 1922, an archaeologist named Howard Carter discovered Tut's tomb, igniting almost a century of fascination with the king. Little historical evidence of his life has been found elsewhere, leaving experts to work backwards from his elaborate resting place to put together a picture of his reign.

Tut takes the educated guessing further by fleshing out the ruler's world with extras, costumes, and a script that imagines a possible picture of his untimely death. Director David Von Ancken and writers Michael Vickerman, Peter Paige, and Bradley Bredeweg endeavor to make an individual out of a enigma — to humanize a legend who's been the subject of countless documentaries and academic studies.

And maybe this series can still continue without its main character, anthology-style. There are centuries and centuries of Egyptian history that could stand up to the cinematic treatment. Tut's creators can choose another enigmatic figure and get back to the drawing board.

More like this
Does 'Locke & Key’s Ending Mean There Could Be A Season 4?
By Sophia Moore
'The Simpsons' Will *Finally* Address How They “Predict The Future”
By Sam Ramsden
The 'PLL: Original Sin' Creators Say A’s Identity Will Be “Very Clear” By The Season Finale
By Alyssa Lapid
Everything To Know About The Musical 'Joker' Sequel – & Lady Gaga’s Role
By El Hunt and Sam Ramsden
Get Even More From Bustle — Sign Up For The Newsletter