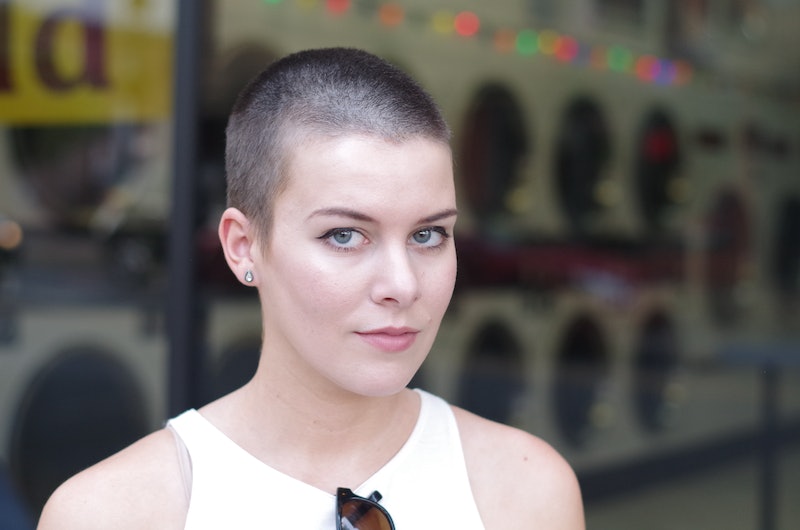 Recently I decided to shave my head. I mean, I already had a short pixie cut so it's not like I sheared 20 inches of hair off; I was used to having short hair. I even had the sides and back shaved already. It wasn't a huge change, and yet lots of people in my life were skeptical or downright negative about the idea of my going full buzzcut. Since I'm the kind of person who hates being told what to do, this honestly just made me want to do it more.

I actually had a blast shaving my head (I even made a video of it!) and I've been enjoying the freedom of no hair for the past couple of months. I can't really say that I've been enjoying some of the unsolicited comments that my shaved head provokes, however. I've received some lovely compliments from both friends and strangers alike, but I've also had to field awkward questions and rude comments. Sometimes they're well-intentioned and sometimes not, but either way I'm sure most girls with shaved heads will agree that hearing these nine things over and over again gets pretty tiring.

OK, this is a reasonable question and I'm usually happy to answer it whether it's coming from a friend or a total stranger. That said, my answer will vary depending on how the person asks the question. If someone's genuinely curious and polite, I'll save them from listening to my entire thought process behind it and just keep it light-hearted and brief: "It's great for summer: nice and cool and easy," or "I just thought it would be a fun change!"

However, occasionally someone will say it in a tone dripping with judgement: "Why would you DO that?" For them I keep my answer even more brief: "Because I WANTED to. Bye."

Considering I only had a few short inches of hair on the top part of my head before I shaved it off, no, I did not donate any hair. I know some people shave their heads to support cancer awareness and research, and that's awesome, but it wasn't even an option for me.

In my case, this was solely a personal style choice. I'm not going to waste time feeling guilty or shallow about this, so let's move on from this question please.

The first time someone outside of my social circle went in to touch my freshly shaved head, I thought she was going in for a high five and reacted accordingly. This made it seem like I was batting her hand away. It was as awkward as it sounds.

For the most part, though, I don't mind this question too much. Shaved heads feel nice! Sometimes they're soft and fuzzy, sometimes they're smooth, and sometimes they're sort of prickly. I rub my head all the time; it's fun. So I won't deny other people that fun (as long as they're not a total stranger). You absolutely should ask first though. Do I even need to say that?

My boyfriend helped me shave my head, and he loves it. But that's besides the point. I wish people wouldn't ask this question so often. It's not the 1950s anymore so let's not act like my boyfriend is the guardian of my hair and every hair cut has to get his approval. I'm a grown ass woman who does what she wants with her appearance, and he respects that (as any decent partner should).

I can see how this might be a valid concern for people who work in more conservative environments (such as teachers, lawyers, bankers...). However, not only do I work in a creative industry, but I also do most of my work from home as a freelancer. I know I'm lucky. Personally I think everyone is entitled to freedom of expression when it comes to their appearance, even in the workplace. If an interviewer refuses to hire me simply because I don't happen to have hair right now, I wouldn't want to work in that sort of environment anyway.

Plus, I mean, isn't there a bit of inherent sexism behind this question? No man is going to lose out on a job because of how short his hair is.

6. "What if people think you have cancer?"

I was surprised at how many people brought this up as a concern, like they were worried that I was misleading people. If anyone comes right out and asks me if I have cancer, I'll explain that no, I just wanted to shave my head.

Of course I can't control what other people think to themselves, but I do think alternative hairstyles are common enough now that most people would be reasonable enough not to immediately assume that I am ill. It's like assuming someone is pregnant based on their appearance: never a good idea.

And remember: If a stranger does make an assumption about you based on your appearance, that's on them, not you.

This is sexist and, frankly, illogical. There's no reason why a woman can't have short hair or a shaved head. Did you know that women can also wear pants now? Next!

8. "I'd want my girlfriend to have longer hair than me."

So many women have said this to me. It's well-intentioned most of the time (although sometimes there is definitely some shade behind it). The truth is, I'm not brave and you can do it. It's just hair and it grows back. Sure, I was a little nervous to see what it would look like and if I would like it, but I knew even if I hated it, it was temporary.

If you don't want a shaved head, that's fine. You can say that and I won't be insulted. It's not for everyone. If you do want to try it though, then just do it! You'll probably realize that it's a lot of fun. No bravery needed. Well... Maybe a little bravery to put up with some of the silly comments you'll get.