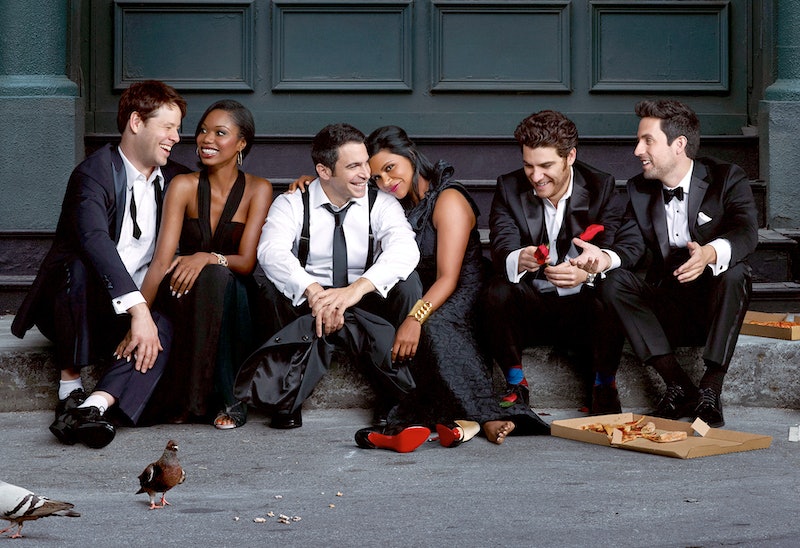 Before anyone accuses me of hating on The Mindy Project, I'd like to make one thing extremely clear: I could not be happier that the series has been resurrected, and I will watch all 26 episodes of Season 4 religiously. However, while there are a number of amazing pieces of news fans have received so far about the new season, including its super-sized amount of episodes, I'm also apprehensive of where the show will pick back up in the lives of Mindy, Danny and the rest of the gang because of the way Season 3 ended, not to mention the appearance of Joseph Gordon-Levitt in the Season 4 premiere.

It's already known that the actor will appear on the show as part of an alternate life for Mindy. In this other reality, Mindy is not with Danny. Instead she is married to Joseph Gordon-Levitt's character, who is described as a suave reality TV show producer for Bravo. I've already written about how this character and this alternate reality might affect Mindy and Danny's relationship, but that's not my only worry. Fans have seen so many changes to this show that it's hard to really know where it's going next, and what to expect. While that may be exciting for anyone who loves the show and watches it regularly, it's also insanely nerve-wracking.

In three seasons, viewers have already seen cast shuffles like the exit of nurses Betsy and Shauna as well as Mindy's previous best friends Gwen and Alex (seriously where did Gwen go?). And now Peter, who my favorite new addition to the cast, is basically gone as well, having moved to Texas to be with his wife, Lauren. Then there are the story lines that had characters take surprising turns, including the possibility of Mindy and Danny moving to San Francisco so Mindy could start a practice with Dr. Gurglar. I, for one, wish that that it had happened; obviously I would have been sad if we didn't get to see Morgan and Tamara every day, but there could have been some fascinating changes to the story with a twist like moving 3000 miles away. Still, there's no question that the move would've made for yet more craziness on the show.

But let's be honest, the real reason I'm apprehensive all has to do with Mindy and Danny. In Season 3, viewers got to know Danny's true feelings about intimacy and marriage, and saw how he showed his love for Mindy. Obviously fans knew that things with Danny and Mindy were never going to be easy, as the two don't exactly have the same personality. But their effort to make it work was really fascinating and entertaining to watch, and it made their relationship seem even more real. My worry is that with a new place for the show to live and with new, much higher, stakes, could The Mindy Project take on more changes and twists that make it suffer instead of succeed?

I hope not, and considering that the whole team is back to create these new episodes, there's good reason to think that Season 4 will be great. But I worry about where the show will take the relationship fans have grown to love so much. Viewers have seen Danny do and say things that have really made it hard to love him all the time. But what will come of Danny's trip to India? Has he changed drastically to being the kind of man Mindy has always wanted? How will the show continue to progress if Danny and Mindy get their "happy ending" with Danny showing Mindy the kind of love she's always wanted and the two of them getting married? There are just so many things to deal with during this new season, and it'd be a lot for any show, let alone one that's moving to a new network.

I hope The Mindy Project continues to try and bring fans real relationship struggles and joys without taking away the things about each character that are so easy to both love and hate. I can't wait to watch the show's new episodes, but it's hard not to get a little worried about the future of a series that love so much.