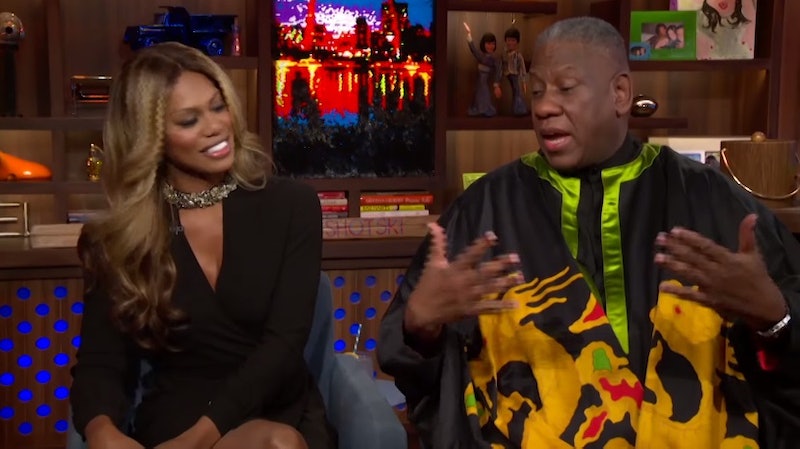 This past week, Laverne Cox was on Watch What Happens Live alongside Vogue Editor-at-Large André Leon Talley, and as seems to be the case everywhere these days, the Kardashian-Jenners were a hot topic. Talley and Cox discussed Kylie Jenner's cornrows and Caitlyn Jenner's fashion choices. But the conversation went beyond "Caitlyn looks amazing," which is a true statement, albeit not very nuanced one. Cox and Talley dug a bit deeper and discussed Jenner's style with a little more analysis.

Cox seemed like she was perhaps a bit over being asked to talk about Jenner's sartorial choices and quickly replied, “I think she looks great. I love what she’s wearing. I think she recently wore Leger — I wear Leger a lot. Go Caitlyn!” Talley went a bit deeper still and made sure to comment on the socioeconomic space that Jenner occupies, noting as Jenner herself has many times that she comes from a background of economic privilege. "I think she looks fabulous. I thought she was fabulous on the Vanity Fair cover. And I think she looks like the perfect wealthy, affluent white woman who’s privileged, and that’s important, and she comes from that kind of background," Talley said.

When host Andy Cohen asked if Cox thought there was too much attention focused on Jenner's appearance, she gave the best answer.

Cox observed that attention on all things fashion is part of being a woman, and a female celebrity, in this culture. "I'm here in clothes that were picked out by my stylist," Cox noted. Obviously she has a ton of fun dressing up and playing with clothes, but hopes that appearance is only one part of the conversation — especially when it comes to trans women.

“I think it’s important, particularly when we talk about women, and trans women even more particularly, that we focus on who the person is beyond what we look like. I like to think I have a lot more to offer beyond what I look like," Cox told the host.